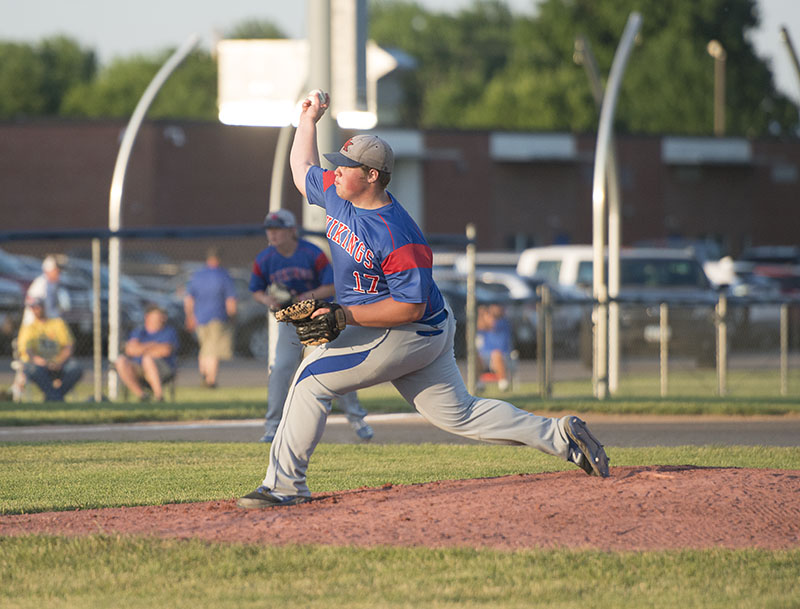 Northwood-Kensett junior Jace Gentz fires in a pitch at home against Nashua-Plainfield Wednesday night. Gentz gave up four runs and struck out five before being relieved in the top of the fourth inning. - Tyler Julson/Albert Lea Tribune

After giving up four runs in the first inning, the Vikings found themselves outmatched as the Huskies went on to win in five innings, 11-1.

A walk, a double and two errors led to four runs in the top of the first inning for the Huskies. The Vikings responded with a two-out single from senior Ethian Tasker, however, junior Cade Hengesteg was thrown out on a play at third base to end the inning.

Northwood-Kensett found its footing in the second inning, sitting down the first three batters faced with a pop fly, a strikeout and a ground ball.

The Vikings again struggled to find base runners in the bottom of the inning with sophomore Jace Gentz being the only player to safely reach first base. 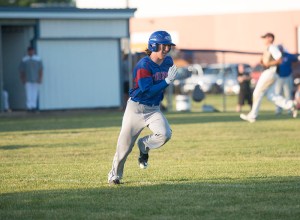 Senior Caden Schrage runs out a flyball Tuesday night in the first inning of the 11-1 loss to Nashua-Plainfield. – Tyler Julson/Albert Lea Tribune

Northwood-Kensett held Nashua-Plainfield scoreless once again in the third inning, with Gentz, the starting pitcher, striking out two of the three batters of the inning.

Seniors Austin Efflendt and Caden Schrage both recorded singles in the bottom of the third, but neither were able to come across for a score.

Despite finding a stride defensively, the Vikings were forced to make a change at pitcher with Gentz reaching his pitch count limit.

Junior Brandon Varner was brought in for relief with one out in the top of the fourth. A couple of close calls at first base led to base runners for the Huskies before a bases-loaded walk and  back-to-back hits scored six runs and pushed the Huskies’ lead to 10 runs.

The Vikings were finally able to get a run on the board in the bottom of the fourth after Varner was walked and brought around on a single hit by Gentz.

However, Nashua-Palinfield extended the lead back to 10 in the next half inning, forcing Northwood-Kensett to score at least one run to extend the game.

Junior Carter Severson reached base on a single, but back-to-back pop outs ended the game after five innings.

The Vikings fall to 2-1 on the season and will play again Monday night when they host the Warriors of Rockford.