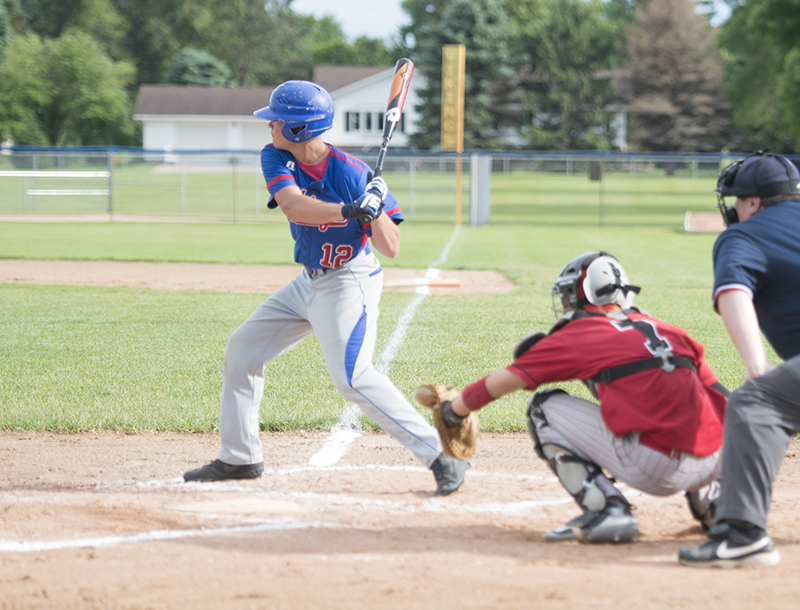 Northwood-Kensett junior Ethian Tasker prepares to take a swing at a pitch in a game during the 2019 season. Tasker, along with his fellow returning juniors will be a big part of the Vikings’ success this year. - Tyler Julson/Albert Lea Tribune

After their best season in over a decade last year, the Northwood-Kensett baseball team is hoping to keep its upward swing going into the 2020 season.

Last season the Vikings finished with a 13-13 record, marking the first time they had finished with a .500 record or better since before the 2007 season. They ended the season with a loss to the Bison of North Iowa in the first round of substate and in 11th place of the Top of Iowa Conference.

Due to the season being noticeably shorter this year, head coach Jeff Ferstein said they had to make some adjustments from what they wanted as a team at the end of last season.

“The goals we have set as a team had to be readjusted a bit from what was said at the end of last year,” Ferstein said. “But ultimately we have chosen the goal of being what we call in team meetings ‘all in’ and improving ourselves each practice and game.”

Ferstein said he expects the pitching staff to be the biggest strength of the team this season, as there will be two returning starters and multiple good arms coming out of the bullpen.

While the challenges of starting the season in the middle of a pandemic have presented new guidelines and rules, Ferstein said the biggest challenges have come from another aspect.

“I would say the first practice of the season went well considering all of the obstacles that are in place for COVID-19,” Ferstein said. “The hardest part for me was less about the guidelines and more about making sure guys didn’t get injured. With all the time off and no spring sports, for some of those guys this was their first time running since basketball season. Way more sore legs and cramps this year than in previous years.”

The Vikings start their season at 7:30 p.m. Monday with a game on the road against the Bearcats of North Butler.

Schedule may change throughout the season. For the most up to date schedule, visit topofiowaconference.org/public/genie/97/school/753/.