Walz: Mask mandate ‘on the table’ 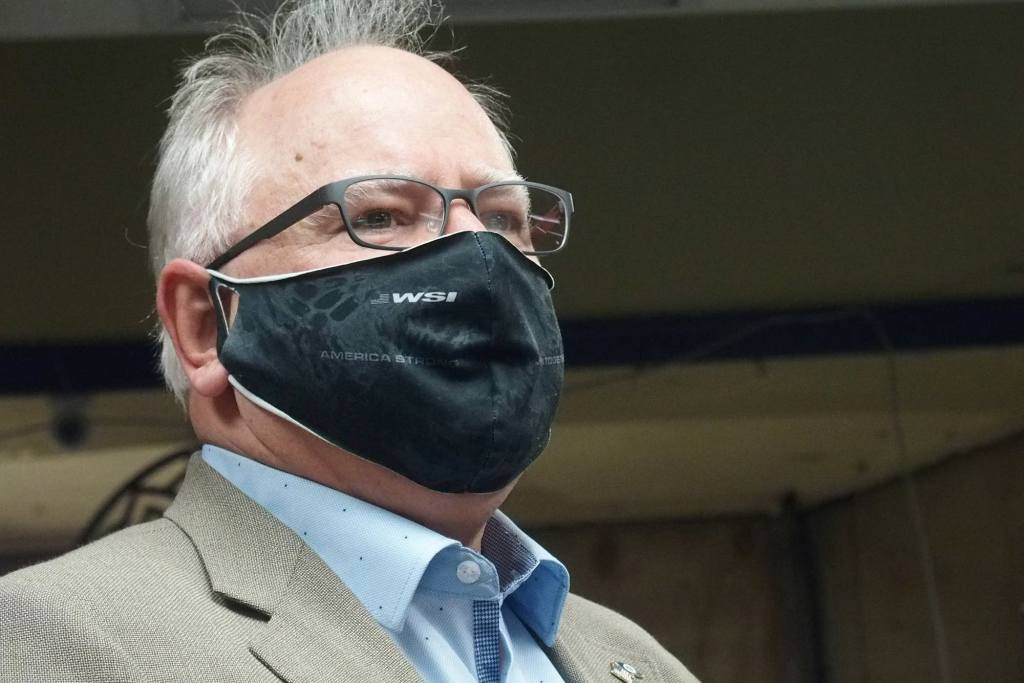 A statewide mandate requiring all people to wear masks while in public is “on the table,” Gov. Tim Walz said Monday.

While he didn’t give an indication on when he’d decide, the governor said such a move would offer public health benefits while helping businesses that are struggling to enforce their own mask rules.

Walz’s argument: “If you are for the economy opening up and for the state to take away some of the limitations on your businesses, the surest way to do that is to wear a mask,” he said.

The governor’s remarks came as the number of confirmed COVID-19 cases continued rising, with people in their 20s continuing to make up the largest number of cases.

Here are the latest coronavirus statistics:

Minnesota is now at its lowest level of hospitalization utilization since May 1.

Still, the state continues to see a “peak and valley” pattern in terms of new positive cases. State health officials said that the number of positive tests reported today is the result of transmission that happened two to three weeks ago — and they warned Minnesota to be prepared for the possibility that that number might rise.

Also Monday, Walz announced that Minnesota now has the capacity to test 20,000 Minnesotans for COVID-19 in a single day.

The announcement marks a milestone in the state’s “moonshot” fight against the coronavirus. In April, Walz set a goal of ramping up testing capacity to 20,000 diagnostic tests and 15,000 serology — or antibody — tests daily. The goal, however, hasn’t resulted yet in that many tests per day being done. The highest daily total has been about 17,000.

Walz said the development puts the state in position to understand how prevalent the virus is in Minnesota — which will be the only way to control the virus until a vaccine is available.

Health commissioner Jan Malcolm said Monday there are likely more than 200 positive cases in Mankato and at least 100 in Minneapolis tied to bar-hopping outbreaks, an increase from past estimates.

All those sickened were in their 20s and had gone to the Mankato bars Rounders and The 507, or Minneapolis bars Cowboy Jack’s and Kollege Klub.

Minnesota’s early sacrifices to limit COVID-19’s spread “will be undermined if we don’t get cooperation from all Minnesotans, especially younger Minnesotans, who are most active and social,” Kris Ehresmann, the state’s infectious disease director, told reporters.

Social media from those bars shows they were crowded, with no room for social distancing, and people who were standing and not masked, so not following the state guidance, Ehresmann said.

The median age of confirmed cases in Minnesota has been dipping and is now just under 40 years old.

Another surge in the results comes from an outbreak at the state prison in Faribault, which has recorded 206 positive tests and two deaths among inmates since its first case was recorded on June 3. The Faribault prison had 1,718 inmates as of Saturday.

The latest death at the Faribault prison was Leroy Bergstrom, 71. He was diagnosed with COVID-19 on June 10 and had been hospitalized in critical condition since June 16.

In response to the outbreak, Minnesota’s prisons have limited prisoners’ social interactions and distributed masks. Some prisoners have also been released to reduce crowding, with the state prison population falling from about 8,900 on March 1 to 7,962 on June 25.

Many of the outbreaks outside the Twin Cities metro area are focused around meatpacking plants. Officials have intensified testing in those hot spots, uncovering more infections.

That includes Mower County in southeastern Minnesota, where there were 868 confirmed cases as of Friday.

Mower County is home to Hormel Foods and Quality Pork Processors. Both have been partnering with Mayo Clinic to ramp up employee testing.

While some of Mower County’s positive cases are associated with people who work in the facilities and with the people they live with, county officials say they are also seeing transmission among people who live in the county but work in other counties where coronavirus is present.

Nobles, in southwestern Minnesota, reported 1,643 confirmed cases Friday. About 1 in 14 people now have tested positive for COVID-19 in the county since the pandemic began, although the count of new cases has slowed considerably in recent weeks.

Worthington’s massive JBS pork processing plant was the epicenter of the Nobles outbreak. The JBS plant shut on April 20 but has since reopened with expanded hygiene and health monitoring measures.

Similar problems have been reported in Stearns County, where COVID-19 cases tied to two packing plants — Pilgrim’s Pride poultry plant in Cold Spring and Jennie-O Turkey in Melrose — skyrocketed in May.

An undisclosed number of workers at both plants have tested positive for the virus. There were about 55 confirmed cases in Stearns County in early May. By Friday, confirmed cases were at 2,156 with 19 deaths.

Kandiyohi County in west-central Minnesota is also dealing with a significant caseload more than two months after officials with the Jennie-O turkey processing plant there said some employees had tested positive for the coronavirus.

As of Friday, the Health Department reported 564 people have now tested positive in the county, the same as Thursday. The county had confirmed three COVID-19 cases in late April.

Cases have also climbed noticeably in Cottonwood County (130 cases), home to a pork processing plant in Windom, and in Lyon County (289 cases), around a turkey processor in Marshall.