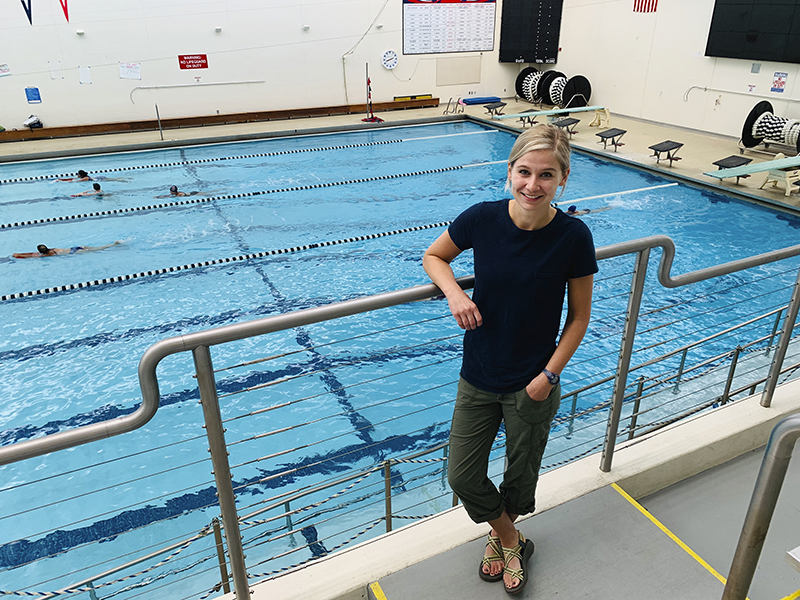 Angel Welch will step into the role of head coach for the Albert Lea girls' swim and dive team this fall after spending two seasons as the assistant coach. - Provided

After spending two years on the side of the pool as the assistant coach, Angel Welch will move up to take on the role of head coach of the Albert Lea girls’ swim and dive team starting this fall.

Welch, a teacher in the Albert Lea English language arts department since 2016, has been in and around the pool for most of her life.

“I pretty much grew up on a pool deck,” Welch said. “My dad was the aquatic director at the YMCA in Winona, so I’ve been around pools and coaches my entire life.”

Welch went to high school in Winona, where she was a state qualifying swimmer. Though she would have liked to continue her swimming career into college, Welch said a few injuries kept her on the sidelines. However, she continued to coach in the summers throughout college.

As an assistant to former Albert Lea head coach David Voller, Welch will not have some of the struggles some first-year head coaches might face. She said the relationships she already has with a lot of the girls on the team will play as a nice advantage.

“Being the assistant for the past two years, I’ve learned a lot about the girls,” she said. “What motivates them and where they’re at in the sport. It also gives me insight into where they could be in the next couple years.”

Welch said she is a coach who likes to focus on the small details. She said teaching the basics of swim techniques to the younger swimmers is key to their success. With the older swimmers, it’s more about finetuning their strokes and focusing on little adjustments that can make them that much faster.

“It’s about well-roundedness,” Welch said. “It’s about the sport, but it’s also about growing and developing as students and as people as a whole. I try to focus on that, too.”

While the future of the 2020 season taking place is still up in the air, Welch said she is keeping the mindset that they will be together when the season starts. She said there are still a lot of unknowns, but she is hopeful they will be able to have something of a season.

Welch has already been working with some of the team in the summer program, both with physical workouts and setting goals for the upcoming year.

“I think it would be great to return swimmers to state, that’s always a good goal to have,” Welch said. “We have a young team, but we have some swimmers who are getting very good and it would be great if we could send a few of them to state this year.”

Incoming senior Jaeda Koziolek is the lone Tigers swimmer with state meet experience. Koziolek will look for her sixth consecutive trip to the state meet.

Welch also included becoming section and conference academic champions and getting as many swimmers to achieve their goals and set new personal bests as some of her goals as a coach.

When she isn’t coaching or teaching, Welch said she loves being outside. According to Welch, she spends a lot of time fishing, biking and running with her husband in different parts of Albert Lea.

Welch and the Tigers are slated to begin competition Sept. 3, when they host Rochester Century. However, plans could change before then based on recommendations from the state and announcements from the Minnesota State High School League amid the COVID-19 pandemic.