A shared passion for fishing 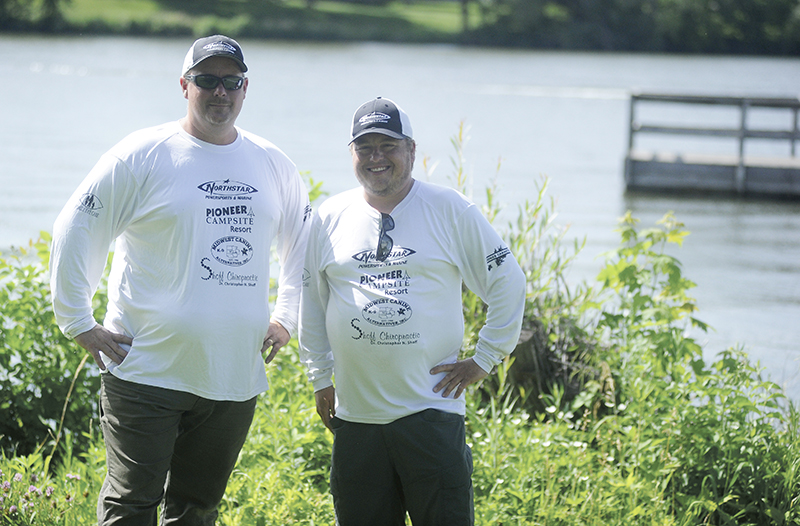 When it comes to fishing stories, Josh Jones of Austin and Tony Flatten of Albert Lea have one they’ll be telling for a long time.

The two men, who met at Pioneer Campsite in Wabasha, went up against some of the top fishermen in the business and proved their worth as they finished in fourth place at the AIM Weekend Walleye Series Quest for the Best Shootout near Red Wing from June 19 to June 20.

The tournament featured 46 teams, and 22 of those teams were pros.

“We were a little intimidated when I read the list. I called Tony Thursday and I said ‘We’re screwed.’ These are all guys that we watch on TV,” Jones said.

With the help of sponsors, Flatten and Jones had to pay $1,000 to compete in the tournament and they were able to win a prize of $5,000. Chris Kujawa and Joe Kujuwa took first and took home $15,000.

Flatten said he never thought he would be able to compete with some of the pros who were in the tournament, but he’s sure glad that he did. While fishing is a lifestyle for some, Flatten and Jones usually stick to fishing on the Mississippi River whenever they happen to be camping near it.

“We try to find out every tournament that’s going on along pool number four, even the ones held by small clubs. This was the biggest one we’ve competed in by far,” Flatten said. “We will be on any and everyone that comes to the Mississippi. We do it because it’s local where we camp. It allows us to afford to do it. It’s in my family’s blood and Josh’s family’s blood. It’s our sport.”

Jones and Flatten were able to each have their best day of the tournament as they finished with a weight of 29.19 pounds. On the second day, their total of 16.70 points kept them in fourth place.

“We didn’t realize we were going to be in fourth after the first day and day two is way harder, because you pretty much hit your target on the first day,” Flatten said.

Jones and Flatten have now been fishing together for three years, and it all started when they were camping in Wabasha.

“Tony was heading out fishing one day and I talked his ear off,” Jones said. “The next year we both kept in contact and we fished together a couple of times. We both have a passion for it.”

While patience is a virtue for anyone who fishes, Flatten said you also have to learn to work with the river.

“If you fish in a river, make sure you fish with the current. It’s easier,” Flatten said. “Night crawlers and leeches all do the quick, just keep hunting until you find them.”

Anyone can watch videos of Flatten and Jones fishing by looking at Flatten’s son Elliot Flatten’s YouTube channel.