Albert Jean Reynen passed away June 26, 2020, in Albert Lea, Minnesota. Born May 26, 1923, near Killduff, lowa, to Pearl A. (Rozendaal) and John Dirk Reynen, Al moved with his parents to a farm near Hollandale, MN, in 1925. Al graduated from Albert Lea High School in 1941 and began farming with his father. On March 23,1945, Al married Doris Ilene Krull in Corsica, South Dakota. 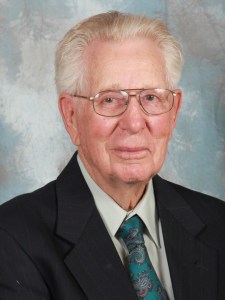 Throughout his life Al farmed raising potatoes, onions, sugar beets, corn, soy beans, peppermint, asparagus, spinach, string beans and cucumbers. lnitially he farmed with his father, but from 1946-1986 he farmed with his brother Willis. He also farmed with his son Larry from 1974 until his retirement in 1989.

As an active community member, Al was a 4-H leader and in 1983 with his wife Doris was named a meritorious 4-H leader. Al served as the mayor of Hollandale and helped organize the Hollandale Heritage Huis Museum. He was also chairman of the local Watershed Steering Committee and spent a term as a member of the Hollandale Commercial Club.

ln 1992, Al served as a member of VOCA, Volunteers for Overseas Cooperative Assistance in Bulgaria where he worked with local farmers.

Since 1995, Al and Doris spent their winters at Avion Palms in Bowling Green, Florida, where Al continued his community service as president of the park and chapel committee director.

Al was preceded in death by his parents, an infant brother, his daughter Kathleen, his brothers Willis (Hazel) and John (Judy), his sister Antoinette Elbring, his brothers-in-law Arent Mondeel, Martin Ferwerda and Robert Anderson.

Funeral arrangements were under the direction of Bayview/Freeborn Funeral Home of Albert Lea. Burial was in the Hollandale Cemetery.

The family is grateful for the compassionate care given to Al by the caregivers at the Good Samaritan Skilled Nursing Facility in Albert Lea.

Memorials may be sent to the Hollandale Reformed Church, Hollandale Christian School or a charity of your choice.