ST. PAUL — The Minnesota Bureau of Criminal Apprehension and Owatonna Police Department are seeking the public’s assistance in locating a person of interest in connection to a Sunday homicide at Dartts Park in Owatonna. 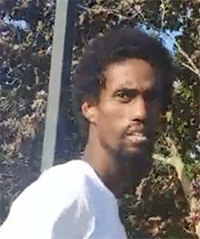 According to a report form the Minnesota Department of Public Safety, Owatonna police officers responded to a 911 call of a stabbing at 5:17 p.m. Sunday at Dartts Park in Owatonna. They located an unconscious man on the ground with what appeared to be stab wounds.

Attempts were made to provide medical aid, but the victim was pronounced dead at the scene.

The Southern Minnesota Regional Medical Examiner’s Office identified the victim as Mohamed Aweis Mohamed, 32, of Owatonna and confirmed stabbing was the cause of death.

The BCA identified 28-year-old Hassan Nur Hassan as a person of interest. He is described as being 5 feet, 11 inches tall and weighing approximately 140 pounds with brown hair, brown eyes and a goatee. Investigators believe he is driving a tan 2000 Honda Accord four-door sedan with Minnesota license plate EGG087.

Investigators ask that anyone with information on Hassan’s whereabouts, or who witnessed or has information about the incident, contact the Owatonna Police Department at 507-444-3800 or dial 911.

The investigation is ongoing.

See what happened yesterday in the public safety report here.