Private funeral services for Delores Brandt will be on Sunday, July 12, 2020 at the First Lutheran Church, Albert Lea. Pastor John Holt will officiate. Interment will be at St. John’s Lutheran Cemetery in South Branch Township. A livestream of the service will be available on her obituary page at Bonnerupfuneralservice.com beginning around 1:00 PM Sunday. 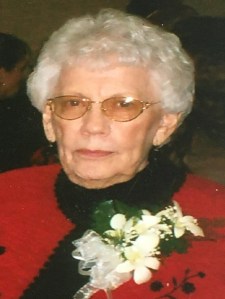 Delores passed away peacefully on Tuesday, July 7, 2020 at St. John’s Lutheran Community – The Woodlands. She was 93 years old.

Delores was raised on the family farm near St. James where she attended school at one of the local country schools. A hard worker, she began helping her mother as early as she could by taking care of the household chores and cooking. As an early adult, Delores took on a position at Mankato Hospital where she became one of the cooks.

She met Ruben Brandt and on Valentine’s Day, 1959, they were married. Their union brought them one daughter and two sons. The couple later divorced.

A lover of dance, Delores would often be found with her kids on the dance floor. When she and Ruben would finish their dances, Delores would bring her sons out to dance with her some more. Family and friends could count on a few things when you saw Delores, the first was that she would have the Lawrence Welk show on, the second was that she’d have a crossword nearby and finally, you would always know what was on her mind.

Independent was used often to describe Delores. Although she put family first, she tried to do many things on her own, including moving furniture around. She was a spunky, outspoken gal who was proud to be a ‘stubborn German’ and was always there to support her family.

She is preceded in death by her parents, Hugo and Martha; and siblings, Annette Sexe, Martin Kueker, Adolph Kueker, Werner Kueker, Marthy Frank and Gene Kueker.