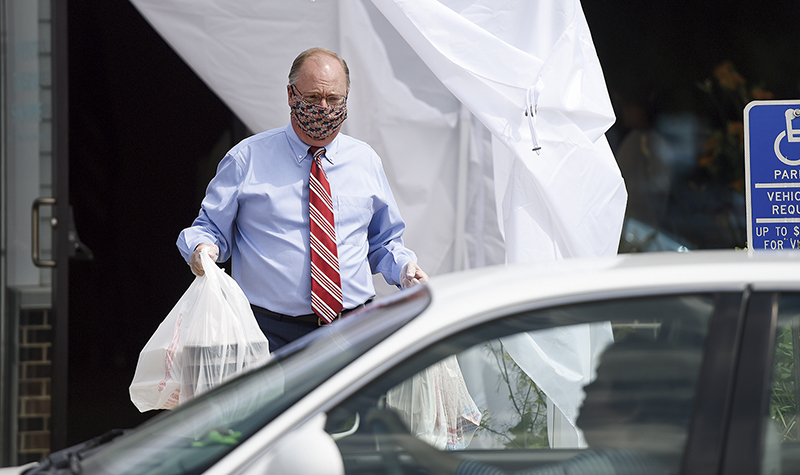 “We want to let people know we support our small businesses and our police,” Hagedorn said.

While at the Senior Center, Hagedorn helped volunteers with distributing curbside meals.

“One of the reasons we wanted to come down to the Senior Center is that they’ve been so good over the years feeding the local seniors,” he said. “Now that they can’t do it in person, they’re doing the curbside pick-up.”

While at the Senior Center, Hagedorn learned that federal funds distributed through the CARES Act’s nutrition program were being utilized to provide the meals. Hagedorn had a hand in the funding distribution of the CARES Act.

“(Senior Center volunteers) say that it really is helping people, sending out as much as 500 meals a day, and it seems to be quite an operation here of volunteers and others helping the community,” he said.

Hagedorn spoke of concerns surrounding the pandemic, such as its effect on rural hospitals.

“People have been missing routing care at hospitals; if I had missed a routine check-up over a year ago, I wouldn’t be talking to you today,” he said, referencing his stage four kidney cancer diagnosis from early last year. “We want to let our rural hospitals know they can stay in business and provide quality medical care. If they can’t survive, we’ll have to go a long way to get that care.”

Hagedorn also spoke of addressing the economic impact the pandemic has had on farmers. 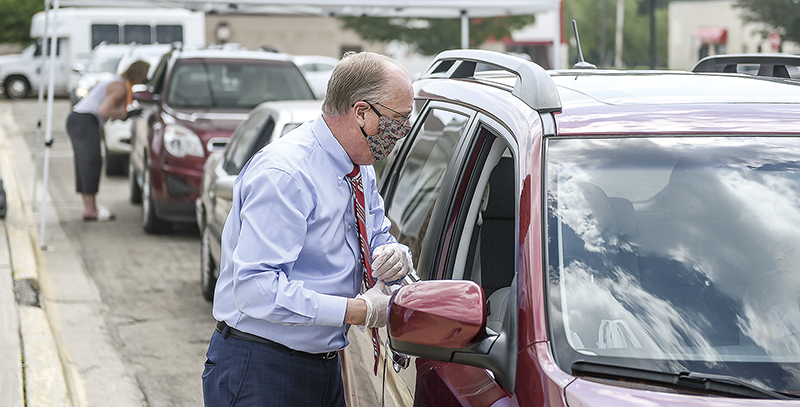 “Our livestock farmers have been in trouble because when the restaurants closed, the demand for meat products was down,” he said. “Then we had packing plant disruptions. I introduced two bills to help mitigate the damage for our pork farmers. We have the second most hog farmers in the country here in southern Minnesota and we’re doing other things for livestock. We want to make sure if our farmers sold in depressed markets or euthanized animals and were not able to use them for meat supply, we’re going to mitigate those damages. We’re going to get that into one of the future bills.”

“For the biofuels industry, the demand has been down as far as driving, thus the demand for ethanol and biodiesel has been down,” he continued. “One of the best things we can do is get the economy open and get that demand up, but we also know that industry and our soybean and corn farmers are very important and we’re not going to let them down either. We’ve had some payments go out through legislation we passed many months ago. We’re working with the Department of Agriculture to resupply the Commodity Credit Corporation.

“We want all of our farmers to be sustained through this because they’re dealing with this through no fault of their own. We don’t want to see any of our independent farmers go out of business because if they do, they’ll sell out to bigger operators. Bigger operators aren’t bad people, but it means fewer people working the land and living in our communities. It puts a lot of pressure on a community and undercuts our food supply.”

Hagedorn was critical of Gov. Tim Walz’s executive orders, accusing him of favoring large box stores by letting them stay open during the first few months of the pandemic while requiring some small businesses to close down. He also criticized Walz for closing churches and placing restrictions on open worship.

“He was treating rural Minnesota like it was Minneapolis and St. Paul,” he said.

As the November election gets closer, Hagedorn said the greatest issue will be the general future of the county, accusing Democrats of giving in to radical elements.

“They don’t like the history of our country to the point they want to tear down memorials, even the Washington Monument and Jefferson Memorial,” he said. “They’re bent on changing the country. I’m with President Trump in saying this is the best country in the world and we have to preserve and protect it. The U.S. has done more for the nations of the world than the world has done for the U.S.”

Hagedorn added that he supported Second Amendment rights and accused Democrats of wanting to defund the police.

“I appreciate and respect our law enforcement officers and we want to see that people and property are protected,” he said.

“President Trump and Republicans helped build the strongest economy until the pandemic struck,” he said. “The only concerns rural Minnesotans had was being able to find workers. The Democrats are supporting high taxes and high regulations. I don’t think our people want to go back to that.”

“We’ve been doing work for the people and there is a clear cut difference between what is going on in the parties,” he added.