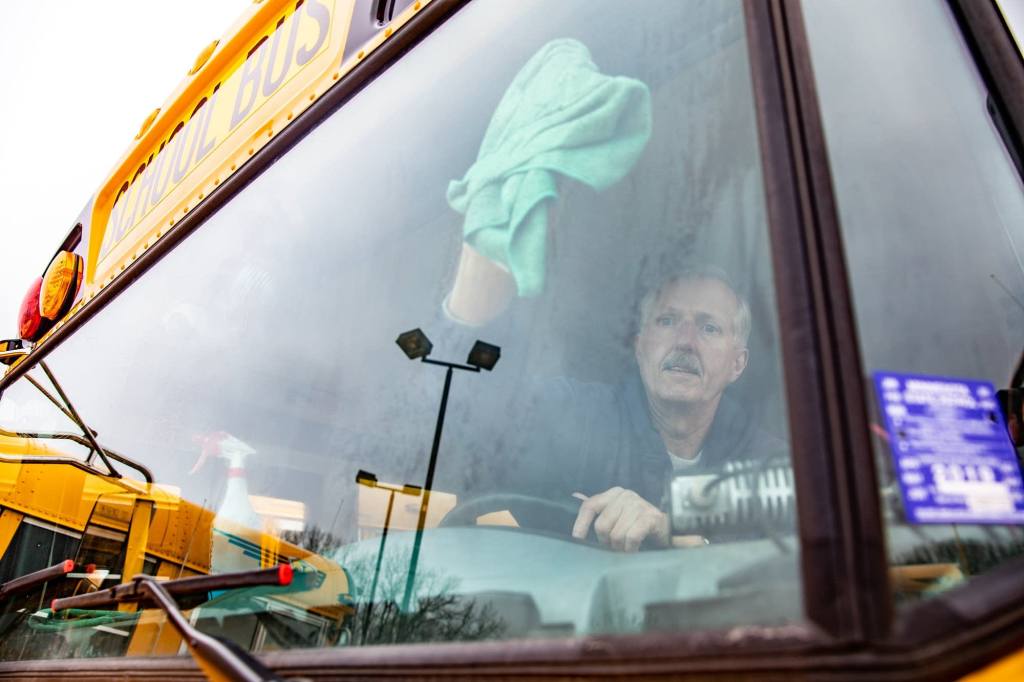 Bus driver Charlie Clowes cleans the windshield of his school bus in North St. Paul on March 18, before the buses go out to deliver meals to students. Gov. Tim Walz is expected to give districts and charter schools guidance to help them make decisions on the upcoming school year. Evan Frost/MPR News file

Gov. Tim Walz on Thursday is expected to give districts and charter schools guidance on the upcoming school year to help them make decisions on reopening this fall.

The governor said he wants students to be able to return to in-person classes, but to do it safely.

“Our guiding principles are to keep our children and our staff in the buildings safe,” Walz told reporters Wednesday. “And our second goal right behind that is to get our children back in the schools, especially our littlest learners, if at all possible.”

Walz said reopening the schools shouldn’t be driven by politics, but by science. His announcement comes as hospitalizations and intensive cases continue to climb — and on the heels of his statewide mandate requiring people to wear masks in public indoor spaces.

“If there are communities across the state that are really wanting to see their children back in school and want to see them stay there, wear your mask,” he said. “That is the biggest thing we can do.”

In June, the state health and education departments told districts and charters to prepare for three different scenarios to resume school in the fall: distance learning, in-person learning and a hybrid of those two options.

Walz has said the standards he’ll provide will give schools flexibility to work within those standards as they make their own decisions.

In recent weeks, Walz has laid out a possible scenario of having younger grades back in classrooms while offering a hybrid scenario for middle school students and full-time online learning with older students. But the governor has not committed to that plan and admitted it was complicated, especially for families with children spanning various ages.

North St. Paul-Maplewood Superintendent Christine Tucci-Osorio said she and many other Twin Cities metro area superintendents want as much specific guidance as possible.

“There’s a lot more interest in having strong guidance from the top because we’re in a more densely populated area,” Tucci-Osorio said, “There’s going to be so many people who feel differently about it. … If it’s left completely to local control, there will be a lot of pushback.”

John Cselovszki, superintendent of Sleepy Eye Public Schools, said he, too, wanted specific guidance, but with some room for districts and locally elected school boards to make decisions based on their circumstances.

“If you compare it to Hennepin County, we don’t have those case numbers that they are experiencing,” Cselovszki said. “But give them some pretty specific guidance because, if it’s vague guidance it’s not a good thing either because then we don’t know for sure what we need to do.”

Minnesota districts have been making their fall plans for months already, and many have been communicating their decisions and plans to families. Minneapolis Public Schools has already announced they will likely start the school year remotely.

Neither scientists nor officials fully understand the public health implications of reopening schools for in-person learning during the coronavirus pandemic. While some children have become seriously ill with COVID-19, most tend to have milder symptoms than adults. And researchers don’t yet have a good handle on the long-term impacts of getting infected with the virus.

Minnesota public health officials have, however, been keeping track of COVID-19 cases in those child care programs that have been open since March. Close to 1 percent of Minnesota’s licensed child care programs have had at least one confirmed COVID-19 case. The majority of cases in those programs have been among staff, and state health officials say there’s not a lot of evidence so far that those staffers got the virus from other employees or from kids in the center.

Whatever state officials announce on Thursday, it will have far-reaching impacts on children, families, educators and businesses in Minnesota. No scenario will be perfect, and it’s also sure to disproportionately affect students of color and their families.