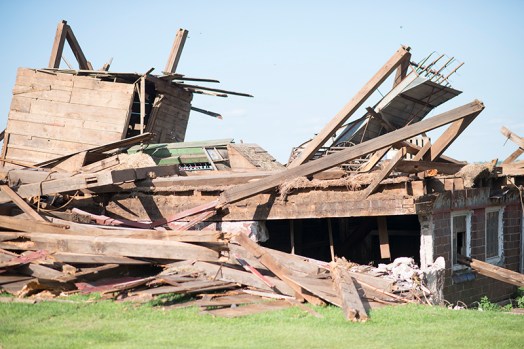 Severe weather destroyed Steven Abbe’s barn early in the morning July 18. Abbe said he suspects it was a tornado that came through his property. - Tyler Julson/Albert Lea Tribune 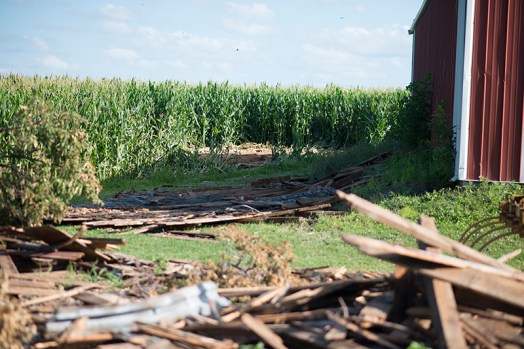 Large sections of the barn were picked up and thrown in all directions from the foundation. Some pieces struck other buildings on the property causing dents and other damage. - Tyler Julson/Albert Lea Tribune 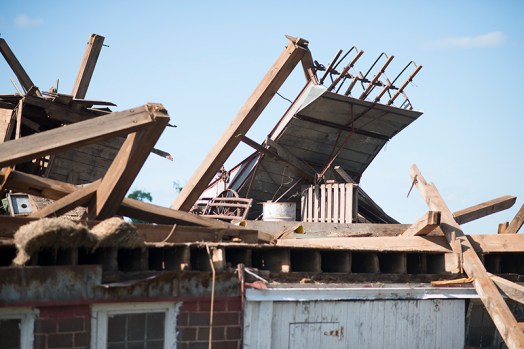 The barn was used as a storage spot for old farm equipment that was no longer in use. - Tyler Julson/Albert Lea Tribune 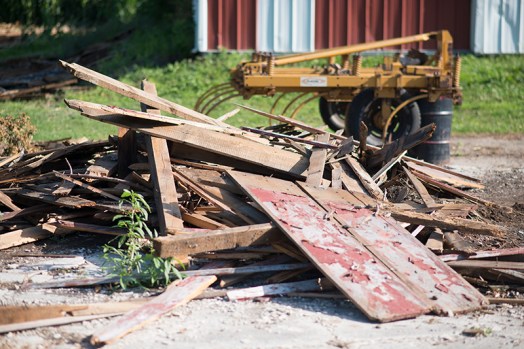 Abbe had the help of many friends and family members to clean up the debris, putting a lot of it in piles around the original foundation. - Tyler Julson/Albert Lea Tribune 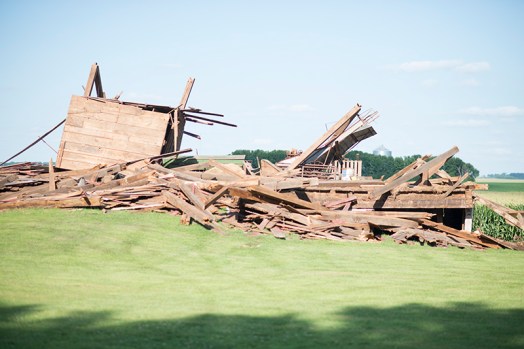 What remains of a barn destroyed by severe weather on July 18. The barn was built around 1899 according to Abbe. - Tyler Julson/Albert Lea Tribune 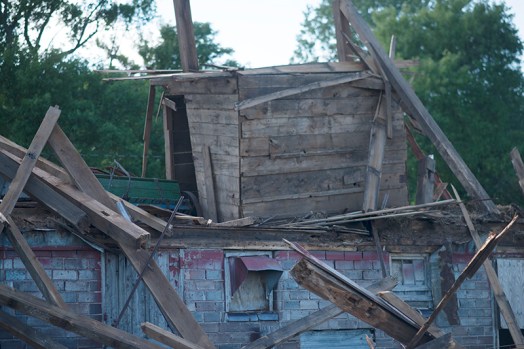 Abbe said he plans to sell the wood to a business in Owatonna who uses the barn wood to make furniture. - Tyler Julson/Albert Lea Tribune 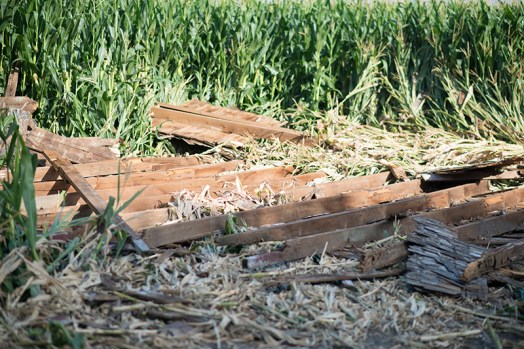 A large section of the barn's roof rests in the nearby cornfield, about 25 yards away from the foundation. - Tyler Julson/Albert Lea Tribune

ALDEN — A stormy Saturday morning started out like many other mornings for Alden resident Steven Abbe — with a fresh cup of coffee. What began as an anticipated Saturday morning storm on July 18 quickly escalated into a scary severe weather situation, sending Abbe into the basement and flattening his century-old barn in the process.

Around 5:45 a.m. Saturday morning, Abbe’s neighbor across the highway, Jeff Linn, remembered he had left his lawn mower outside and wanted to get it in before it started raining too hard. Linn recalled hearing the weather forecast the day prior and wasn’t expecting much more than 25 mph winds and some rain. When he stepped outside, he realized it was much more severe than that.

“I came out and looked at my trees completely bent over, the wind was probably blowing 75 miles an hour,” Linn said. “All of a sudden I heard a huge roar and the trees bent even further and it turned to a total whiteout. You couldn’t see anything more than 10 feet in front of you. I ran for the basement and stayed there for three, four, five minutes.”

When Linn came back outside, he said the wind was still blowing but the worst of it had passed. He had some tree limbs down all over his yard and his sweet corn patch was mostly flattened. He looked across the road to Abbe’s and noticed a completely different landscape.

Abbe, enjoying his cup of coffee in the kitchen of his farmhouse across the road, started to hear the wind make a whistling noise and like Linn, he decided to head for the protection of the basement.

When he emerged from the basement, Abbe looked out his window to see his barn completely demolished with debris scattered all throughout the property and into the neighboring cornfield. Large sections of roofing and walls had been picked up and thrown nearly 100 yards from the foundation.

The barn, built in 1899, was dwindled down to its brick foundation with nothing but debris strewn across the top. Luckily for Abbe, the barn wasn’t used for much other than storage of old equipment that also wasn’t used anymore. However, the airborne wreckage did cause damage to other buildings on his property, putting large dents and taking off the doors on a nearby machine shed.

Both Linn and Abbe were baffled to learn in the coming days that all the other farms in the area had virtually no damage at all.

“It was just me,” Abbe said. “I think it was a tornado because of that whistle I heard. I think it came down and went right back up.”

Abbe said if it was straight-line winds that caused the damage, the debris would have mainly been thrown in one general direction. However, the fact they picked up large sections of barn in every direction of the foundation led him to believe it was a tornado.

Abbe said he plans to sell the wood to a business out of Owatonna that uses old barn wood to make furniture.

Many friends and family members showed up to help Abbe with the clean-up process in the following days. While a majority of the small pieces have been picked up, there is still plenty of work to be done with large sections of the century old barn scattered around the property.