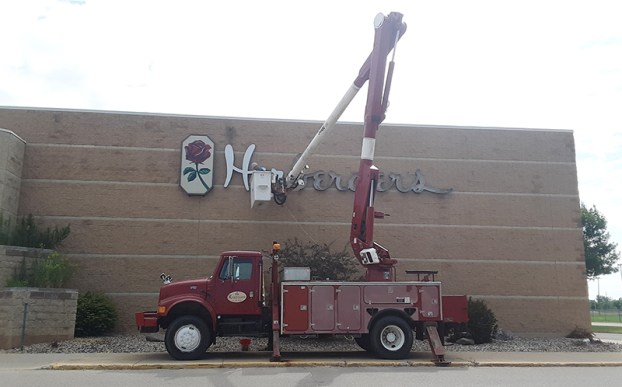 The Herberger's sign is removed earlier this month at property owned by the Albert Lea Healthcare Coalition that is expected to become a new MercyOne clinic. Provided

The Albert Lea Healthcare Coalition is getting closer to its fundraising goal for a new clinic after two Albert Lea High School alumni donated a combined $850,000 toward the project in the last few weeks.

Coalition trustees Brad Arends and Steve Tufte presented an update on the planned clinic to the Albert Lea City Council on Monday during the council’s work session.

Arends, who is serving as president of the coalition, said one of the alumni, who wishes to remain anonymous, donated $150,000, and the second alumni, Dale Larson, donated $700,000. He noted both donors no longer live in Albert Lea but have fond memories of their time here.

Arends noted how important and gratifying it is to have big donors supporting important projects in a town they once called home decades ago.

Tufte said with the donations, the coalition has raised about $4.7 million, which includes a $1 million donation from Albert Lea High School alumni John Morrison that was used to purchase the former Herberger’s building for the clinic; about $800,000 in donations from local businesses and individuals; about $1 million in pledges from local businesses and residents through the end of 2022; $150,000 from the Albert Lea Economic Development Agency in the form of a low-interest loan; and a commitment of $900,000 from MercyOne North Iowa Medical Center for the buildout of the clinic.

MercyOne has also committed $1.1 million for furnishings and equipment.

Tufte said the goal is to raise $5 million, though the coalition would ideally like to raise between $5.2 million and $5.4 million to provide a cushion if needed.

The coalition is also asking the city to consider approving a $300,000 loan for the coalition that would be forgiven when certain employee thresholds are reached.

Arends said ALEDA made its loan contingent on having a firm start date, and the coalition would be open to that criteria with the city as well. There have also been conversations about having some sort of collateral in place to receive the funds.

The coalition is waiting for the go-ahead for construction from MercyOne after the hospital system announced in March it had temporarily halted construction plans for the Albert Lea clinic because of the COVID-19 pandemic. Hospitals across the country were closed down for elective surgeries and many other procedures. At that time, the hospital system said it remained committed to resuming plans for construction and would share an update as soon as a new timeline is determined.

Arends said he is optimistic about the project and noted that MercyOne has hired two physicians and a clinic manager, of which one physician is already at work in Albert Lea at the Mason City Clinic location in Northbridge Mall.

At best right now, the coalition is hoping for a July 1, 2021, start date, assuming they are able to break ground in December. The bid process was completed before the pandemic, but because all of the bids had a 60-day expiration on them, the project will have to be re-bid.

Tufte said MercyOne and its architects also had to revise the layout of the clinic to incorporate COVID-19 precautions.

Arends said there will be two separate waiting rooms: one for healthy people coming in for doctor visits and a second for those who think they might have COVID-19. The number of telehealth rooms also doubled.

The plan is to initially open the clinic with over 14,000 square feet, including urgent care services, seven specialist physicians, six primary care professionals and telehealth services. Future phases of the project call for an expansion of services, depending on patient load. When complete, it will utilize 40,000 square feet of the mall space.

Who is Dale Larson?

After attending college for a few years after high school and then spending some time in the Army, Dale Larson said he began his career with the company and in 1964 expanded manufacturing to Brookings, South Dakota, and became president and CEO.

Larson said he was contacted about the planned clinic through a letter written by Al Arends, who has been active in the project effort. He also spoke with Arends’ son, Brad, the president of the Albert Lea Healthcare Coalition, about the project.

“We like to be philanthropic in the areas where our distribution points are, and this looked like a project with good support from the community,” he said.

Though he would like to see the new clinic when it is up and running, he said that will depend on the COVID-19 pandemic.

Minnesota saw a larger increase in new COVID-19 cases on Thursday, according to the daily update from local and state... read more