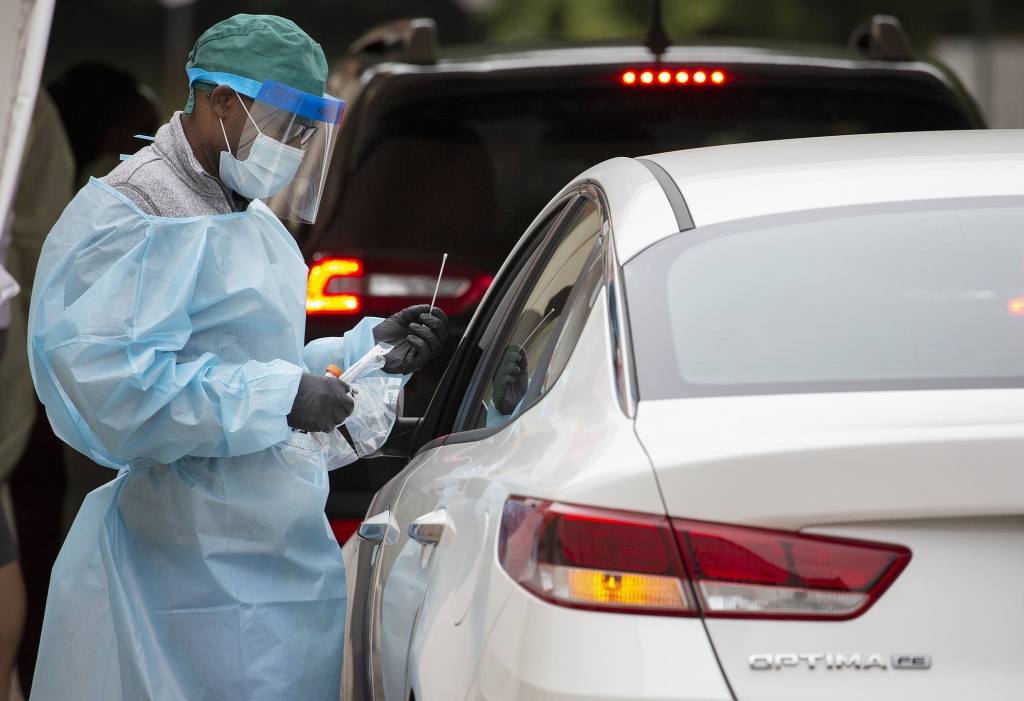 Finlay Marube, a medical lab scientist, administers a COVID-19 test Friday at the drive thru or walk up testing site at North Memorial Health Specialty Center in Robbinsdale. The site is open Mondays, Wednesdays and Fridays. Christine T. Nguyen/MPR News

Minnesota health officials reported a daily record for new COVID-19 cases on Saturday, with the 924 additional confirmed cases pushing the statewide total past 60,000.

That’s as the state saw eight more deaths from COVID-19, and the number of Minnesotans hospitalized with the disease remained at or above 300 for the ninth straight day.

The spike in cases in Saturday’s report from the Minnesota Department of Health was spread across all regions of the state. It accompanied a lesser increase in completed tests; the percentage of positive tests for the day climbed back about 5 percent.

Hospitalizations rose to 309 in Saturday’s report, up from 300 on Friday. About half of those patients were being treated in ICUs.

State health officials have said that positive tests reported on a given day usually are the result of transmission that happened two to three weeks previously.

Saturday marks two weeks since Minnesota’s mask mandate — requiring the wearing of face coverings in indoor public places — took effect. Given the lag time in detecting cases, state health officials have said it could take 21 days from the start of the mandate, to determine whether it is affecting the spread of the coronavirus in the state.

Meanwhile, officials in recent days have also warned that Minnesotans are backsliding in their efforts to stem COVID-19 as the disease ripples through communities, fed by people returning to public spaces.

That’s a constant worry now among the state’s public health experts, who’ve been stressing all week that hard-won gains over the disease are in danger. And they’ve made it clear that the massive motorcycle rally underway now in Sturgis, S.D., could make things worse.

“Nobody likes to tell people they shouldn’t go out and have fun and live their lives. But the hard truth is we are in a historic pandemic,” Minnesota Health Commissioner Jan Malcolm said Friday of the Black Hills rally.

“We have big problems in Minnesota, and in the United States, with community transmission — and the idea of bringing together tens and hundreds of thousands of people from all around the country in close contact for days at a time does raise significant concerns.”

Malcolm and other experts have urged Minnesotans going to Sturgis to self-isolate for 14 days after they get back home.

Here are the latest COVID-19 statistics:

While current hospitalizations remain far lower than their late-May peak, they’ve shown an upward swing the past few weeks even as the daily growth in new cases flattened.

Despite the relatively good numbers, officials on Friday raised fresh worries about long-term care facilities, the epicenter for most of Minnesota’s COVID-19 deaths.

In early May, Gov. Tim Walz unveiled a “battle plan” to safeguard Minnesotans living in long-term care facilities, including expanded testing and a promise of “adequate” staffing when workers fall ill. It helped drive down daily death counts to mostly single digits the past six weeks.

Now, though, officials worry those gains may slip away as COVID-19 ripples across the state.

They say they’re seeing new cases tied to long-term care facilities that they believe are being driven largely by community spread and brought in inadvertently by facility staff as restrictions on daily life loosen and people return to indoor gathering spaces and attend family events.

“The staff are clearly having more exposures in the community than in the facilities themselves,” said Dr. Ruth Lynfield, the state’s epidemiologist.

She urged people to stay vigilant against the spread of the disease — wearing masks in indoor gathering places, social distancing and washing hands — and warned that the work to limit spread among vulnerable populations was at risk.

“This is fragile and we are very concerned that the progress we have made can be at risk, and can even be lost, if we let up on our precautions,” she said. “We need everyone in Minnesota to be doing their part to limit transmission. We are all connected to each other.”

Cases bubble up across age brackets, up north

Worries remain about the growth of COVID-19 among younger Minnesotans, including that those infected will inadvertently spread the virus to grandparents and other more vulnerable people.

Minnesotans in their 20s now make up the age group with the most confirmed cases in the pandemic — more than 14,000. The median age of Minnesotans infected has been trending down in recent weeks and is now 36 years old.

Regionally, the Twin Cities and its suburbs have been driving the counts of newly reported cases. But the disease is present in all parts of the state, including the north, which had largely avoided the outbreak until recently.

Many of the state’s fastest-growing outbreaks relative to population are in northern Minnesota.

Meatpacking operations had been hot spots for big outbreaks in southwest, west-central and central Minnesota earlier in the pandemic, but new cases have slowed considerably in recent weeks.

Malcolm and other state public health leaders have warned all week that Sturgis, which runs through Aug. 16, could be a potential petri dish for spreading the virus here and across the nation.

The event is expected to attract more than 250,000 riders and their friends from around the country to the Black Hills.

Malcolm on Friday said self-isolating for 14 days after Sturgis was especially important for people who work with seniors or other populations highly vulnerable to COVID-19.

“Too many people have already gotten very sick and have unfortunately died of this disease in our state,” she said. “We don’t want to see any more.”

Freeborn County reported one new case on Saturday, increasing the county’s cumulative cases to 359. Of that number, there are six active cases, and one person is hospitalized.

The Freeborn County Public Health Department stated the new case was a person between 10 and 20.