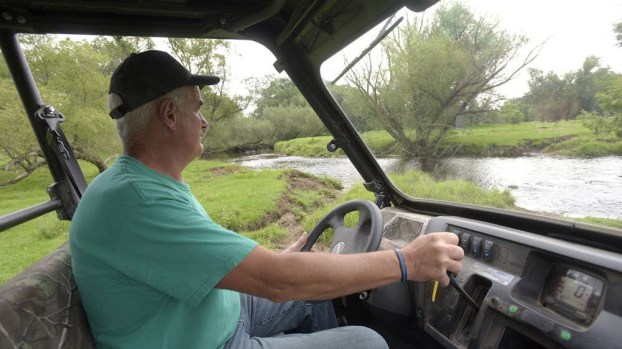 Farmers face new restrictions this week in parts of Minnesota on how they apply nitrogen fertilizer in an effort to reduce nitrate contamination in the state's groundwater. Photo courtesy Minnesota Public Radio News

Fertilizer rules to start this week, but will they curb Minn. groundwater’s nitrate problem?

Don Tschida grows corn, beans and small grain on land that his father and grandfather farmed before him. On his central Minnesota farm, he also raises a small herd of beef cattle and two barns of broiler chickens.

There’s been plenty of rain this summer, and the corn stands tall and green. But when Tschida digs down beneath a layer of topsoil, the earth is coarse and sandy.

“Water just really filters through in a hurry,” he said.

If Tschida isn’t careful, what he puts on his fields — including the nitrogen in fertilizer — could wind up in the groundwater below, where most Minnesotans, including Tschida, get their drinking water.

Starting this week, farmers in parts of Minnesota, including in Morrison County, will face new restrictions on how they apply nitrogen fertilizer.

The regulations are aimed at reducing nitrate contamination in the state’s groundwater. But whether they’ll have a real impact on a growing health and environmental problem is still up for debate.

In a testing program a few years ago, more than half of the wells tested in Agram Township, where Tschida farms, had a level of nitrate higher than what the federal government considers safe for drinking water.

Above that limit, nitrate poses a health risk to humans, especially infants. Consuming too much nitrate can cause a potentially serious or even fatal condition known as blue baby syndrome.

Nitrate contamination can come from different sources, including septic systems and urban drainage. But in Minnesota, the biggest source is the fertilizer and animal manure commonly applied to farm fields.

It took several years for the Minnesota Department of Agriculture to develop what’s known as the Groundwater Protection Rule, to tackle the problem. It took effect in June, and the restrictions that govern when farmers in specific areas can apply fertilizer begin Tuesday.

Starting this week, farmers won’t be allowed to apply nitrogen fertilizer in the fall or on frozen ground, in parts of Minnesota where the groundwater is vulnerable to contamination. The rule applies to about 12 percent of the state’s cropland, mainly in the central and southeastern parts of the state.

In those areas with coarse soil or karst bedrock, nitrogen applied in the fall is more likely to run off or leach into the groundwater before it can be used by crops planted in the spring.

But that first part of the rule may not have a major impact. Many farmers in those regions already avoid fertilizing in the fall, because it wastes costly fertilizer.

“Most farmers have already adopted that, in some cases as much as 20 and 30 years ago,” said Warren Formo, executive director of the Minnesota Agricultural Water Resource Center.

Morrison County’s Soil and Water Conservation District manager Shannon Wettstein doesn’t expect that restriction to change much for farmers in her region.

“Around here, folks understand if they’re going to apply in the fall, because of sandy soils, it drops out so quickly that that is lost revenue for them,” she said. “They’re not going to see that come back around in yield on their crops.”

The second part of the rule targets land surrounding city wells that already have elevated nitrate levels. It aims to get farmers in those areas to change their fertilizing practices to reduce the loss of nitrogen — voluntarily at first.

Local advisory groups made of farmers, agronomists and community members will meet to discuss local water conditions and decide on the best practices for their areas, Formo said.

“I think that just the having of that discussion will have an impact because farmers can learn more about groundwater and how it flows in their area,” he said. “Then they hopefully will be provided with information by the Department of Agriculture to start connecting that to their practices, and which practices are making the biggest difference.”

Too little, too late?

Farmers won’t face enforcement, including penalties, unless they refuse to adopt the changes or nitrate levels get worse, and not for at least three years. That’s led some clean water advocates to say the rule doesn’t go far enough or work fast enough.

“I think the three years to phase in the management practices is just three years where the water could be potentially getting worse,” said Carrie Jennings, research and policy director for the clean-water advocacy group Freshwater Society.

Jennings said the rule waits until groundwater is already polluted before requiring action. And she said the rule only restricts commercial fertilizer, not manure, which also contains a lot of nitrogen.

The rule also doesn’t address who pays to deal with nitrate contamination, such as when a homeowner or city has to install a treatment system for their drinking water, Jenning said.

“It creates the situation where the person who is being impacted by this pollution has to pay for the cleanup,” she said.

Clean water advocates say real change will only come if farmers in those vulnerable areas move away from planting corn and soybeans, which require a lot of tilling and fertilizing.

“There’s a point at which, you know, it’s not how you grow the crop. It’s the crop you grow,” said Trevor Russell, water program director for the nonprofit Friends of the Mississippi River.

“There are some places where you simply cannot grow traditional corn and soybean crops and not lose nitrate to the aquifer and put public health at risk.”

Russell advocates for developing markets for alternative crops such as Kernza, whose long roots hold the soil in place and help reduce the leaching of nitrogen.

Tschida said normally, he’d be the last person to say that farmers need another regulation. But he thinks the nitrogen fertilizer rule is probably needed to get more farmers to reduce their fertilizer use.

“I think as farmers, sometimes, I think we’re our own worst enemies,” he said. “We go so fast and try to do so much, and we ask so much of the land more than it was ever put here to produce.”

Tschida has made changes to how he cares for his fields since his grandfather owned the land. He hired a consultant who helps him determine exactly how much nitrogen fertilizer to apply, and when.

He’s decided to stop applying chicken manure to the fields because it’s more difficult to control the precise amount of nitrogen the crops receive. And he’s planted cover crops of radishes and oats to help hold the soil and nutrients in place.

Two years ago, Tschida nearly died when he was run over by a tractor he was trying to start. He spent months recovering from severe injuries, including all of his ribs on his left side.

“There’s no logical reason that I survived the actual accident,” he said. “And then, to pretty much 100 percent recover from all the broken bones and everything. It was just a miracle.”

The experience has made him appreciate life and his farm even more. Since then, Tschida said, it seems more important than ever to take care of this land — and the water that flows beneath it.

“I think we always did take good care of land here as good stewards, the third generation,” he said. “But the older I get, the more conscious I am of that.”