Increasing the birds in the area 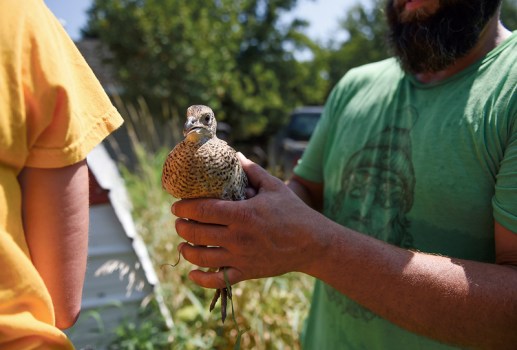 Danny Bergstrom holds one of the pheasants that were to be released Sunday. - Eric Johnson/Albert Lea Tribune 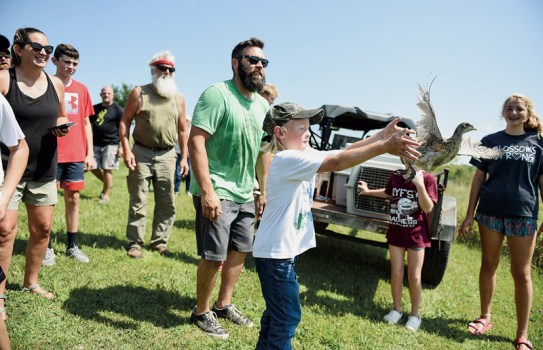 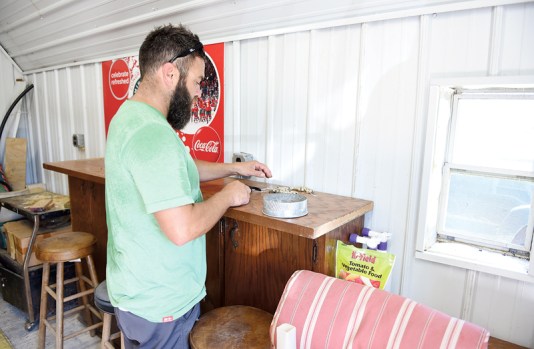 Danny Bergstrom sorts bands that were to be placed on pheasants they release. - Eric Johnson/Albert Lea Tribune 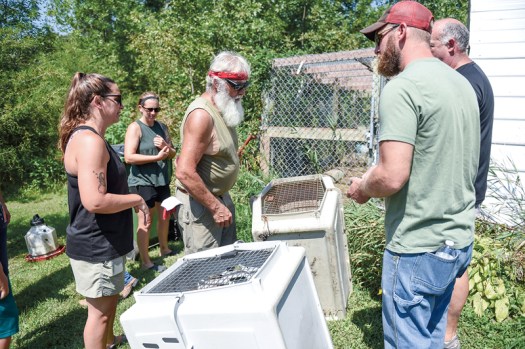 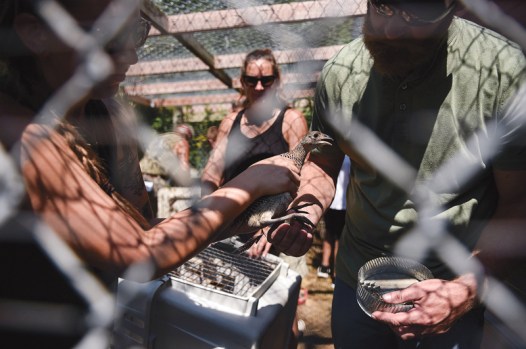 Logan Cambern leans in to put a band on the leg of a pheasant held by Abbey Bergstrom. - Eric Johnson/Albert Lea Tribune 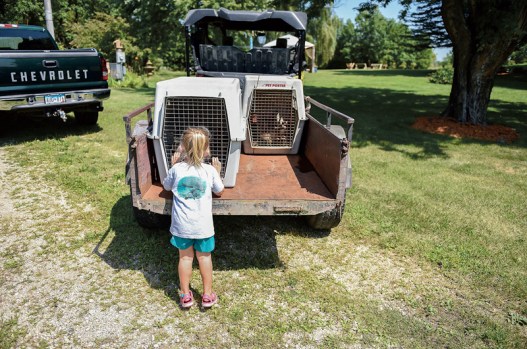 Willow Cambern looks in on the pheasants before they were released Sunday. - Eric Johnson/Albert Lea Tribune 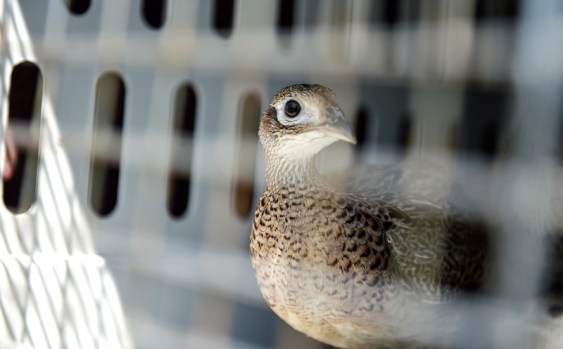 A pheasant looks out through a cage as it waits to be taken out and be released. - Eric Johnson/Albert Lea Tribune 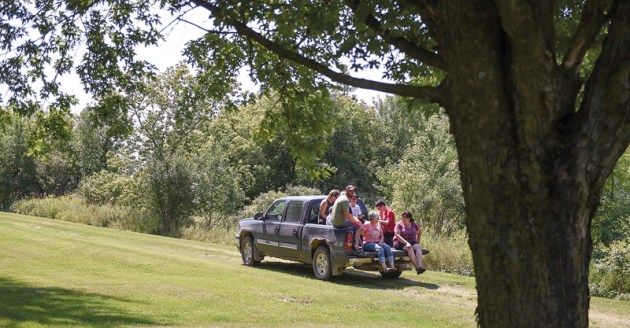 The releasers head out to the private hunk of land where the pheasants were set to be released. - Eric Johnson/Albert Lea Tribune

Together as a family, the Bergstrom and Weiserts released around 150 pheasants on private land this last Sunday. - Eric Johnson/Albert Lea Tribune 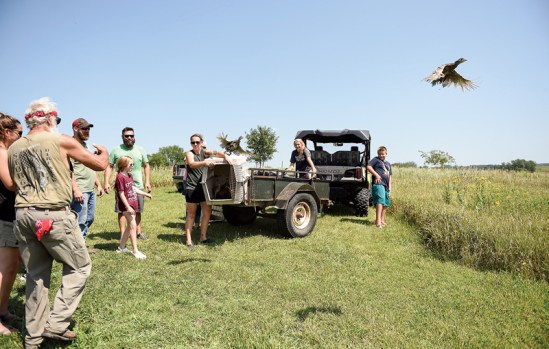 A pheasant takes flight as the releasers watch this past Sunday just west of Austin. - Eric Johnson/Albert Lea Tribune 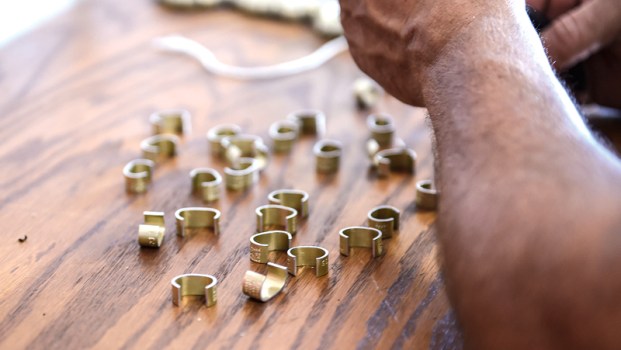 Each pheasant released received a band that allowed them to be tracked. - Eric Johnson/Albert Lea Tribune

On a sweltering Sunday afternoon, west of Austin, members from two different families gathered for an annual event on the farms of Danny Bergstrom and Bob Weisert.

The event was releasing around 150 adult pheasants to two different parts of land owned by Bergstrom and Weisert.

As members of the Freeborn Pheasant Habitat Club, the families are doing their part to help foster the numbers of pheasants in the area.

“We just want to get the birds out,” said Danny’s father RJ Bergstrom. “There’s some good habitat around here.”

At times the scene was chaotic as members entered the pheasant cage and began corralling the birds that jumped and flew about the coop. Once caught, they were banded and placed in pet carriers for a short ride to where they were to be released. Once there, family members took turns releasing the birds as they flew to their new homes.

The Bergstroms have been releasing pheasants since the late 70s, when the effort was spear-headed by RJ’s father. Weisert got involved around eight years ago, making use of the prime habitat in his own plot of land as well as the Bergstrom’s land.

“There’s just all kinds of cover, all kinds of feed,” Weisert said. “We have crop land all around with cover in the middle. There’s water with Turtle Creek, there’s water behind my place with a little pond. It’s just great cover. They can hide from predators well and get all the food and water they need.”

The birds come just a day old, usually in early to mid-June, but this year they came later because of weather and other factors.

The Freeborn County group as a whole also releases adult birds they purchase and plant trees in order to facilitate more habitat for the birds.

At its base, the effort is family centered, but it is also angled to increase the number of birds in the area. Both families have seen birds declining in the area.

“We like to raise pheasants to add more to the population, to see more around,” Danny said. “It’s a family deal.”

“I’ve been a longtime pheasant hunter and deer hunter,” Weisert added. “The population was declining so bad. We’re just doing what we can to make it better and increase the population.”

The promise of what the families do in releasing the birds is that they can increase the numbers in their corner of the world.

“The area we have where we release birds and stuff, it’s our property so nobody hunts it,” RJ said. “It doesn’t get a lot of pressure.”

As the family reached the first spot and children and grandchildren began releasing the pheasants, it was clear how important it was  to go through the act together.

“Everybody is pretty close here and Bob’s like family,” Danny said.

All members of the family talk about how important the past was as well and the bond it has formed. Afterwards, they told stories of how numerous the birds once were and how not long after they would release the birds, a hunter would then make their way back to them.

“And they walk the bands up to us and ask, ‘do you know where we turn these in?’” said Danny’s sister Jessica Carlson.

There’s a generational aspect to all of this. By letting the kids take an active role in the process, it’s a chance to learn something about the world around them.

“It’s a good way to get the kids involved so they know kind of what hard work is,” said Abbey Bergstrom, another of Danny’s sisters. “They understand where (the pheasants) come from and why we do what we do so the next generation can take care of it.”