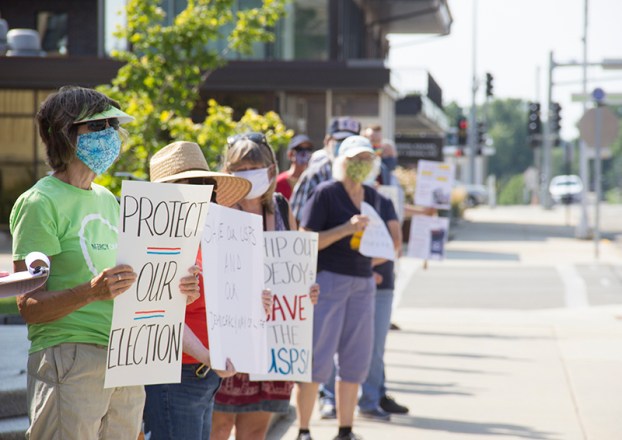 Residents stand outside the Albert Lea post office on Saturday to show their support to the U.S. Postal Service. Sarah Stultz/Albert Lea Tribune

A group of area residents gathered Saturday morning outside the Albert Lea post office to express support for the services provided by the United States Postal Service and to call for the resignation of Postmaster General Louis DeJoy.

The effort was part of a nationwide mobilization taking place Saturday at 1,000 post offices across the country.

Jennifer Vogt-Erickson, who organized the local event, said protecting the post office is a bipartisan effort, and she called on Congress to shore up the Postal Service, calling it one of the oldest and most trusted institutions in the country’s history.

The U.S. House of Representatives on Saturday voted 257-150 on a bill to provide $25 billion to the Postal Service and to block operational changes by DeJoy, but the White House dismissed the bill late Saturday, stressing that President Donald Trump would only consider additional money as part of a broader coronavirus relief package. 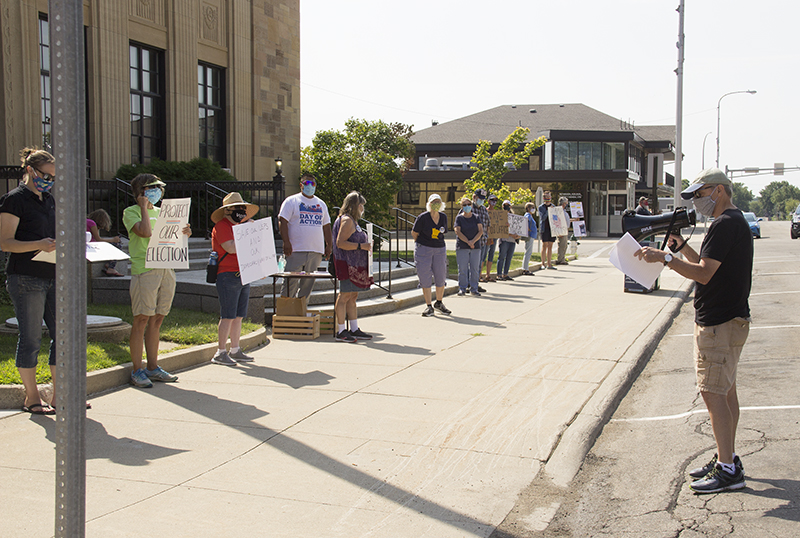 Ted Hinnenkamp, right, speaks Saturday about the lawsuit Minnesota Attorney General Keith Ellison is a part of to stop the operation changes to the Postal Service. Sarah Stultz/Albert Lea Tribune

The Postal Service has been struggling financially under a decline in mail volume, COVID-19-related costs and a rare and cumbersome congressional requirement to fund in advance its retiree health care benefits.

The House Oversight Committee on Saturday released internal Postal Service documents warning about steep declines and delays in a range of mail services since early July, shortly after DeJoy took the helm. DeJoy acknowledged at a Senate hearing there has been a “dip” in service, but disputed reports of widespread problems.

Albert Lea resident Ted Hinnenkamp, whose grandfather worked for the postal service for 50 years, talked about the lawsuit Minnesota Attorney General Keith Ellison joined with several other states to stop the operational changes to the Postal Service that could have an effect on mail-in voting in the general election.

Hinnenkamp said the lawsuit talks about how the changes to the Postal Service would undermine its ability to provide vital services, including delivery of prescription medications and Social Security payments.

Albert Lea resident Annie Mattson said she and Paul Stieler are small-time beekeepers, who often get their bees through the post office. Bees arriving a few hours late can have catastrophic effects.

DFL District 27A candidate Thomas Martinez talked about the history of the Albert Lea post office and said it was built in 1937 as part of the New Deal.

He said when the post office is attacked, that essentially attacks veterans, rural America and democracy itself.

Vogt-Erickson said people must stand up for the Postal Service, noting rural areas depend on it the most. Rural free delivery was established in 1896, and postal workers now deliver to 42 million rural mailboxes daily. 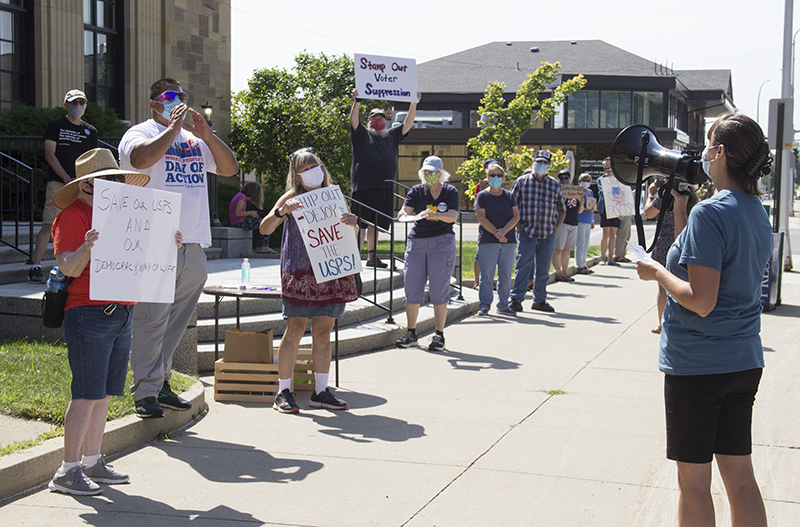 A statement provided by District 27A Rep. Peggy Bennett called the U.S. postal system an integral part of the country since it was established by the Second Continental Congress in 1775. She said there were over 2.5 billion pieces of first class mail handed through the post office during the week of Dec. 16 last year.

“I have every confidence that this great and essential U.S. institution will continue to operate for many years to come, and that Congress and our president will continue to look for ways to keep this vital public service solvent and help it adapt to our 21st century needs,” Bennett said.

A statement from Dan Feehan, DFL candidate for 1st District U.S. House, said he was concerned with the weakening of the Postal Service but thinks it is a “fixable problem.”

He said if he is elected to Congress, he would fight against privatizing the Postal Service.

Vogt-Erickson said she reached out to all current and prospective legislators for comment about the issue but did not hear back from state Sen. Dan Sparks, his challenger Gene Dornink, U.S. House Rep. Jim Hagedorn, U.S. Sen. Tina Smith or her challenger Jason Lewis.

Two new COVID-19 cases were reported in Freeborn County on Sunday, according to daily updates from local and state health... read more