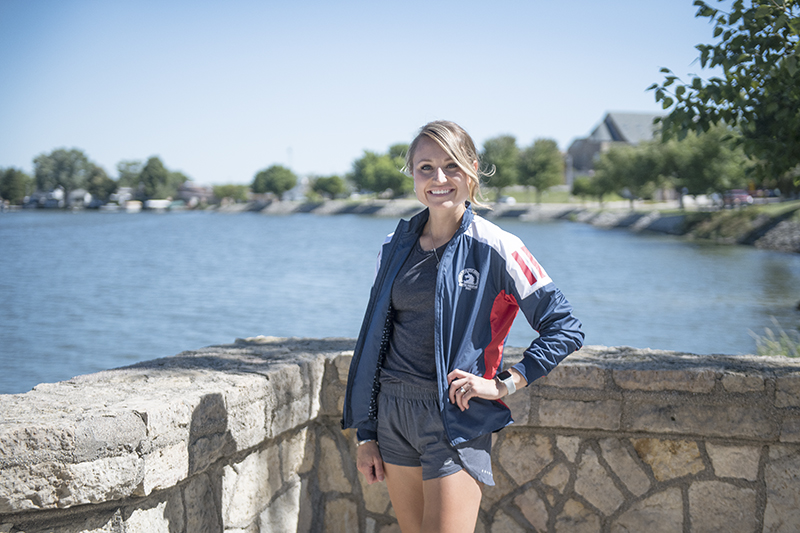 Kaitlin Goforth will run the Boston Marathon virtually on Monday. In her training for the marathon, Goforth said her favorite routes usually revolve around Edgewater Park and Fountain Lake. - Colleen Harrison/Albert Lea Tribune

Albert Lean Kaitlin Goforth started running when she was in seventh grade.

Influenced by her mother who was also a runner, she ran cross country in high school and college, in addition to indoor and outdoor track in college, and has run several other races over the years.

She will lace up her running shoes again on Monday as she participates in what may be her biggest race yet — the Boston Marathon — after qualifying for the race last May.

Because of COVID-19, however, the race will not be what she initially anticipated. Instead of traveling to Boston, she and about 18,000 other qualifying runners from 110 countries will compete virtually and then submit their times through an app specially created for the marathon. She plans to run the race in her hometown of Worthington.

“I’m sad to be missing the Boston experience because that’s what it’s about, getting out there and running with the elite runners …,” Goforth said. “But it will be cool to run it in Worthington — where I grew up, where I enjoy running and learned to love running.”

Goforth, a physician assistant in the orthopedic department at Mayo Clinic Health System in Albert Lea and a volunteer coach for Albert Lea’s cross country team, said she ran her first marathon in Sioux Falls, South Dakota, in 2014.

Though disappointed, she decided to take a few weeks off and then train for another race.

In May 2019, she ran the Lincoln Marathon, and qualified with a time of 3 hours and 25 minutes.

“I was super excited,” she said. “All my friends and family were there. It was a great time.”

In November 2019, she began training for the Boston Marathon with hopes of running it April 20, but then the pandemic struck.

In mid-March, she said the marathon was postponed, so she took a step back off her training and then started training again at the end of April. At the end of July, organizers opted to make the race a virtual event.

On race day, she said she will start her run at her family’s driveway in Worthington, run around the lake there four times and then finish up at the park there in town, where her family and others will be cheering her on.

Once the 26.2 miles are completed, she will submit her time to the Boston Athletic Association, and she will receive a finisher’s medal and certificate in the mail.

She starts her days out early to get her run in before work. She has run a long run — between 10 and 20 miles — once a week and then otherwise runs five to 10 miles a day. She runs six days a week, typically totaling between 40 and 55 miles per week.

She also enjoys the process of feeling more in-shape as the weeks go on before a race.

Her qualifying time from 2019 qualifies her to run the race in both 2020 and 2021, so she hopes to get to Boston next summer or in the next few years.

In the future she hopes to complete other marathons Chicago, New York and Duluth, among others.

“Many people will say I don’t know what a runner’s high is, but I would say I’m addicted to it,” she said.