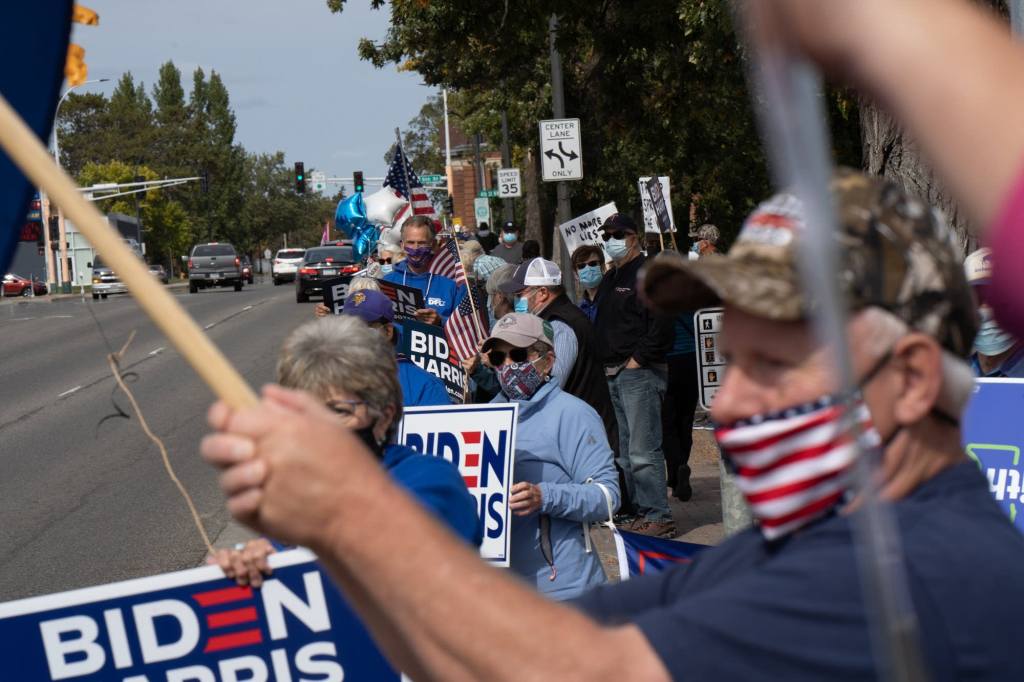 Jerry Hempstad, right, waves a flag in support of the president as supporters of Vice President Joe Biden line the street behind him in Bemidji on Friday. Evan Frost/MPR News

On the same day that early voting begins in Minnesota, President Donald Trump and Democratic presidential nominee Joe Biden made campaign swings through the state.

Trump held an airport hangar rally in Bemidji at 6 p.m. Biden, who is leading in most Minnesota polls, arrived in Duluth earlier in the day, choosing a low-key appearance at a nearby carpenters union hall rather than a rev-them-up rally.

Upon arriving around 6 p.m. at the regional airport in Bemidji, Trump began his speech with the topic of refugees and immigration.

“I’m the difference and I’m the wall,” Trump said after railing against refugees and bragging about the latest deportations of Somali nationals. “I’m the wall between the American dream and chaos.”

He predicted victory in Minnesota in November despite the state’s long history of backing Democratic candidates.

“I just saw a poll here I’m down nine. I don’t think so,” Trump said to chants of “We love Trump” from the crowd.

News broke that Supreme Court Justice Ruth Bader Ginsburg died from complications of pancreatic cancer at age 87. Trump told reporters after the rally as he headed back to Air Force One that he didn’t know Ginsburg had died. The president called her “an amazing woman” who led an “amazing life.”

Roughly 3,000 people made up the crowd inside the event, with about the same amount outside, watching on a big screen.

Mike Rasch, a Trump supporter and volunteer Christian Radio DJ from Bemidji, said he doesn’t believe Biden is winning in Minnesota. “Look at all these people,” he said, motioning to the thousands of locals and travelers packed together on the tarmac.

He added that he worries about the unrest that might follow the election. Bemidji is a divided area. Protesters assembled in town, well past the airport’s security perimeter.

As Trump supporters gathered for the speech, the city was packed with jacked up pick-up trucks flying Trump banners, American flags and “Don’t Tread on Me” flags.

The flag, sign and hat shop is doing killer business. Brian Vazques, 22, came from California three weeks ago to run the sign store out of a defunct car dealership on the main drag. He said he expects the shop will make at least $10,000 in one day.

“I honestly can’t tell you the difference between a Republican and a Democrat,” he said. “I’m a capitalist, and this capitalism at its finest.”

A group of local tribe members gathered at the edge of the Target parking lot in protest of the president’s visit.

Bob Shimek, an enrolled Red Lake member who lives on White Earth helped set up, skinning a tree branch with a pocket knife to serve as a flag poll for the Red Lake Nation flag.

“Bemidji is at the center of three Indian reservations. Red Lake, Leech Lake, and White Earth,” he said, drawing a map in the air with the tip of his pocket knife. “And right in the middle is what I call the armpit of racism in northern Minnesota.”

The Trump rally has brought out the area’s true colors, he said.

Trump has kept a close eye on issues of particular importance to rural corners of the state, reversing an Obama administration policy prohibiting the development of copper-nickel mining and bailing out soybean, corn and other farmers who have been hurt by trade clashes with China.

More recently, he’s embraced a “law and order” message aimed at white suburban and rural voters who may be concerned by protests that have sometimes become violent. That’s especially true in Minnesota, where the May killing of George Floyd by a police officer sparked a national reckoning on systemic racism.

But for all the work Trump has put into the state, it may elude him again in November.

A series of polls over the past week show Biden has built a consistent lead over Trump. And in the 2018 midterms, Democratic turnout surged in suburbs, small cities and even on the Iron Range, across the blue-collar mining towns that were once labor strongholds but had been trending Republican.

Trump’s path to Minnesota success likely depends on finding more votes in rural, conservative areas — running up the score beyond his 2016 tally. It’s a strategy he’s trying to pull off elsewhere and it depends on a robust field operation with the money and time to track down infrequent or first-time voters. That could be a tall order since Minnesota already has one of the nation’s highest voter turnout rates.

Still, Trump has spent more than a year building a sizable Minnesota ground game. Republicans are out knocking on doors and interacting personally with voters in ways that Democrats mostly have not, preferring online operations because of the coronavirus.

The president’s reelection campaign announced this week a $10 million ad buy in a series of states, including Minnesota. It has spent nearly $17 million on advertising in the state since last October, compared with almost $6.3 million for Biden over the same period, according to a review of Kantar/CMAG data by The Associated Press.

Biden focuses on workers in Duluth

Speaking to some 50 people on the shop floor, Biden made his economic case to be president as he applauded labor union efforts to build up the trades, even as many have been idled during the pandemic.

He contrasted it with billionaires in America, whom he said continued to prosper. Biden said it begged a question for working-class Americans: “Who is looking out for me? That’s been the entire story of the Donald Trump presidency.”

Biden cited his hometown in Pennsylvania, comparing it to where the incumbent made his name. “I view this campaign as between Scranton and Park Avenue. All Trump sees from Park Avenue is Wall Street.”

Biden ran through his “Build Back Better” plan that’s heavy on spending on infrastructure. He said goals of retrofitting buildings and weatherizing homes to make them more energy efficient would help the environment and support millions of skilled laborers. He said he would invest trillions of dollars in ports, roadways, broadband access, schools and other public assets.

The former vice president spoke for about 30 minutes, ending with a nod to Minnesota’s kickoff to voting. “Time to take the country back folks. And it’s going to start here, today with voting in Minnesota “

This is Biden’s first appearance in Minnesota this campaign cycle, although his wife, Jill, toured a Prior Lake elementary school last week. Biden last visited Duluth in 2016, when he campaigned on behalf of former northern Minnesota U.S. Rep. Rick Nolan.

This visit returns him to a former party stronghold that has been undergoing a political shift. Since the former vice president last ran for office in 2012, the region has trended Republican in federal races. Trump won Minnesota’s 8th Congressional District easily while losing Minnesota narrowly four years ago.

“Things have changed in northeastern Minnesota, something I never thought would happen,” said Gary Doty, the former Democratic mayor of Duluth who now backs Trump, along with several sitting Iron Range mayors.

Government regulations and the pace of new mining project approval loom large in the area.

Since narrowly losing Minnesota in 2016, Trump has focused relentlessly on the state in hopes that a victory this year could offset losses in other states. Trump held a similar airport rally in Mankato in August. Vice President Mike Pence and Trump’s children Ivanka Trump and Donald Trump Jr. have all visited Duluth in the past two months.

Democrats warn that Biden still may have his work cut out for him.

Duluth Mayor Emily Larson said the Trump campaign has far outpaced Biden in local yard signs — which indicates enthusiasm but may not ultimately affect the outcome.

“One of the things the Trump campaign has been very good about is visibility in Duluth, but also in areas around Duluth,” Larson said.