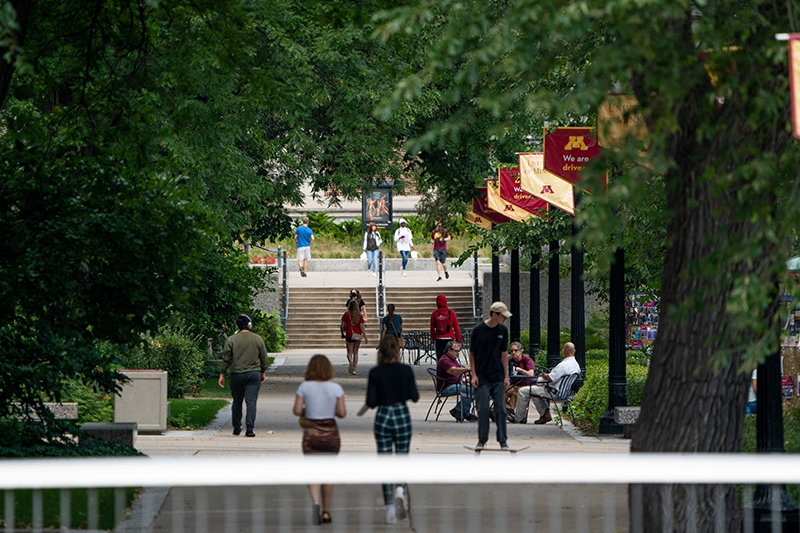 People walk through an outdoor common area on the University of Minnesota campus in Minneapolis on Aug. 3. Evan Frost/MPR News file

With newly confirmed COVID-19 cases rising steeply the past few weeks and college students and kids returning to school, state health officials have been particularly concerned about young adults as spreaders.

People in their 20s make up the age bracket with the state’s largest number of confirmed cases — more than 19,000 since the pandemic began, including nearly 11,000 among people ages 20-24.

They are driving the current outbreaks, although the number of high school-age children confirmed with the disease has also grown recently, topping 7,400 total cases for children 15 to 19 years old since the pandemic began.

The reality of those worries came into focus Tuesday as Winona State University announced an immediate 14-day campus quarantine that will limit all nonessential activities on campus for the next two weeks to slow the spread of COVID-19.

While less likely to feel the worst effects of the disease, experts worry youth and young adults will spread it to grandparents and other vulnerable populations and that such outbreaks could cripple attempts to reopen campuses completely to in-person teaching.

“We’re certainly aware of a lot of activity that is centered around our colleges and universities,” Kris Ehresmann, the state’s infectious disease director, said Tuesday, noting that there were more than 200 cases tied to Winona State students.

About one-third of new cases in Minnesota are now coming from community spread of unknown origin — higher than just before the Fourth of July, the last major holiday that brought Minnesotans together.

Most of the cases around colleges are tied to activities and gatherings outside of the classroom, Ehresmann said. “It’s a situation where it’s really going to be up to the students as to whether or not we’re going to continue to see transmission.”