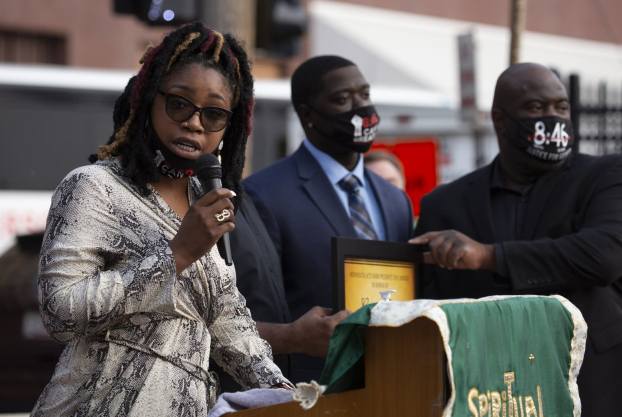 The family of George Floyd celebrated his life Sunday in Minneapolis as they launched the George Floyd Memorial Foundation.

“The overall goal of the foundation is to continue his legacy, things that he loved to do (for) the community,” said Bridgett Floyd, George Floyd’s sister and president of the foundation. “Trying to get people their license, police reform, things of that nature.”

A statement announcing the foundation stated that it “strives to promote social change from the inside out, bridge the gap between the community and law enforcement, initiate sustainable police reform and reverse racism while fighting for justice.”

Before his death at the hands of Minneapolis police in May, George Floyd had spent time working for the Salvation Army Harbor Light Center in Minneapolis. During Sunday’s foundation launch outside the center, the Floyd family announced its first donation would be to that nonprofit.

“For the foundation to contribute to the mission of the Salvation Army in George’s name is almost like they’re perpetuating what he was doing when he was trying to make a difference working with the Salvation Army,” Floyd family attorney Ben Crump said ahead of Sunday’s gathering.

The foundation launch took place alongside an event to help people experiencing homelessness — an effort that George Floyd took part in each year.

Sunday’s event included family members of two other men killed by police in the Twin Cities — Philando Castile and Jamar Clark — as well as nonprofit leaders and elected officials.

More than 100 people rallied outside the Minnesota Capitol in St. Paul on Saturday in support of President Trump, and... read more