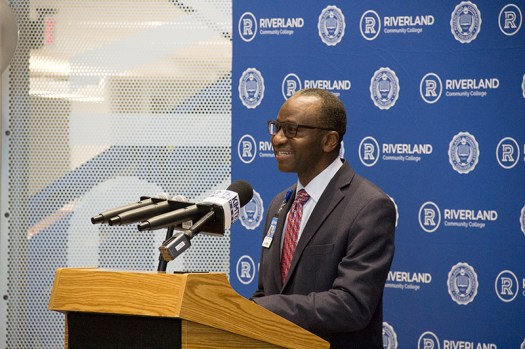 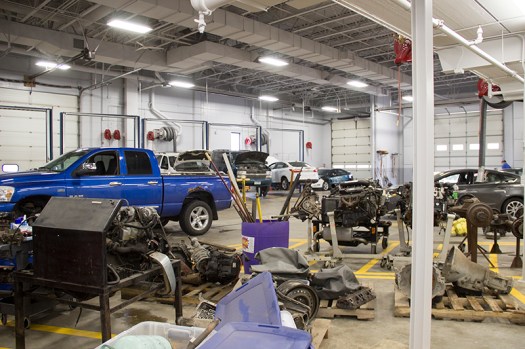 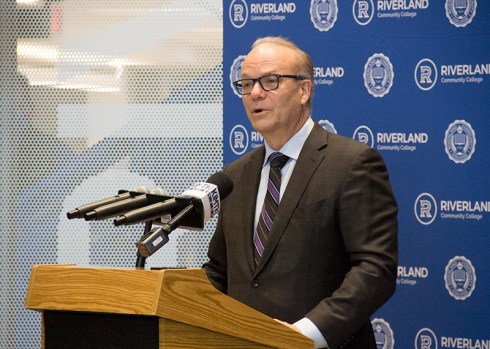 Jay Cowles, chairman of the Minnesota State Board of Trustees, speaks during the ceremony at Riverland Community College Friday celebrating the completion of the new Transportation, Trade and Industrial Center in Albert Lea. - Sarah Stultz/Albert Lea Tribune 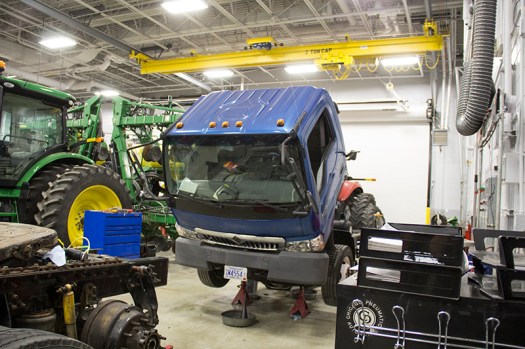 Updates to the diesel technology area included large doors to allow access for larger machinery and a new crane. The space now allowed the college to add the element of agriculture mechanics to its offerings, which opens up more employment opportunities. - Sarah Stultz/Albert Lea Tribune 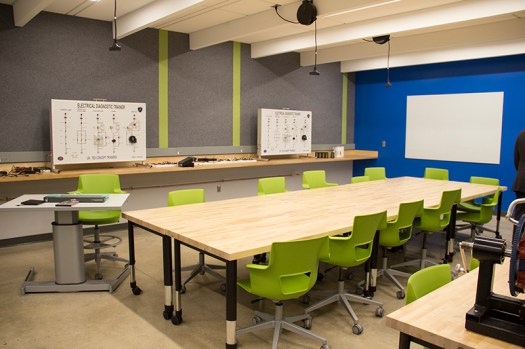 The college has new classrooms for the diesel and automotive technology programs. - Sarah Stultz/Albert Lea Tribune 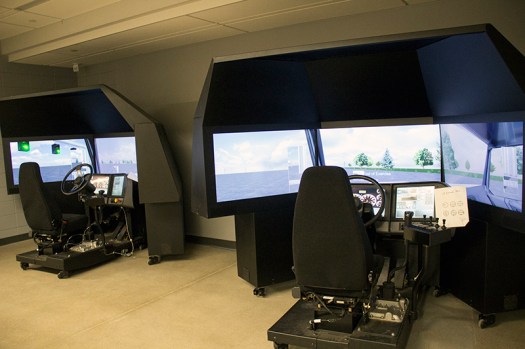 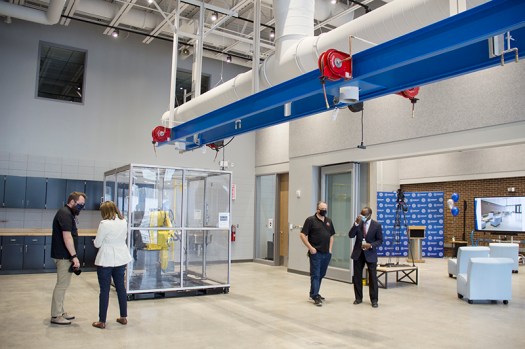 ‘We have so much to celebrate’

Riverland Community College celebrated the completion of its new Transportation, Trade and Industrial Center Friday at the Albert Lea campus with a group of area legislators, state education and college officials, students and others.

“This is a great day for Riverland Community College, for the Albert Lea community and the region,” said Jay Cowles, chairman of the Minnesota State Board of Trustees.

The $10.1 million project brought the transportation career fields offered through the college under one roof, added and modernized classrooms and lab spaces, demolished an obsolete building, incorporated a truck driving range, addressed deferred maintenance and relocated the truck driving program, among other changes.

Riverland Community College President Adenuga Atewologun said it was hard to believe that only about a year ago the college broke ground on the project. Much of the construction took place when the state was shut down due to COVID-19, and when the college reopened for students in the fall, most of the project was complete except for a few finishing touches.

Cowles thanked contractor Knutson Construction, who completed the construction in less than a year while the building was occupied and in the midst of a pandemic.

“The center is a stellar example of the innovation and state of the art teaching and learning spaces that will enable our students and talented faculty to meet the growing demands for skilled technicians and operators well into the future,” he said.

He noted the Albert Lea campus and its transportation programs align perfectly to support the movement of goods and materials throughout southern Minnesota and the Midwest and said that the transportation and technology careers served by the college are among the fastest growing in the region.

Atewologun briefly thanked the groups involved in the project, including the Riverland faculty and staff, staff through Minnesota State and legislators, who helped the college receive the bonding dollars that made the project possible. He said the project has been several years in the making.

District 27B Rep. Jeanne Poppe, DFL-Austin, reading prepared marks from District 27 Sen. Dan Sparks, who is recovering from COVID-19, said the facility will be an asset not only for the college, but also for the community and the region, and will create a strong return on the investment.

District 27A Rep. Peggy Bennett, R-Albert Lea, said she remembered walking through the college with the bonding committee before the project was awarded state funding, and then compared that to what the space looked like now that it was completed.

“I never ever pictured this,” Bennett said. “This is beautiful. What an amazing thing.”

She said she was excited about the project and talked about the importance of the skills that are being taught at the college.

“It’s a warm spot and celebration spot for our area, for Albert Lea and surrounding areas and all the businesses that are going to reap employees — good jobs — from this,” Bennett said.

Atewologun said he hoped to have a broader open house once the pandemic ends.

“Today I am very proud, frankly, of Riverland Community College,” Atewologun said. “We have much to celebrate today.”