Albert Lea shut out by Austin in home opener 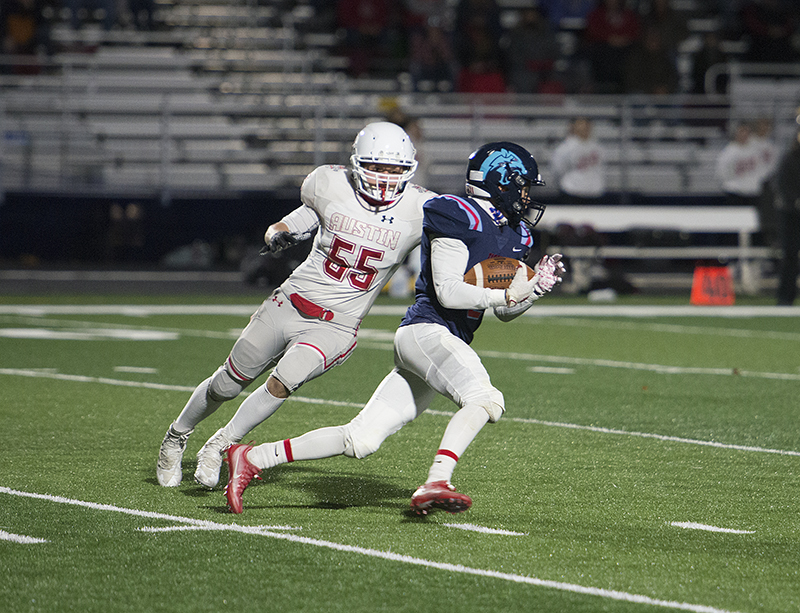 Albert Lea junior Cam Davis eludes an Austin tackler Friday night at home. Davis had a nice return late in the first half, but time ran out before the Tigers could capitalize. - Tyler Julson/Albert Lea Tribune

Offensively, the Tigers struggled to move the ball for much of the first half, which allowed the Packers to jump out to an early lead. The Tigers woes continued in the second half, as the Packers piled onto their already large lead. The Packers stood victorious in the end, 47-0.

The Tigers started out with a strong showing defensively, forcing the Packers into a three-and-out in their first drive.

The Packers put their first points on the board on the ensuing punt return, taking the ball roughly half way down the field for the score. The Tigers fumbled the ball on their next possession, giving the Packers the ball just 20-yards away from the endzone. 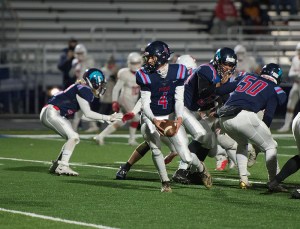 Quarterback Cody Yokiel takes the snap and tosses the ball to a running back Friday night at home against Austin. – Tyler Julson/Albert Lea Tribune

Austin capitalized on the good field position two plays later by taking in a seven-yard rush to make the score 13-0 after a failed fake PAT attempt.

The two teams traded punts back-and-forth through he next couple of possessions before the Packers connected on a 28-yard yard strike in the opening minutes of the second quarter.

The Tigers found some good fortune on defense two drive later when they recovered a fumble. However, the offense was unable to get any momentum, stalling and punting the ball back to the Packers.

Austin nearly fumbled again on its next possession, but fell back on the ball before a Tiger could gain control. The Packers scored just plays later on a six-yard pass to take a 27-0 lead.

The Tigers got a nice return from junior Cam Davis on the ensuing return and a pass from senior Cody Yokiel to fellow senior Caleb Talamantes put them in good position. However, the clock was not in favor of the Tigers as a forced throw to the endzone at the end of the half was intercepted.

The Packers went to the halftime break with a 27-0 lead.

The Tigers came out in the second half and picked up a first down on their first possession, but were soon forced to punt the ball away once again.

Austin score twice more in the third quarter, once on a 33-yard pass and another on a pick-six halfback pass play ran by the Tigers.

Albert Lea got a nice run from senior Griffin Studier that gave them a small shot of momentum, but the drive stalled out and the Tigers turned it over on downs.

The Packers scored one more time in the game and a successful PAT  made the score 47-0 as the game ended.

The Tigers fall to 0-2 on the season and will play Friday in Winona against the Winhawks.