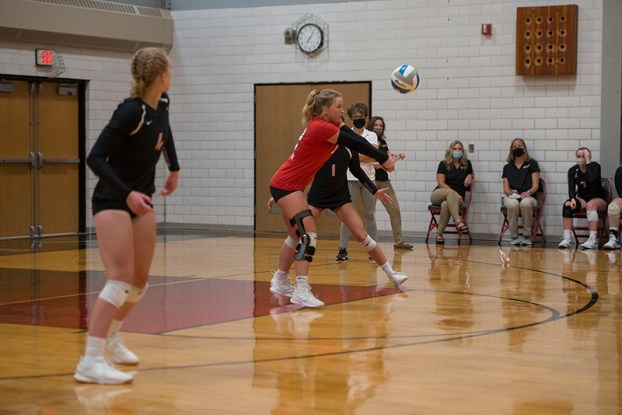 Junior Mallory Ignaszewski made her return to the team this season after taking last season off to rehab an ACL surgery. Tyler Julson/Albert Lea Tribune

Knights off to a hot 2-0 start

ALDEN — The Alden-Conger volleyball team kicked off its season Monday night in a match against the defending Valley Conference champions, Cleveland, and followed up with a home match against Loyola Catholic Tuesday.

After finishing as runner-ups in last season’s conference standings, the Knights were out for redemption against the Clippers. While all the sets were relatively close, the Knights got their revenge and defeated the Clippers in four sets 25-21, 22-25, 25-21, 25-14.

In the match, senior Abbie Theusch led the way with 20 kills, while also totaling 11 digs and two aces.

After a year off to rehab from an ACL surgery, junior Mallory Ignaszewski looked to be all healed with 19 digs and three ace serves.

Senior Mady Stein led the Knights in assists with 38. Senior Kylie Korman had 12 kills and seven digs. Grace Erickson totaled five kills and four digs and Emma Morrison was 100% from the service line and had eight digs. 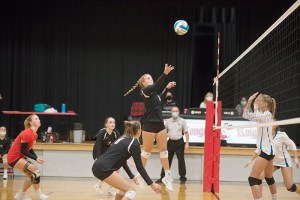 Senior Grace Erickson prepares to tap the ball over the net Tuesday night against Loyola Catholic. Erickson had eight ace serves in the match, six of which came during a 15-0 run in the second set. Tyler Julson/Albert Lea Tribune

The Knights followed up their statement win with a decimation of the Crusaders Tuesday night, winning in straight sets 25-9, 25-5, 25-11.

From the start, the Knights played top-level volleyball and never let up. In the first set alone Theusch and Korman each recorded seven kills. The power and height the Knights get at the net will not be rivaled by many teams this season.

After an easy first-set win, Alden-Conger followed it up with an even bigger performance. The Knights jumped out to a quick 3-1 lead and proceeded to go on a 15-0 run, thanks in large part to the serving of Erickson, who recorded six aces in the run. Thescuh also picked up another six kills in the set to bring her total to 13.

The Knights gave up a few more points in the set, but ultimately won 25-5.

The third and final set was the most competitive it got between the two teams. However, it was still controlled by the Knights, who cruised to a 25-11 victory.

Theusch led the Knights in kills for the second-consecutive night with 14. Korman was right behind with 13 after adding five more in the third set. Erickson recorded eight aces and two kills. Stein had seven kills and one ace serve. Senior Shay Sailor and junior Samantha Armstrong combined for three kills.

“Everyone on  the team got to play in the match,” head coach Jolene Bute said of the first game against Cleveland. “No matter is each student athlete plays a lot of rotations or not many, they all played a vital role in the opening win and after many, many days of practice without a match it was so much fun.”

The Knights start their season 2-0 and will play their next match Tuesday when they hit the road for the first time this season against the Cyclones of St. Clair

The Albert Lea volleyball team hosted its first match with fans allowed to be in attendance Monday night when Rochester... read more