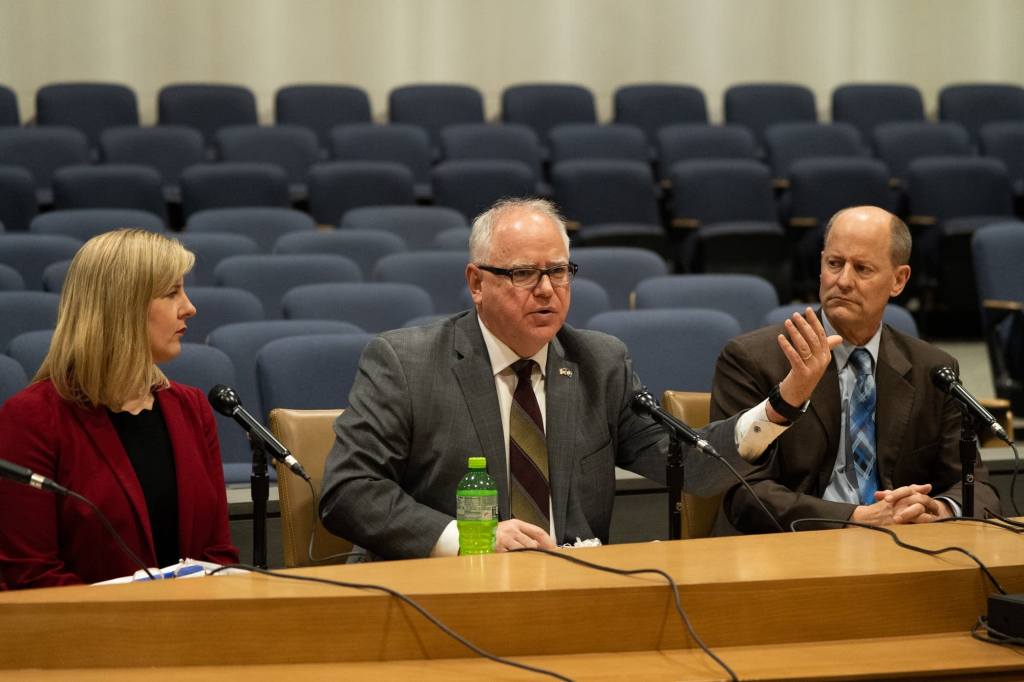 Gov. Tim Walz answers a question as Senate Majority Leader Paul Gazelka (right) and House Speaker Melissa Hortman (left) listen during a legislative preview panel inside of the Minnesota Senate Building in St. Paul on Feb. 5. Control of both the Minnesota House and Senate is at stake this year — with all 201 legislative seats on the ballot. Evan Frost/MPR News file

Minnesota legislative candidates are making a final campaign push in an election that will determine whether a divided government continues in the state.

“We are running a strong campaign, and people are just excited and energized,” said Senate Minority Leader Susan Kent, DFL-Woodbury.

Democrats are trying to flip the Senate and retain the House, which if successful would give Gov. Tim Walz single-party control for at least the rest of his current term. But Republicans say a balanced approach is a better way to govern.

Republicans control the Minnesota Senate by a margin of 35-32, which means Democrats would have to hold onto the seats they have and flip at least two seats to take control. All 67 Senate seats are on the ballot this year. But the fight for the majority is being fought in just a handful of competitive districts, mainly in the suburbs.

They also made a Lakeville-area district that they lost four years ago a top priority. Incumbent DFL Sen. Matt Little is defending his seat against Republican Zach Duckworth in this year’s election.

“My prediction is that we will keep the majority in the Senate, and it looks promising that we will actually grow seats,” Gazelka said.

Throughout the campaign, Republicans have been pressing a law and order message. They say Walz and other DFLers fell short in the response to the rioting that followed the killing of George Floyd.

They also propose a different approach to COVID-19 that Gazelka said would allow businesses, churches and schools in the state to fully reopen.

“COVID is serious. I think it will be around for a little while. But we have to be able to get Minnesota back on track,” he said.

Senate Democrats say they too want Minnesota to reopen, but they stress that it must be done safely.

Kent, who is in a competitive contest with Republican Mary Giuliani Stephens for her Woodbury seat, said she’s optimistic about flipping the Senate. She said Democrats have a positive message that contrasts with what she calls the scare tactics of Republicans.

“What we’re trying to do is really listen to voters and understand their real concerns, the things that are really affecting them and their families and provide solutions,” Kent said.

Minnesota had a big shift two years ago when the state House flipped. The DFL won control from Republicans and now has a 16-seat advantage, 75-59.

“If that means we’re doing more phone calls than conversations at the doors, and that’s what we have to do to keep Minnesotans safe and healthy, that’s what we’re going to do,” Hortman said.

In addition to the state’s COVID-19 response, lawmakers will be dealing next year with the resulting economic fallout from the pandemic. The state is facing a projected $4.7 billion revenue shortfall in the upcoming two-year budget cycle.

“When we talk to voters, we hear about bread-and-butter issues,” she said. “They want affordable, accessible health care. They want great schools, and they want economic security for their families.”

When lawmakers confront the red ink next year, House Minority Leader Kurt Daudt, R-Zimmerman, said the emphasis should be on spending cuts. Daudt believes an all-DFL legislature will try to pass a big tax increase.

Another task awaiting legislators next year is redistricting. Despite the constitutional responsibility for lawmakers to redraw political maps, they have not reached a resolution without court intervention in many decades.

Hortman said she believes that DFL control would result in drawing fair maps without the courts. But Daudt said single-party control would be bad for redistricting.

“They will most certainly gerrymander themselves into the majority for a decade,” Daudt said.