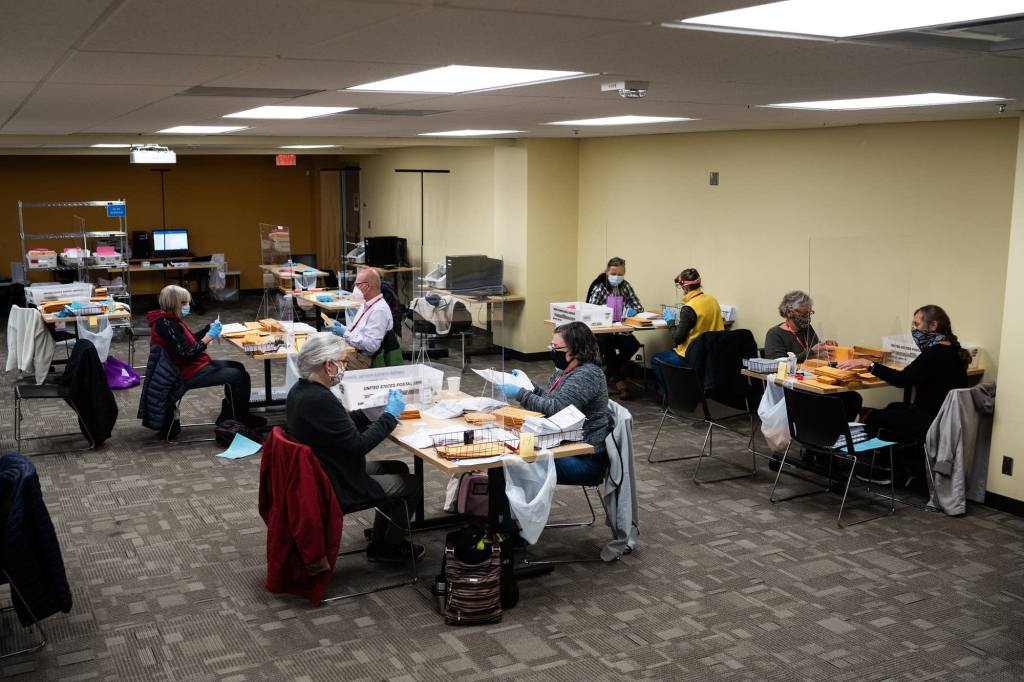 The continued surge in early voting comes as a court ruling has thrown into question Minnesota’s plan to count mail-in ballots after Election Day — as long as they were postmarked by Election Day. Secretary of State Steve Simon now says voters should bring their ballots to a dropbox or vote in person, rather than gambling that their mailed-in ballot will arrive by Tuesday.

As of Friday, around 388,000 Minnesotans have requested absentee ballots but not submitted them.

Overall, early voting — measured by the total number of ballots that have been cast and accepted — this year is equal to around 53 percent of Minnesota’s total 2016 turnout, and represents 38 percent of all eligible voters.

In the 2016 presidential race, Minnesota had the highest voter turnout in the nation: 74.1 percent of eligible voters.

So far, Minnesota’s early ballots have disproportionately come from counties with lots of Democrats. More than half of registered voters have already cast ballots in Hennepin and Ramsey, the two biggest DFL strongholds in the state.

In Republican strongholds like Sherburne County, less than 28 percent have voted.

But DFL-heavy counties also account for more unsubmitted ballots than other counties. Nearly 13 percent of Hennepin County’s registered voters have an absentee ballot they haven’t yet submitted, compared to 7 percent of Sherburne County’s.

These early voting totals account for people who requested an absentee ballot but — as is allowed in Minnesota — then later voted early in person. In those cases, the earlier absentee ballot is cancelled, meaning each voter only accounts for at most one requested and returned ballot.

The secretary of state will release final counts of absentee ballots requested and accepted on Monday. The remaining unsubmitted ballots could be in transit, or they could belong to voters who’ve decided to vote in person on Election Day instead.

Minnesota still plans to count all absentee ballots that are postmarked by Election Day and arrive at county election offices by Nov. 10. But this week’s federal court ruling has raised the possibility that ballots which haven’t arrived by Nov. 3 might be thrown out. Election officials have been ordered to keep these late-arriving ballots separate so they can be discarded if a later decision annuls them.