Robert Donald Hahn was born December 4, 1926 at St. Mary’s Hospital in Rochester, MN, to Dr. Christie (MacKenzie) and Arno Hahn. He graduated from Plainview Highschool in June of 1944 and enlisted in the US Navy on July 1, 1944. He served in the South Pacific in 1945 and 1946 and was honorably discharged June 26, 1946. Bob then went on to graduate from the University of Minnesota College of Pharmacy in 1950.

After working in Austin, Bob and Leonard Astrup opened what is now Sterling Drug in Albert Lea and Fairmall Drug in Fairmont, MN. Bob was a pharmacist for 55 years. 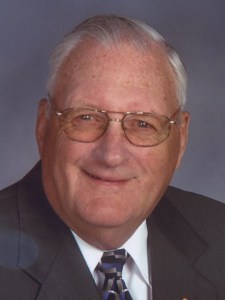 Bob was a member of United Methodist Church, Western Star Lodge 26 (the Masons, where he was a past Master) as well as other Masonic bodies. He was a member of Osman Shrine in St. Paul and enjoyed many Shrine parades. Bob was also a member of the American Legion and Golden K-1.

Memorial services will take place at 10:00am on Saturday, October 17, 2020 at United Methodist Church with Pastor John Mitchem officiating. Live stream of the service can be viewed at https://albertleachurch.online.church/. Private family interment will take place at Graceland Cemetery in Albert Lea with military honors provided by Albert Lea area Veterans.
In lieu of flowers, the family asks that donations be made to St. Croix or Mayo Hospice.