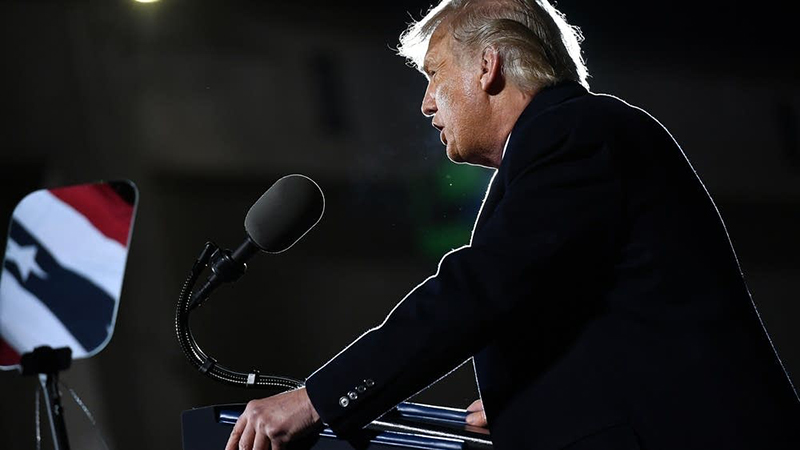 President Donald Trump and his wife tested positive for COVID-19. Trump was in Minnesota earlier this week for a campaign visit. Photo courtesy MPR News

With news that President Donald Trump and at least one staff member have tested positive for the coronavirus, there are questions about whether there was any spread during a campaign visit to Minnesota earlier this week.

Minnesota Republican Party Chair Jennifer Carnahan said she did not meet with Trump.

“Due to a busy campaign schedule that took me to other parts of the state, I was not at any events involving the President in Minnesota on Wednesday,” she said in a statement.

Carnahan said she has not been in touch with everyone in the state’s congressional delegation who were in contact with the president, but said she understands they are getting tested and self-quarantining until they get their test results.

Here’s a look at where Trump went and who he met with.

After landing at Minneapolis-St. Paul International Airport, Trump attended a fundraiser at a private residence in the Twin Cities suburb. Carnahan said there were about 40 people at the event.

“I have not been in contact with any of the donors who had been at that event,” she said. “My understanding as well, they were all required to take a negative COVID test with results within 24 hours of the president’s visit to donors, and it is also my understanding that people were not allowed to shake hands or come into that close of contact with the president while he was there.”

After the fundraiser, the president flew on Air Force One to Duluth, where he held a hanger rally at the airport there.

The thousands gathered on the tarmac included many who didn’t distance themselves from each other or wear face masks, with the notable exception of those behind the stage and in camera view.

According to a post from Rep. Jim Hagedorn, he and Reps. Tom Emmer and Pete Stauber flew with Trump to and from Duluth on Air Force One. Earlier this year, Hagedorn announced he’s being treated for stage 4 kidney cancer.

Republican Senate candidate Jason Lewis also posted that he was with the president in Duluth, but it’s unclear how close they were during that visit. He said he had no contact with White House staffer Hope Hicks, who has also tested positive.

On Friday morning, Lewis’ campaign released a statement said he is showing no symptoms and feeling fine.

“But out of an abundance of caution he has already begun the self quarantine process and will be getting COVID tested.”

“My wife and I were in close contact with the president. So CDC guidelines talk about the fact that we should get a test and quarantine for two weeks or 14 days. So we will do that,” Gazelka said. “I think it’s important that people know that this is a pandemic. It’s serious.”

He said the quarantine won’t affect his participation in an upcoming special session because rules allow him to vote remotely.

In a statement, Daudt said he is not currently experiencing any symptoms but will be tested Friday. He will self-quarantine until receiving results.

Daudt said he tested negative Tuesday ahead of Trump’s visit.