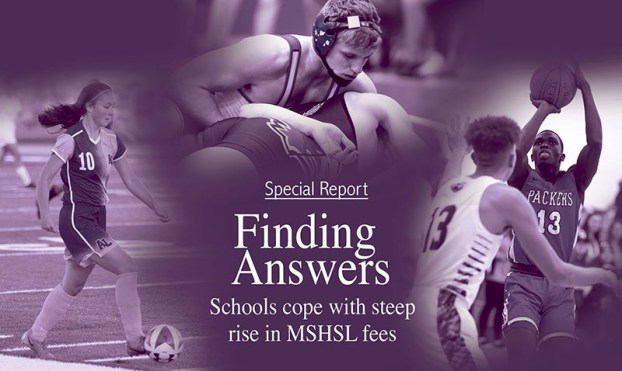 Editor’s note: This is part one of a two-part series featuring the raise in membership fees instituted by the Minnesota State High School League.

After seeing their membership fees rise much higher this year, school districts across the state of Minnesota were given another unpleasant surprise by the Minnesota State High School League when they received a letter that told them they had to pay a pair of COVID-19 fees — one by November this year and one by February 2021.

Despite the fact that the MSHSL is not holding any state tournaments in the fall, it is asking for all of its member schools to pick up the tab.

According to MSHSL Executive Director Erich Martens, the added fees are being used to help keep the state high school league running. Martens said the league is continuing forward with its goal to offer every activity throughout the entire year. He also mentioned many people might not see all the work that needs to be done behind the scenes and the new responsibilities the league has this year.

“Currently, this year, it’s rewriting guidance and protocols for a COVID world and trying to provide activities, so that’s happening in 44 different activities that we offer through the state high school league,” Martens said. “We vet those through our sports medicine advisory committee and we work with the department of health and the department of ed to review those plans and get those out to schools.”

On top of writing new guidelines and protocols, Martens said the league is still doing all of the things it would normally do, including working with advisory groups on the eligibility of student athletes, managing registrations and co-ops, training coaches and providing them with certifications required by state statutes, background checking and registering all officials, providing over $650,000 worth of catastrophic injury and concussion insurance to all student athletes and provide support for all member schools with any questions they have.

Albert Lea Area Schools falls into Class AAA and was billed $9,000 on top of its normal annual fees, bringing the total bill for the year to $13,999.

Albert Lea Area Schools Superintendent Mike Funk and Activities Director Paul Durbahn said they, along with many school board members, are concerned about the added fees.

Funk said he is upset because the league is asking all its members to pay this added fee without much explanation of what specifically it will be used for and what the plan for the future is. He also said he sent a letter with the school board’s concerns to the league some time ago and only recently received a response, but the response failed to address anything from the original letter.

“Our board is struggling with this because they don’t want to take away from the kids and not have them be able to participate in the state high school league activities, but at the same time they’re trying to weigh the principle of the matter,” Funk said.

Relief funds the school obtained from the federal government could be used to pay the fees, according to Funk. He also noted Albert Lea has the money to pay the funds, but the board doesn’t want to pay out money when it doesn’t know what it’s being used for. The new fees would also not affect the recent program put in place in Albert Lea, which allows student athletes and their families to pay what they can afford toward their registration fees.

Funk said there are other schools in the state thinking along the same wavelength as Albert Lea.

“Some are just paying it, others are taking a wait-and-see attitude and some of them are saying ‘This is wrong, we should not have to do this,’” Funk said. “At the end of the day, we do not want to hurt our kids here, but we want the high school league to do the right thing.”

According to a survey that was sent out to 25 superintendents in the southeast Minnesota region, including Albert Lea, Glenville-Emmons and Lyle, eight schools said they have not paid their membership fees yet.

Comments provided with the survey ranged from the fees being unfortunate but necessary to one school saying it was not planning to pay the fees.

Durbahn said the league has been working better with school administration after concerns by many schools were brought to light, however, he’s still concerned with the way the league is moving.

“A lot of what the league does, they do with a high level of respect and I hope that continues,” Durbahn said. “They’ve always been rooted in education-based activities, providing opportunities for all students and all types of schools, but this puts a pretty reasonable strain on our small outstate school districts and I fear they’re moving to a pay-to-play model.”

The increased fees and COVID-19 fees have had a bigger impact on smaller districts and its effects have had a double impact on Lyle-Pacelli, where each school is paying bigger MSHSL fees — despite the fact they co-op in most sports.

The districts co-op in every sport besides cross country, but each school is paying a separate membership fee and each school has been handed two COVID-19 fees, which are $1,500 each.

So far, Lyle and Pacelli have decided not to pay the fee until they receive more information from the MSHSL.

“It is something that we’ll have to discuss. The MSHSL hasn’t really told us how they’re going to correct this and there is no guarantee that they won’t tack on more fees to us in the future,” Pacelli principal Kane Malo said. “It’s really unfair with us being (a co-op) with Lyle. We’re playing one football team, but we’re paying double the amount for the sport. Both of us are paying the same amount at Austin High School.”

Both schools have avoided raising athletic fees to students for this year, but the high fees have had an impact on the budget. Lyle Superintendent Jamie Goebel said fees have made things a little tighter.

“The part that aggravates me is that it’s money that we should be spending on our students, athletically or academically,” Goebel said. “I know schools around the state are frustrated, because we don’t have a lot of data on why (the COVID fee is there). It’s our opinion that this COVID fee has a negative impact on our students. It should be going to the students directly and not to the state.”

While the annual MSHSL fee was about three times higher this year — which included a $1-per-student fee — Goebel and Malo were not totally upset with that aspect of the budget changes. They are concerned with the COVID-19 fee, especially at a time when the MSHSL does not have the cost of running any postseason events beyond Section 1A tournament play.

It’s no secret the MSHSL has been struggling with its budget after the pandemic wiped out a bulk of last year’s winter tournaments and spring season, but small schools don’t want to be the ones who have to pick up the bulk of the payment.

By Goebel’s calculations, Lyle is paying about $35 per student with its COVID-19 fee, while bigger schools are paying just $7 per student.

Malo would like to see Pacelli’s funds stay with the students.

“The state high school league is really almost trying to force us to pay their a million and a half to two million dollar shortfall that they’ve had throughout the years,” Malo said.

Lyle and Pacelli are both on the same page, and if one of the schools decides to pay the COVID-19 fee, the other school will follow suit.

“They were facing financial hardship before this and COVID just made that worse,” Goebel said of the MSHSL. “We have to review to see if it’s equitable or is it going to be put on us again in the future. Is this a one time thing? What have they done to change their budget? They shared a little bit, but they haven’t given us very many details. We’re looking for the why and what does this mean for us in the future.”

Malo and Goebel both agree that high school sports are paramount to the student experience when it comes to learning and mental health. They’d like to keep them affordable for families in the years to come.

Grand Meadow High School has also refused to pay the COVID-19 fee until it receives more information from the MSHSL. Grand Meadow Superintendent Paul Besel said the fees could cut into the aid that was meant to keep the school up and running safely in the midst of a pandemic.

Besel said the school has received some Elementary and Secondary School Emergency Relief funds, but he would rather save those for what they were meant for.

“It’s unfortunate that the MSHSL is in a rough spot financially, but every single school district is making some sort of financial adjustment to weather the storm,” Besel said. “I don’t think the intention of those funds was to pay the high school league. I think they were to help us keep the doors open and sanitize the school and maybe to hire more people with hybrid or distance learning opportunities.”

Grand Meadow does not charge students an activity fee for competing in sports and Besel would like it to remain that way.

In Austin High School, where the budget and student population is bigger, the fee hasn’t had a huge impact on what the school is doing. Austin sports fees remain $80 for the first sport, $65 for the second sport and a free cost for the third sport.

Look to Tuesday’s edition of the Tribune for part two of the series with more responses from the MSHSL as well as families within the districts.

Man sentenced to 35 years in prison for Waseca officer shooting

WASECA — Ten months to the day after he was shot in the head while responding to a report of... read more