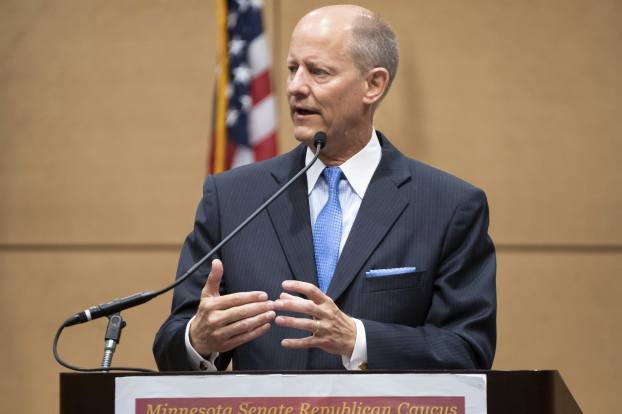 MINNEAPOLIS — Minnesota’s Senate majority leader said Tuesday that his caucus could’ve handled news of positive COVID-19 cases among Republican senators differently, after criticism from Democrats that included a call for him to resign from his leadership post and demands for full transparency.

Sen. Paul Gazelka is among at least four Republican senators who have tested positive for COVID-19 in recent days. Gazelka was criticized after the GOP held at least one in-person meeting as well as a post-election event that dozens attended, including some who later tested positive for COVID-19. He was also criticized — and asked to leave his leadership post — for not sharing news of those positive tests with his Democratic colleagues in advance of a special session last week.

Democrats called for full transparency and the disclosure of information that would help trace who may have been exposed.

“In hindsight, we could have handled the event and our information sharing differently,” Gazelka said in a statement. “I am committed to protecting senators, staff and the people with whom we come in contact.”

Gazelka said Minnesotans are constantly learning and making changes during the pandemic, and the Senate has to balance “sometimes by trial and error” restrictions for safety with a duty to represent constituents and be accessible.

“We don’t always get this balance right but it’s important that we learn from our experiences, exercise good judgment and work at constant self-improvements,” he said, adding that the current spike in COVID-19 cases is troubling, and the Senate will continue to push for a state response that protects people without destroying livelihoods.

Gazelka’s statement comes one day after Democratic Gov. Tim Walz called on Minnesotans to stop politicizing the pandemic and take precautions — such as wearing masks and social distancing — to keep people safe and hopefully out of hospitals, which are under increasing pressure due to rising cases and staffing shortages.

The Star Tribune reported that hospitalizations climbed to another record number on Tuesday, with 1,669 COVID-19 patients in inpatient beds, including 346 in intensive care. COVID-19 patients now make up more than 30% of the 1,115 critically ill patients occupying 1,455 immediately available ICU beds.

An additional 5,945 positive cases were reported on Tuesday, along with 26 more deaths. The state has seen a total of 236,949 cases since the pandemic began and 2,943 deaths.

By Albert Lea Tribune and Associated Press Hospitalizations across the state reached new heights on Tuesday as COVID-19 cases and... read more