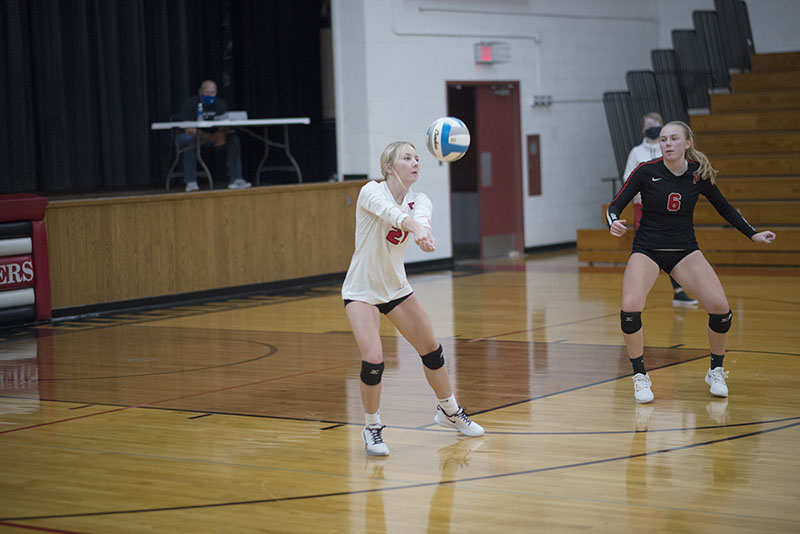 Senior Cambria Nissen hits the ball from the backrow Friday night against Bethlehem Academy. Nissen has one assist and nine digs in the 3-0 loss to the Cardinals. - Tyler Julson/Albert Lea Tribune

The Panthers faced off against a tough Cardinals team and were unable to come up with a win in their final match, falling in straight sets 25-15, 25-11, 25-11.

NRHEG was able to trade points back-and-forth with Bethlehem Academy for the opening portion of the first set. After being tied 10-10, however, Bethlehem Academy went on a 5-0 run, forcing NRHEG to take a timeout down 15-10. The timeout had little effect on Bethlehem Academy as it surged to a 10-5 run and a set victory.

The second set started much like the first, only this time the Panthers were not able to hold on as long as in the first set. The Panthers called a timeout down 14-7, but again, the break in action was not enough to slow down the Cardinals, who went on an 11-5 run to finish off the set.

It was the same story in the third and final set. The Cardinals jumped out to an early start and never looked back, going on a 15-5 run to win the match.

Erin Jacobson led the Panthers in kills with six. Kendall Johnson had five, while Anna Jacobson had three and Bree Ihrke, Raquel Fischer and Elli Baker combined for four.

“Thank you to the girls for an unpredictable season,” said head coach Onika Peterson. “Even though it wasn’t what we had expected or hoped for I am very grateful it was something we all were able to experience. This season should teach us all that we should not take anything for granted and to play like every game is our last because with everything going on it very easily could be.”

The Panthers finish the season 3-9 and will lose five seniors to graduation.