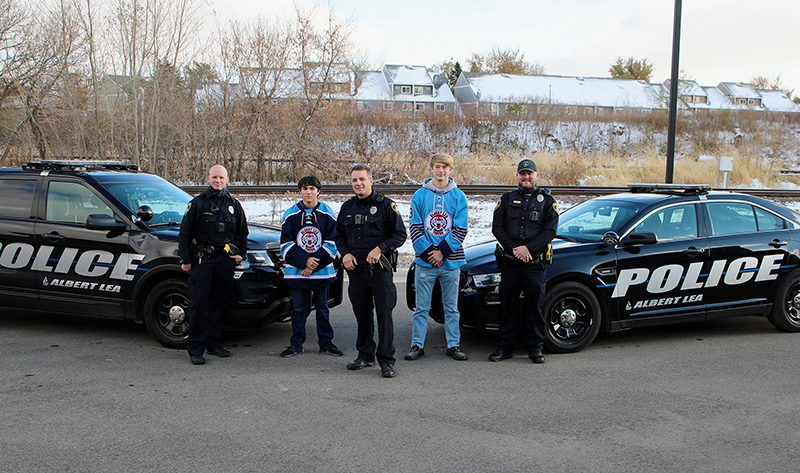 After having its annual golf tournament fundraiser canceled this summer due to COVID-19, the Albert Lea High School boys’ hockey team is trying out a new fundraiser — a “Hometown Heroes” calendar.

Partnering with the Blue Line Club, the team set out to honor the heroes of Albert Lea while raising funds for the program.

Melissa Barr, co-chairwoman of the Blue Line Club said the idea came about after seeing another area hockey team come out with a poster. She said the group thought a calendar would be better because it would allow them to space people out more and highlight more groups.

“It was kind of a collaborative decision to do a calendar,” Barr said. “The calendar would allow us to have photos in smaller settings, people could enjoy it all year and what a great way to highlight multiple different roles instead of just one.”

Local photographer Kelly Hendrickson took and edited the photos for the calendar and the group partnered with Church Offset Printing on the design and printing aspects.

Barr said all of the service groups they contacted to be in the photos jumped at the chance.

“All of these groups are so engaged in the community already,” Barr said. “They go about doing their jobs. It’s their calling and they’re honored to do that work, so to be highlighted for that work I think was humbling for them.”

J.D. Carlson, a member of the Blue Line Club, said all precautions were taken when shooting photos for the calendar. He said while some photos may look like they are standing close together, everyone was wearing their masks prior to the photos and put them back on immediately after.

“Everybody thought it was a great idea,” Carlson said. “Everybody loves a nice calendar. It’s a beautiful calendar. I think all the pages are going to mean a lot to people.”

Some of the calendars were sold in presale; however, there are still many available for purchase. Calendars are $20 each and can be purchased from any high school hockey player or by contacting Barr or Carlson. Players are currently working with Hy-Vee management to set up a table at the store to sell them as well.

“It was a fun project and a great way for the team to stay engaged,” Barr said. “Doing something positive, not only to support their team and their potential season, but to highlight those disciplines within the community that are working so hard right now.”