An Albert Lea man is facing charges after he allegedly injured a woman with a miniature ax Wednesday night at a motel in Albert Lea. 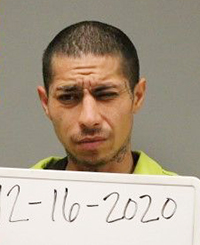 Ben Vidal Moreno, 30, faces charges of second-degree assault with a dangerous weapon and threats of violence, both felonies, according to Freeborn County District Court records.

Court documents state police responded to the motel for a report of a female who was stabbed by her boyfriend. When police arrived, the victim was in the manager’s apartment and was seated on the couch with bandages wrapped around her right wrist.

The woman reportedly said she had called police earlier after Moreno reportedly took money from her, but when officers contacted her, she lied and said it was someone else.

When officers left, Moreno reportedly began calling her names, yelled at her and spit in her face.

She dropped to the floor and covered her head with her hands, and Moreno then reportedly grabbed a miniature ax and held it to the back of her head and threatened to kill her.

She told police while her hands were behind her head, Moreno allegedly slid the knife across her wrists, causing the cuts. After being cut, she then drove to another person’s house to get bandages for her injury before returning to the manager’s office and calling police.

The victim said she had been previously stabbed by Moreno in the foot.

He is next slated to appear in court Dec. 31.