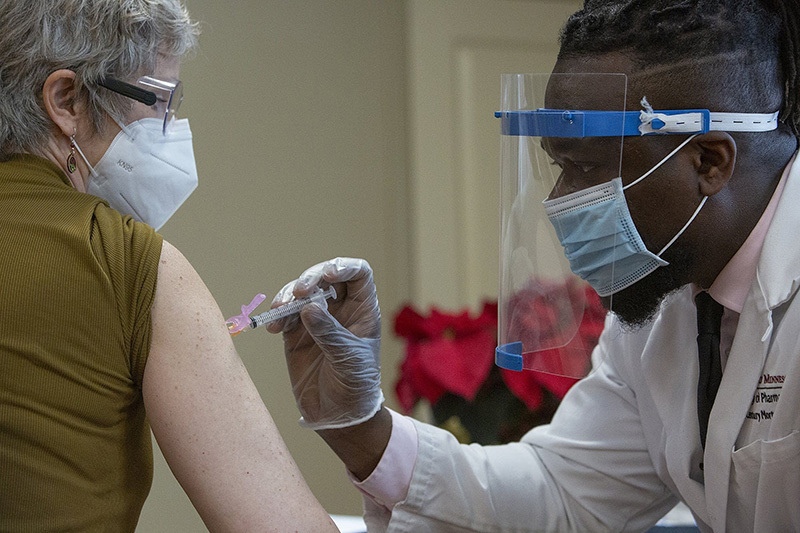 Pharmacy intern Joseph Ahenkorah administers a dose of the COVID-19 vaccine to Cari Giroir, a licensed practical nurse, at the Gardens of Episcopal Homes in St. Paul on Dec. 30. Christine T. Nguyen/MPR News 2020

Minnesota reported 18 more deaths caused by COVID-19 Tuesday, along with 1,612 new cases, showing slowing trends ahead of an announcement from Gov. Tim Walz that he’ll loosen restrictions on bars and restaurants.

The 18 additional deaths make it the second straight day with a toll of fewer than 20. That hasn’t happened since before Election Day.

At the same time, the state reported only 2,455 new vaccinations, putting the total at 80,857, and keeping vaccinations well behind the number of doses available across the state.

The latest numbers come as Walz plans to announce a rollback of restrictions for indoor dining this week, his office said Monday evening. Minnesota’s current COVID-19 restrictions, including a ban on indoor dining, run through late Sunday.

“Many of them are ready to put in mitigation efforts. But I think this idea that everybody is going to go back in maskless and pack these places, that’s not the way it’s going to look,” the governor said.

He said coronavirus test positivity rates are lower than they were when the restrictions were imposed, and hospitals aren’t under as much strain. Walz said he personally would feel comfortable eating at a restaurant once indoor table service resumes.

Walz is expected to announce his next steps during a live address at 2 p.m. Wednesday.

The announcement comes as Minnesota health officials say the state expects to receive enough COVID-19 vaccines to inoculate all its health care workers and most nursing-home residents by the end of January.

While enough vaccines are available for a first shot for all health care workers designated for phase 1A, which covers health care professionals, long-term care residents and others most likely to encounter the coronavirus, Ehresmann said it would take through the month of January to complete the first round.

Case numbers have been mostly stable, although Monday marks a notable upturn. That said, state data show unusual deviations in other areas, like the percent of positive tests. That’s often a sign of data anomalies that can be linked to holiday reporting schedules.

New hospital admissions jumped to 157, slightly over the seven day average for new hospitalizations of 122.

People in their 20s still make up the age bracket with the state’s largest number of confirmed cases — more than 80,000 since the pandemic began, including more than 42,000 among people ages 20 to 24.

The number of high school-age youth confirmed with the disease has also grown, with more than 32,000 total cases among those ages 15 to 19 since the pandemic began.

Although less likely to feel the worst effects of the disease and end up hospitalized, experts worry youth and young adults will spread it to older relatives and members of other vulnerable populations.

It’s of particular concern because people can have the coronavirus and spread COVID-19 when they don’t have symptoms.

Central and western Minnesota drove much of the increase in new cases over the past two months, while Hennepin and Ramsey counties showed some of the slowest case growth in the state.

Cases continue to fall statewide, with most regions dipping down to levels before the state’s COVID-19 surge that hit in November and early December.

Hot spots continue to pop up in rural counties relative to their population.

Even as new case counts ease from their peak a few weeks ago, the data shows people of color continue to be hit hardest.

Four new people were reported hospitalized since Monday, increasing the total people who have been hospitalized at some point during their illness to 103.

The new cases included the following:

• Three people in their 30s

• Three people in their 40s