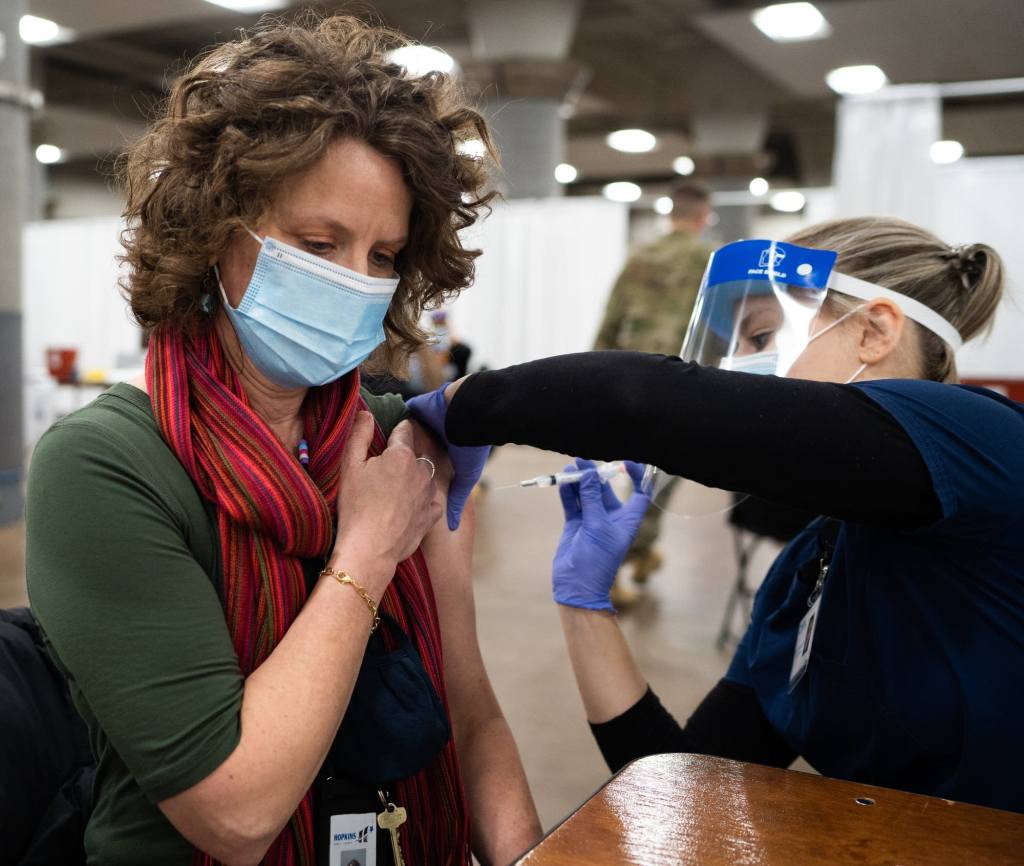 Molly Warden, who works with students on math and reading at Meadowbrook Elementary School in Golden Valley, is given her first dose of the Moderna COVID-19 vaccine by nurse Meghan Jo Higgins at a COVID-19 vaccine pilot site at Roy Wilkins Auditorium in St. Paul. Evan Frost/MPR News

When high school social studies teacher and basketball coach Becky Swanson found out she would be one of just four teachers in her district to get the golden-ticket first round of COVID-19 vaccinations, she was ecstatic.

“I got picked because I had a kidney transplant in November of 2019. I’m highly immuno-suppressed. I’m just very blessed that people in my district saw that I had a health concern that I would say is pretty major,” Swanson said.

Swanson teaches at Braham High School, about an hour north of the Twin Cities. After her superintendent called to tell her she was on the list, she paused in the middle of coaching a basketball game to sign up. A few days later she drove an hour to St. Cloud, and walked into a room filled with others getting their shots — many of them educators like herself.

“It was fast and efficient and easy,” she said.

Swanson said her experience during the first week of Minnesota’s vaccine rollout for educators was seamless.

But nearly two weeks into the state’s pilot program to vaccinate educators and child care workers, many of Swanson’s fellow teachers have met with chaos, confusion and disappointment — and a mad scramble for appointment slots.

“It should be good news about these vaccines, and it’s turning into ‘Hunger Games,’” said Nick Faber, president of the St. Paul Federation of Educators.

He’s been busy this week fielding calls and emails from teachers in his district who were frustrated about spending hours waiting online for appointments, only to be waitlisted.

Abbie Kaufenberg, a physical education teacher at L’Etoile du Nord French Immersion School in St. Paul, is one of those frustrated teachers who sat by the computer all night on Tuesday.

Kaufenberg said she received an email around 6 p.m. that gave her a link and password to sign up for a chance at getting the vaccine.

Two hours later, she filled out the forms. Finally, it offered her an appointment on Sunday. But by the time she clicked yes, the spot had vanished. When Kaufenberg filled out her forms again, she was put on a waitlist, which according to Minnesota officials is now more than 10,000 people deep.

‘Learning a lot as we go’

The chaos is in part due to a drastic change in pilot strategies from Minnesota leaders.

Last week, officials allocated a specific number of vaccines to individual districts, together with recommendations on how to prioritize staff for appointments. Districts sent out surveys and notified staff who qualified. But the tightly controlled system left no way for officials to reconnect with districts that had staff turn down their chance at appointments, and not all available vaccination slots were filled.

So this week, with the number of vaccines for teachers more than doubled, Education Department spokesperson Ashleigh Norris said officials stopped allocating doses to districts. Instead, they divvied up vaccines by region and asked districts to invite more teachers to sign up for appointments.

“I want to emphasize that this is a pilot, so we’re learning a lot as we go,” Norris said. “This week, knowing that we had a lot more, we decided we gave each district a recommended number of staff that they should share the registration link with, which was more than the number of slots that were available, knowing that not everyone was going to want it.”

But it wasn’t just a surplus of invitations that led to long waitlists. Some school leaders and teachers shared sign-up links with people they were not supposed to. The result was a surge in people clamoring for appointments and some coveted slots going to people not on priority lists, and others, desperate for a vaccine before returning to in-person classes, were left on long waitlists.

For teachers like Kaufenberg, it meant one more disappointment in a year full of uncertainty and frustration.

“It’s not even that I thought I was for sure going to get a vaccine. They have been clear all the time. But I thought that I was more likely to get a vaccine because only a small amount of staff were getting the emails,” she said. “It’s been a roller coaster of emotions.”

Kaufenberg’s district resumes in-person learning next week, joining many other schools that have started welcoming their youngest students back to classrooms. Her union is continuing to ask district officials to delay openings, saying the vaccine chaos is one more example of what happens when you rush systems faster than they’re meant to go.

Minnesota is one of 21 states to prioritize teachers for vaccines. Research published Tuesday showed that schools have not been a major source of coronavirus outbreaks, especially if proper mitigation measures are in place, such as masking and social distancing.

State officials have said they’re reviewing this week’s registrations to make sure everyone who registered is a school staff member. They also say they’re reviewing their pilot procedures and that more doses from the federal government should help with distribution issues in the future. 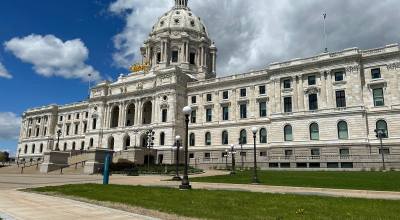 Work at Capitol not done as session deadline passes

78,000 pounds of infant formula arrives in US