Knights get off to slow start, fall to Jaguars in first game 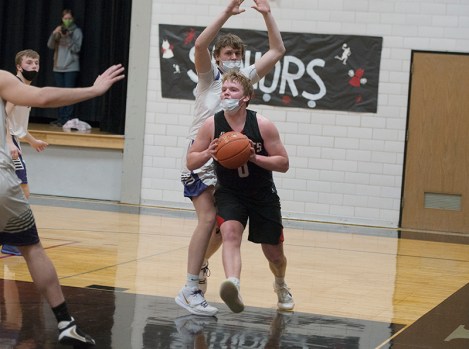 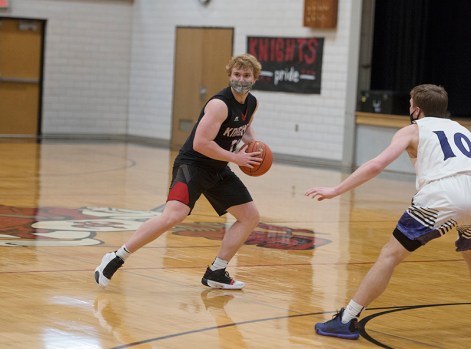 Senior Aidan Cummings looks to pass the ball off at the top of the key Thursdya night. The Knights came up short against the Jaguars in their season-opening game. Tyler Julson/Albert Lea Tribune 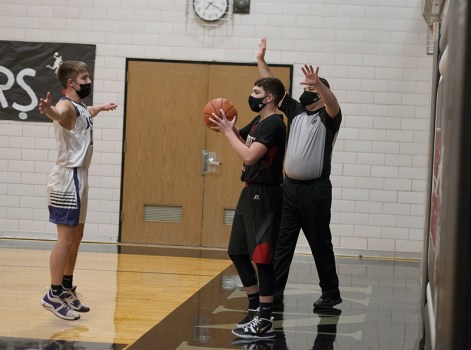 Senior Anthony Graham tried to throw the ball in during the first half of Thursday night's game against T/ML/GHEC. Graham had nine points in the game. Tyler Julson/Albert Lea Tribune

ALDEN — After having its first two weeks of the season delayed due to a positive COVID-19 case, the Alden-Conger boys’ basketball team opened its season against Truman/Martin Luther/GHEC Thursday night.

After struggling to get open looks at the basket through much of the first half, the Knights were not able to climb their way back into the game, eventually losing to the Jaguars 62-36.

It took a substantial amount of time for the Panthers to get their first field goal of the game. The physical full-court press from the Jaguars made it exceptionally difficult for the Panthers to find an open shooter. Finally, after more than 10 minutes of game time in the first half, the Knights got on the board with a short jumper from senior Derek Miller. Fellow senior Tyren Bolinger made a free throw moments later to add to the scoreboard. Seniors Ethan Greenfield and Aidan Cummings also contributed points before the halftime buzzer.

Alden-Conger went to the locker rooms trailing T/ML/GHEC 31-8 at the half.

While the victory was out of reach for the Knights to begin the second half, their offense came out firing on all cylinders.

Alden-Conger doubled its offensive output in the first four minutes alone. The surge was fueled by seniors Ashton Springer and Anthony Graham, who combined for 13 of the Knights first 15 points of the half.

In the end, however, the Knights still fell short of an opening-night win.

Springer led the team with 11 points after going scoreless in the first half. Graham ended the game with nine. Cummings totaled seven, while Miller, Bolinger, Greenfield and senior Alex Kuethe combined for nine points.

The Knights fall to 0-1 to start their season and will be back in action Monday when they travel to St. Clair to battle the Cyclones in a Valley Conference matchup.