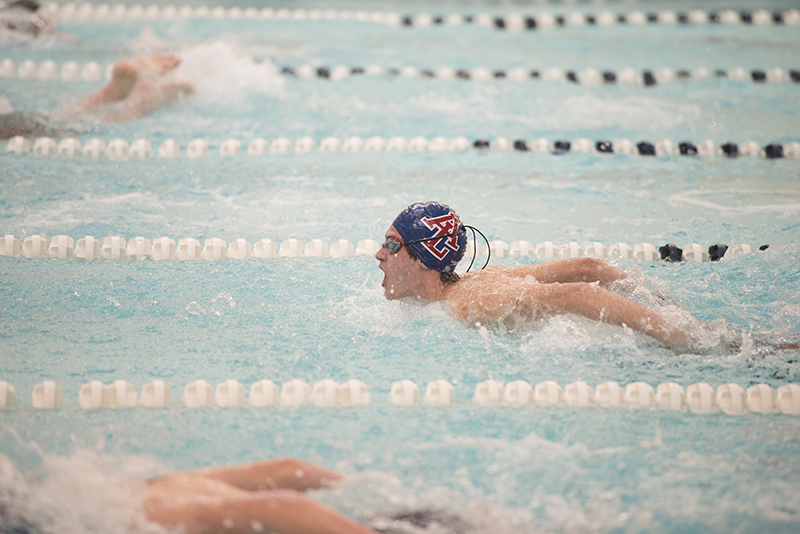 The Albert Lea boys’ swim and dive team hosted Winona Thursday night in one of its few in-person meets contested this season.

Despite some strong performances and numerous first-place finishes, the Tigers came up short of the Winhawks in the end, 75-73.

In the first event of the night, the team of freshman Jacob Taylor, sophomores Charles Brekke and Cannon Kermes, and eighth grader Gunnar Hardison swam in the 200-yard medley relay, coming in third place with a time of 2:24.80.

Senior William Taylor came in second place in the 200-yard freestyle with a time of 1:56.25. Seventh grader Brent Dahl also swam in the event, coming in third with a time of 2:05.51.

After a short break to account for no divers on either team, William Taylor put up the Tigers first win of the night, swimming a 53.07 in the 100-yard freestyle, more than five seconds faster than the second-place finisher.

Charles Brekke then swam in the 500-yard freestyle, finishing in fourth place with a time of 7:05.99.

In the 200-yard freestyle, the Tigers came in second place when the team of Kermes, Dahl, Pacey Brekke and William Taylor finished with a time of 1:49.89.

Dahl finished the 100-yard backstroke in first place with a time of 1:07.89. Jacob Taylor and Wangsness also swam in the event, coming in second and third places, respectively.

Pacey Brekke won the 100-yard breaststroke with a time of 1:20.66. Joshua Everett and Charles Brekke tied for second place, finishing in 1:30.79.

In the final event of the night, the team of Dahl, Pacey Brekke, Joshua Everett and William Taylor won the 400-yard freeestyle reley with a time of 4:14.27.

Albert Lea’s next meet will be the Big Nine Conference meet Friday at the Rochester Recreation Center.