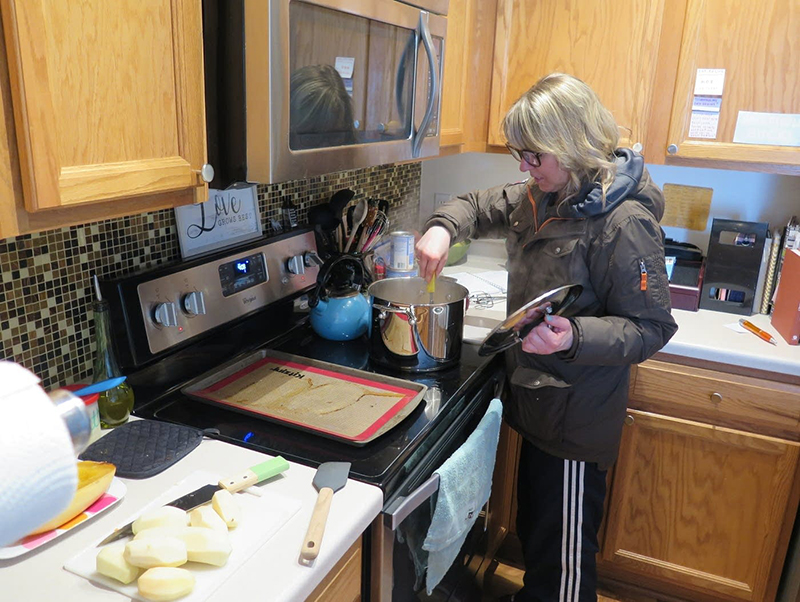 Nicole Crabtree prepares meals and snacks for her family on a recent morning. All of the food came from a local food shelf, and Crabtree wants others to know it’s OK to ask for help. — Mark Zdechlik/MPR News

STILLWATER — In the kitchen of the town home she shares with her four children, Nicole Crabtree is busy prepping meals and snacks for the family.

“These are oven-roasted sweet potatoes,” she said. “They’re our favorite way to have them, and I just keep them in the fridge for the week and kids kind of eat them as a snack or a side.”

All of the food Crabtree is preparing on this day came from a food shelf.

Last fall, newly divorced, unemployed and struggling mightily, Crabtree stopped into a community service organization in Stillwater called Valley Outreach. She wanted to see what food shelves were all about. She had never been to one.

Many food shelf users prefer privacy. Crabtree, 35, says she agreed to share her story in the hope she might inspire others in need to get help.

At a community center in St. Paul recently, people in their cars formed a long line waiting for the latest mass food distribution to begin.

Volunteers waved them up vehicle by vehicle, rewarding their patience with boxes of food and gallons of milk.

Much of the food came from Second Harvest Heartland, one of the nation’s largest food banks which is based in the Twin Cities.

CEO Allison O’Toole, who was on hand for the distribution, said people at the St. Paul center were getting a lot more than basic staples.

It was perfect timing, given the spike in demand for help, said Second Harvest Heartland Chief Operating Officer Thierry Ibri.

The headquarters includes a warehouse stacked high with pallets of food that are loaded on trucks and delivered to food shelves.

Some of the food is donated by manufacturers, Ibri said.

“Forty percent of the food that we get is rescued from supermarkets deemed unsaleable, but we deem it edible,” Ibri said.

Some food also comes from the government, and Second Harvest buys what it needs to fill the gaps. The nonprofit’s donor base nearly doubled over the past year.

O’Toole said more than 1 in 10 Minnesotans are food insecure — meaning they lack regular access to quality, affordable food — and that 1 in 6 kids in the state is considered food insecure.

“It’s never been closer to any of us, and we are seeing record numbers of people who need help who have never had to ask for help,” O’Toole said. “And that’s why we’re really asking this entire community to help us make it OK for people to ask for help.”

And O’Toole said a hunger divide breaks along racial lines like never before.

“That is the fact that populations of color — African American, Latinx, Indigenous, Asian populations — are experiencing twice the levels of hunger that our white neighbors are, and that is getting worse every day,” she said. “It is unconscionable, and we are doing everything we can to reach the community in the highest need.”

Nicole Crabtree knows as well as anyone that the need is real. And she agrees the most important thing is to use a food shelf if you need one.

“I think a lot of people are scared to ask for help,” Crabtree said. “I know I was. But I’m glad that I humbled myself enough to reach out for help, and it’s only helped me one-hundredfold.”