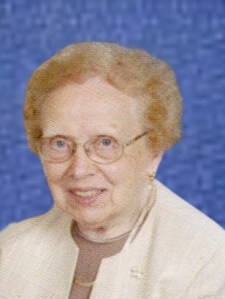 Funeral services for Mary will take place at 10:00am on Monday, February 22, 2021 at St. Theodore’s Catholic Church. Father Kurt Farrell will officiate. Family and friends may join us for a visitation one hour prior to the service.

Mary worked at the shipyard during the war in Evansville, Indiana. She helped with inventory slips so that they could get parts for the LST’s.

Mary met her future husband, Edward, in Evansville and the couple married on June 26, 1946. They then moved to Albert Lea where Edward lived and worked. To their union, two children were born, Marilyn and Mark.

Mary worked at Sears & Roebuck in the cashier’s cage, at Queen Stoves in the office and retired from Wilson Foods. During retirement, Mary volunteered at Thornecrest for many hours. Eventually working there where she helped with transportation. Mary also worked for Bonnerup Funeral Service and took pride in the work that she did. She lived for serving others during their time of need and she retired a second time at the age of 90.

Together, Mary and Ed raised many foster children.

Memorials in her honor may be sent to St. Theodore Cemetery, Albert Lea.

Thank you to family and friends for your support to the family.

A special thank you to the staff at St. John’s for the excellent care, you all were her second family during this Covid pandemic.