‘Neat to see this coming together’ 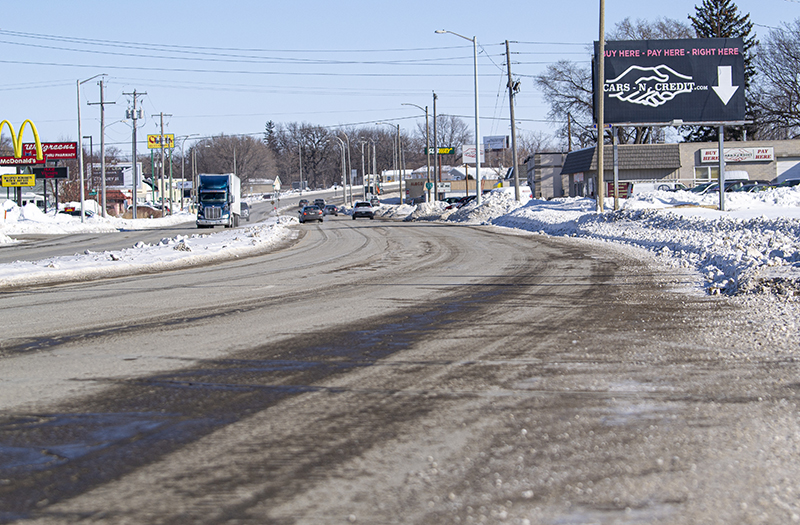 The reconstruction of East Main Street from Newton Avenue to the Interstate 35 ramps is slated to take place in spring 2022. Hallie Cantu/Albert Lea Tribune

Albert Lea residents are so eager to see East Main Street rebuilt from downtown to Interstate 35 they pitched one of the key intersections to be turned into a roundabout.

It was a first for Minnesota road officials.

“That was kind of a surprise,” said District 6 Project Manager Thomas Austin, “but it says a lot about the evolution of our safety designs.”

The intersection — William Street and East Main Street — won’t receive the circular renovation, but it is part of the $10.7 million project that will address flooding concerns closer to town and safety concerns further east.

Both issues have been voiced by local residents and officials for more than a decade.

“It’s really neat to see this coming together,” Austin said.

Plans and discussions about the project have been broken into three sections on Main Street, which is also known as U.S. Highway 65. The west segment runs from Newton Avenue, or the intersection that includes Wells Fargo Bank, to the Shell Rock River bridge; the middle segment is from the other side of the bridge, or Wilson Street, to just east of Ulstad Avenue where the road includes a median; and the east segment covers from between Ulstad and Felton avenues to just east of Blake Avenue, where the interstate ramps approach the intersection.

The work will not include the small bridge over the Shell Rock River or the larger railroad overpass almost immediately to the east.

Most of the western section will be entirely rebuilt, while resurfacing will dominate the road in other areas. Work on medians and adding barriers to direct traffic will cover most of the 1.7 miles from downtown to the interstate ramps.

The addition of sidewalks and shared use paths will run past Prospect Avenue when completed.

Final design work on the project runs through the fall, and the bid process commences in the winter. Construction should begin in spring 2022 and be completed before winter 2022.

The end result will be fewer Main Street closures due to melting snow or moderate rainfall. The road has been shuttered for as little as a few hours or as long as two weeks. In each case, local traffic and businesses are impacted. 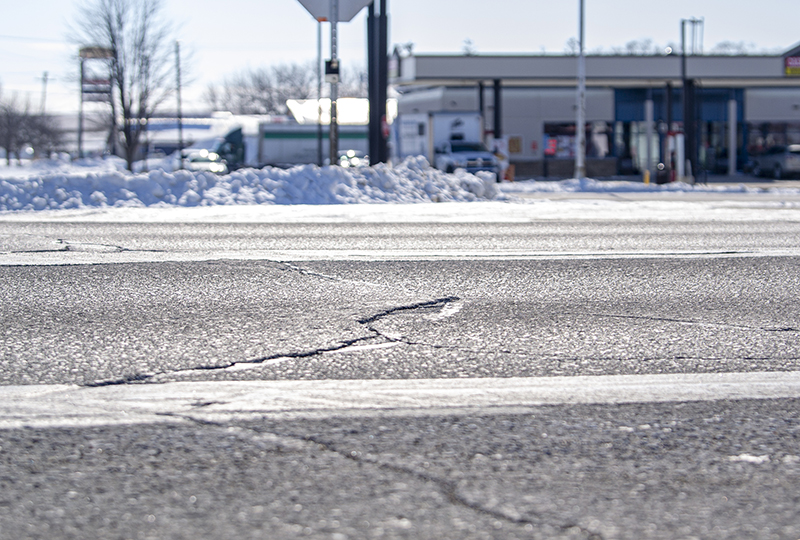 “It’ll keep that road dry for the local rain events, and we should eliminate those short-term closures,” Austin said.

They’ll do that by raising the road by 2 feet and adding two collection ponds on nearby property owned by the city. Road designers had considered a 3-foot addition but a cost-benefit analysis didn’t warrant the extra 12 inches. They also found that keeping the road dry year-round would require adding an impossible 5 feet of height.

Water would simply move with a higher road, shifting the problem onto businesses currently not affected by the low-level flooding.

At a 3-foot increase, “it would potentially take out their ability to operate,” Austin said. “As the road goes up, water is dispersed even further.

“At 2 feet, there will be no additional new flooding on the properties. We found a good balance with the city.”

The collection ponds will be located at the base of the Main Street hill, one on each side of the road, between East William and East Clark streets. They will be owned and maintained by the city of Albert Lea.

The new height will be able to handle a 10-year flooding event, or a heavy-precipitation storm that occurs once every 10 years.

The Main Street/Highway 65 stretch between the Shell Rock River bridge and Blake Avenue near Walmart covers 1.7 miles. The four lanes of traffic, higher speed limits and multiple cross streets with only stop signs combine to make it one of the most dangerous in the area.

State officials said of the 87 crashes on that stretch between 2010 and 2020, 72 were right-angle crashes, where one vehicle is T-boned by another.

In those cases, serious or fatal injuries are more likely than in other types of crashes.

“Given the size of the investment in the project, we needed to address safety concerns, as well,” Austin said.

They’ll do that by building reduced conflict intersections, or RCIs.

Most of the intersections on that stretch of Main Street each has 32 points of conflict — areas where a collision could occur given the vehicles’ positions on the roads. Many of these have to do with crossing one set of two-lane travel on Main Street to turn left onto the other set of two lane travel. Or simply crossing all four lanes.

The RCIs will eliminate those by eliminating the option to cross all four lanes at smaller, less busy intersections. They will also force people wanting to turn left to instead turn right with the two-lane traffic and then turn left, cross the median and left again onto the desired two-lane highway.

A new state law allows drivers to cross multiple lanes to reach the left turn lane from a right turn.

“When you’re sitting on the south side of Morningside, you can now turn directly into the far left lane from the stop sign,” Austin said.

While the distance covered by vehicles to point the same direction will increase, officials expect traffic flow and safety to improve. Instead of 32 points of conflict at those intersections, the RCIs will have just 12 points of conflict.

“It will provide the same mobility but it will take some getting used to,” Austin said. “It simplifies the decisions drivers have to make.”

“If you’ve never been through an RCI, it’s gonna take some thought,” said Cindy Morgan, MnDOT public engagement coordinator. “While it is a change and it is challenging, everyone can agree on the benefit.”

There are more than 40 RCIs in Minnesota, including two in District 6, which includes Albert Lea. Another four are included in area projects. Mason City, in northern Iowa, also has a few.

Morningside Road and Prospect Avenue will be the focus of the RCIs, while the area between Garfield Avenue and east of Ulstad Avenue will add left-turn lanes at some crossing streets and close that ability on others.

The $10.7 million price tag includes the pre-construction costs which are currently underway. Construction work on the road is estimated at $9.3 million.

The state is covering 80% of the construction costs. The remaining 20% will be funded by bonds the Legislature approved in 2020 and by the City of Albert Lea.

Once done, the road, sidewalks, curbs and gutters should be good for a 20 years worth of use.

While work is underway, officials expect a short-term detour near Blake Avenue and a long-term detour from Newton to Garfield.

Austin said rebuilding a majority of the 1.7-mile stretch is a “significant investment in infrastructure” but necessary.

“We were able to take a step back and look at the whole corridor — are there things we can do beyond preservation?” he said. “This is something we can do to improve all modes of transportation.”

As for the William Street roundabout, it still could happen, just not with this project. There are too many impacts to property owners right now, and the current plan meets the safety needs determined by state engineers.

Maybe give it a few more decades of nudging by the public.

“That suggestion certainly made us think about it,” Austin said.

Big Freeze activities to allow for fun and safety