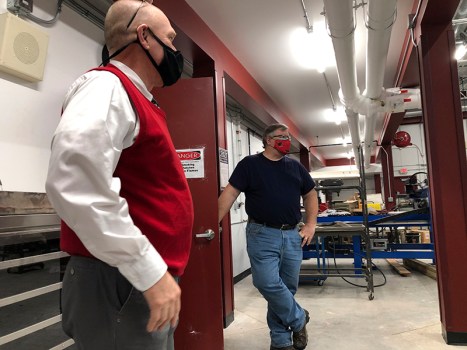 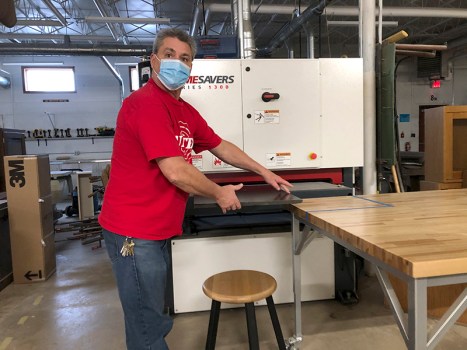 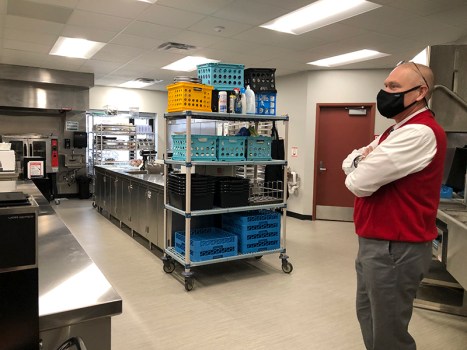 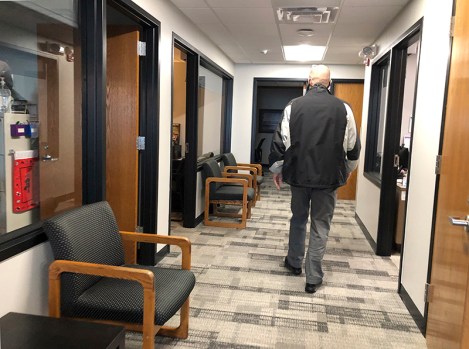 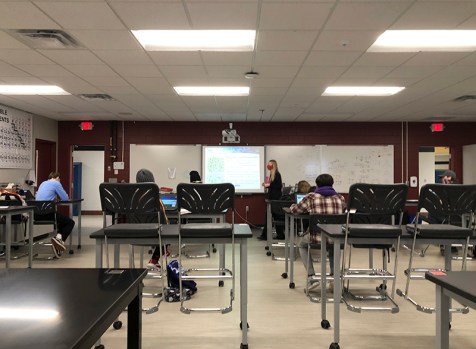 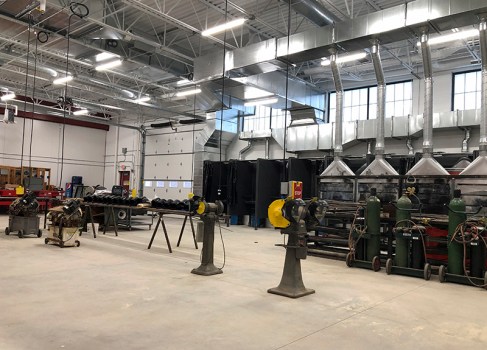 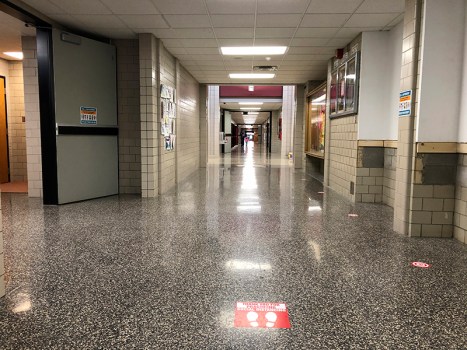 One of the main hallways is shown on Tuesday, Feb. 2 at NRHEG Elementary School in Ellendale. David Mayberry / Albert Lea Tribune 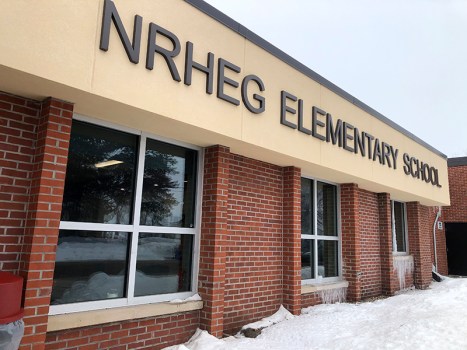 The exterior near the main entrance is shown on Tuesday, Feb. 2 at NRHEG Elementary School in Ellendale. David Mayberry / Albert Lea Tribune

“You’re going to feel it but not necessarily see it,” said Superintendent Dale Carlson.

The almost completed renovation project was dominated by work on HVAC maintenance plans at the school district’s buildings in New Richland and Ellendale. And while it isn’t visible to most, “hopefully people will know the mechanical work was needed,” Carlson said.

Voters approved $9.1 million to clean the air at the buildings, but also upgrade technical, science and family consumer science areas, improve security at the elementary school, and make the bathrooms ADA compliant.

The career technical education, or CTE, areas were a purposeful focus.

“When talking to people, there was really strong community support for the CTE programs,” Carlson said. “We are very fortunate to have great support from the communities.”

At the high school in New Richland, the tech areas, once housed in one room, are now split. That combined space now belongs solely to the wood shop.

“It’s a lot more space for all of them, but it’s also a lot safer,” said Carlson, who is in his final year as superintendent with NRHEG.

The wood area now includes a small classroom toward the back and a paint/finish booth.

The metal shop, which Carlson called one of the project “showcases,” was formerly a green space outside some doors. Now, it’s home to welding and other equipment after it was finished in November.

“As soon as the kids finish early coursework, they’ll be ready to come in here,” said Dan Sorum, agriculture teacher.

Outside the doors of the metal area and down an access road to the west is a new 1,800-square-foot greenhouse. There’s space to add a prep house or classroom area on the east side, if officials someday decide to expand it. Plants are growing inside, and a sale is planned for the spring.

A room dedicated to chemistry received a lot of work. The floor was gutted, and workers added new cabinets, desks and a fume hood. The latter is two-sided and separated by a glass pane, allowing more students to conduct lab work at the same time or allow demonstrations to occur on one side of the hood as students perform the same work on the other side.

The biology and physics room also needed significant floor work. In this room, desks and tables are on wheels, allowing for varied seating arrangements depending on the instruction.

A classroom was eliminated — and incorporated — into the new space, and it flows into the kitchen area. Three food prep stations feature Kitchen Aid mixers, and the cooking and cleaning areas look identical to a restaurant’s set up.

At the elementary school in Ellendale, the focus was on the main entryway and security.

The main entrance was moved from the north doors to the east side, closer to the secretary and administrative workers.

A new set of locked doors forces visitors through the main office. Access to the main hallway is also at the behest of the secretaries.

Previously, school officials watched monitors to let people in the north doors, which were at least 100 feet from the office. At that point, visitors also had access to the rest of the building.

A conference room was moved and expanded, and all of the offices renovated.

Workers also completed some tuckpointing work at both buildings.

Like the high school, the bulk of the work done in Ellendale can’t be seen today. The air moves better and feels better due to the HVAC upgrades.

The school district has a to-do and wish list of other projects that officials are chipping away at, but “annually we want to make sure we take care of what we have,” Carlson said.

Among the wishes: upgrades to music and several elementary areas; skylights; and leveled floors.

For now, the clean air is more than welcome. Amid the pandemic, NRHEG officials are anticipating an increase in summer programming, meaning more kids in the hallways during the hottest days of the year.

“The timing is good,” Carlson said. “The building will help with that.”