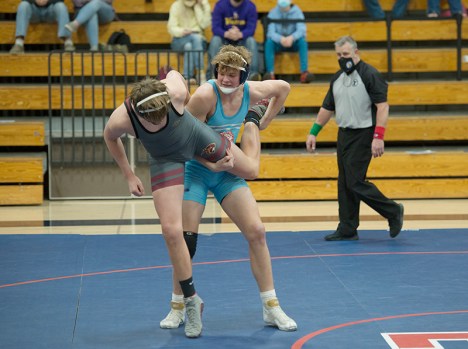 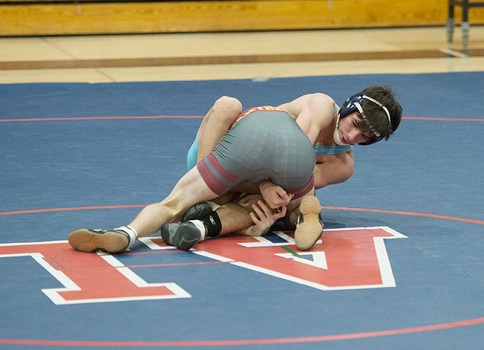 Senior Joey Floers maneuvers his opponent on the mat Thursday night. Flores won both of his matches by pinfall. Tyler Julson/Albert Lea Tribune 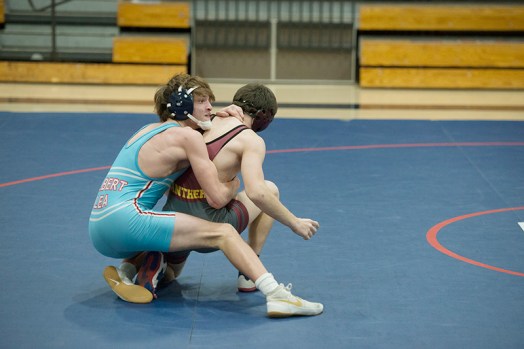 The Albert Lea wrestling team is up to six consecutive dual wins after victories over Pine Island and Manakto East Thursday night.

The Tigers dominated both teams, widening the winning margin from their previous meetings with both teams this year.

In the dual against Pine Island, Albert Lea went on a run and won the first 12 matches of the dual. Eighth graders Nick Korman and Brody Ignaszewski, sophomores Luke Moller and Kadin Indrelie, and senior Joey Flores all picked up pinfall victories. Eighth grader Logan Davis won in a 16-0 technical fall, while sophomore Henry Eggum and senior Trevor Ball both won via decisions.

In the dual against Mankato East, Albert Lea got started with a 32-0 run before surrendering their first match.

Korman and senior Caleb Talamantes each received a bye.

The Tigers improve to 16-10 this season in dual action. They will be back on the mat for the final time in the regular season Saturday against Stillwater and Northfield.