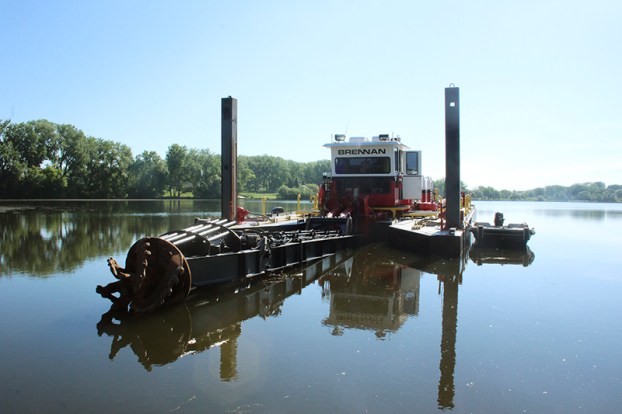 The dredge, equipped with cutterhead, sits in Edgewater Bay on Thursday at the boat landing as it continues to be prepared for its launch. - Sarah Kocher/Albert Lea Tribune

The House Capital Investment Committee on Tuesday heard more information about the $7.5 million bonding request to dredge Fountain Lake during a virtual hearing regarding bonding proposals across the state.

Shell Rock River Watershed District Administrator Andy Henschel said District 27A Rep. Peggy Bennett presented the bill and talked about the improved water quality she has seen since the dredging began and how critical it was to complete the project this year.

Then Henschel testified and presented details about the project, the funding, the phases completed to-date and why it was essential to secure funding for the project this year.

Dredging began on Fountain Lake in 2018. The first two phases have been funded by an initial $7.5 million in bonding appropriation and $9.5 million in local option sales tax funds. More money is needed to complete the final phase of the project, which includes the east basin of the main bay, Bancroft Channel and parts of Bancroft Bay.

”We were very pleased to be able to present to the committee,” Henschel said. “It’s an important step in getting information before key decision-makers.”

He said many of the committee members were familiar with the project, having been a part of the original bonding request in 2014 and because of the many bonding tours to the area.

“One of our key emphasis was how important it is to the successful competition of the project to secure funding for this session,” he said. “Based on follow-up questions from the committee, I believe they understand that.”

He noted how much leaders of the watershed district appreciate the support of Bennett and District 27 Sen. Gene Dornink for the project, and they will continue to work closely with them and other key committee leaders.

Committees are in the information-gathering phase and will not likely begin making decisions about bonding bills until sometime in April. The House and Senate are taking different approaches to assemble their bonding bills this session.

During its board meeting Tuesday, the Shell Rock River Watershed District Board of Managers approved a loan agreement with the Minnesota Pollution Control agency for $1 million as part of the Minnesota Clean Water Partnership Loan Program.

Henschel said the district is pursuing the loan to improve cash flow stability as it moves into the final parts of the second phase of the dredging project this year.

The loan program application was submitted in February, and the district was preapproved to move forward with the process to obtain the loan through the MPCA.

Payback of the loan can start as late as three years after it is approved and must be paid back in 10 years. The loan will have no interest.

“I believe it is a good deal for the district and will allow us to capture the most we can with our local option sales tax and to use that down the road to help pay off this loan program,” Henschel said.

The board also approved contracting with Dorsey & Whitney to perform a general obligation note and opinion regarding district finances for the loan program. The contract will not exceed $5,000.

Henschel said the note and opinion are required for the loan program.

Court states commissioners should have given reasons about why it set salary at lower figure The Minnesota Supreme Court on... read more