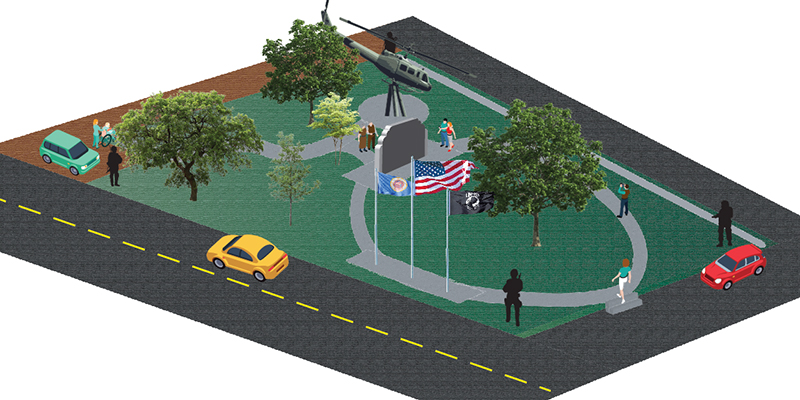 A committee in Emmons is moving forward with plans for a future veterans memorial in the community.

Clair Dagestad, president of the Emmons Veterans Memorial Committee, said the group has been working on the project for about two years — including purchasing the land where the memorial will be. Last week, the committee revealed the proposed drawing for the memorial, which will include a monument in the center; the Minnesota, United States and POW flags in one corner; and a helicopter static display in another, all joined by various sidewalk paths. Silhouettes of service members will be placed at the corners of the memorial park.

The memorial will be off of U.S. Highway 69 as people go south out of town. Dagestad the space used to be known as the old free show park, and a sign is posted there now letting people know of the future plans.

Dagestad, who served in the U.S. Air Force and Air Force Reserves for more than 20 years, said the group this year hopes to raise enough money to put up the three flag poles and the silhouette service members. He estimated about $10,000 would be needed for the flags and poles and $10,000 to $15,000 for the concrete needed for the project.

Next year, he hoped the actual monument could be completed and set, which is estimated at $10,000, and the final year, the helicopter static display could be installed.

Dagestad said there was a veterans memorial in Emmons in the 1940s that had the names of veterans who served in World War II. The front of the new monument will be similar to that memorial, and then the back will feature other veterans who want to have their name, branch of service and war served in for $100 per person. Any veteran, whether from Emmons or another location could be included. The committee is open to people who want to sponsor a veteran on the monument, as well.

“We’re getting our feet on the ground right now,” he said.

The group meets once a month, and he said the group hopes to have some fundraisers planned for this summer.

People who wish to donate can do so by writing a check to the Emmons American Legion, designating that the donation goes to the “Emmons Veterans Memorial.”