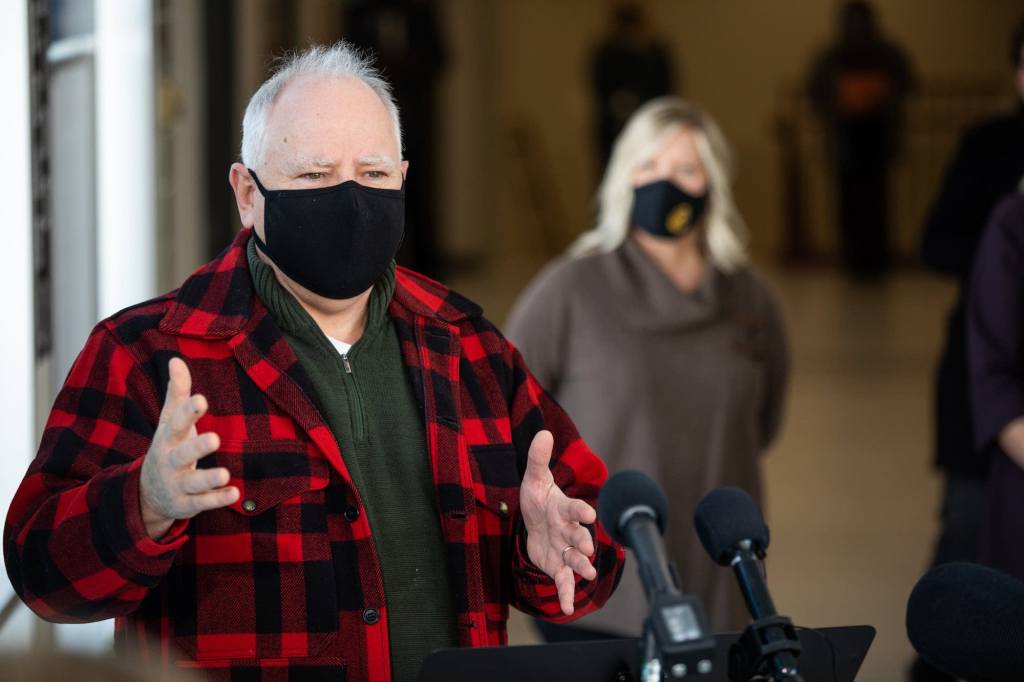 Gov. Tim Walz is pulling back on some of Minnesota’s remaining COVID-19 restrictions, almost a year after he first imposed emergency measures.

Starting at noon Monday, people will be able to gather in groups of up to 50 people outdoors and 15 indoors, while indoor capacity at bars and restaurants will increase to 75 percent. Bar seating will increase to parties of four.

Capacity limits will also go up at fitness centers — up to 50 percent — and entertainment venues — 50 percent, with a limit of 250 people.

The occupancy limit goes away for religious services and at salons and barbershops, but social distancing will still be required.

The state is also rolling back restrictions on large venues, effective April 1. This means that the Twins will be able to host up to 10,000 for their home opener next month at Target Field. Minnesota United will also be able bring soccer fans into Allianz Field for its late-April home opener.

Starting April 15, remote work will no longer be required but strongly recommended. But employers should still accommodate employees who want to work from home, according to a statement from the governor’s office.

“We’re beating this thing. We are going to win. It may not be the end but it’s sure the beginning of the end,” Walz said in remarks Friday morning. “Normalcy is on the horizon.”

The governor said people can start planning for events like spring weddings and summer camps.

He urged Minnesotans to continue wearing masks and socially distance in indoor gathering spaces and take other steps to stem the spread.

Officials remain worried that COVID-19 strains trickling into the state could push up caseloads. The state Health Department on Thursday said it had confirmed the first case of the worrisome so-called South Africa variant in Minnesota.

Health Commissioner Jan Malcolm on Friday described a race against time now to get more Minnesotans vaccinated quickly so that the new variants can’t take hold.

Walz has been under pressure to reduce COVID-19-related curbs on bars, restaurants and other public gathering places given that the state’s pandemic conditions have improved significantly over the past month and vaccinations are accelerating.

Twins executives said Friday the team was thrilled the new rules will allow for fans starting with the April 8 home opener against the Seattle Mariners. The team said it will soon announce its next steps on ballpark rules and ticket plans.

Walz recently said that big events such as June weddings and the Minnesota State Fair were within reach given the pandemic metrics and the pace of vaccination.

The announcement also brought praise from some Republicans, who have spent months criticizing Walz over the extent of the restrictions.

“I know that we’ve got event centers right now calling brides and grooms, and they’re trying to get things moving right away,” Baker said. “We don’t want to lose any more business outside of the Minnesota borders.”

Baker is still encouraging Walz to provide better warning to businesses so that they can plan ahead for restrictions being lifted.

After changes in guidance at the federal level, the Minnesota Department of Health said Thursday that long-term care facilities should allow “responsible” indoor visiting for all residents, regardless of the vaccination status of residents or visitors.

There are limits on visits — including if unvaccinated residents are in a county where the positive test rate is more than 10 percent and less than 70 percent of the residents in the facility are vaccinated. Visits are limited in cases where residents have confirmed COVID-19 or are in quarantine.