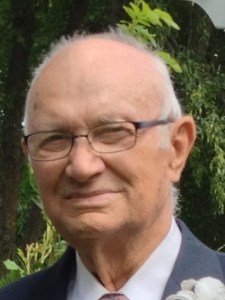 Orlando W. Meyer was born on January 11, 1925 in rural Walters to Emma (Huper) and Emil Meyer. In 1930 the Meyer family moved to the farm where Orlando continuously lived until his death. He was baptized and confirmed at St. John’s Lutheran Church in Walters, where he was also united in marriage to Evangelene Marie (Ahnemann) Meyer on September 30, 1948. When he was not keeping his four boys in line and standing up straight during church services, Orlando stayed active at United Lutheran Church as Sunday school teacher, youth organization advisor, and church council member.

In 1942 he graduated from Kiester High School, after which he began his lifelong profession of farming and continued his lifetime avocations of hunting, fishing, and conservation practices. Following his retirement from farming, Orlando earned a Master Gardener certificate from the University of Minnesota. Orlando felt fortunate to visit many places, family, and friends over the years. He was globally minded, open to learning about other cultures. He and Evangelene traveled the world and hosted international guests from many countries at their home and farm.

Due to the global COVID-19 pandemic, burial and memorial will be held at a later date.