Funeral services for Ray B. Larson will be held at 11:00 AM on Tuesday, March 23, 2021 at Silver Lake Lutheran Church, rural Northwood, IA, with Rev. Randy Baldwin officiating. Visitation will be held from 5 – 8 PM on Monday at the Mittelstadt Chapel, Lake Mills, and again one hour prior to the service at the church on Tuesday. 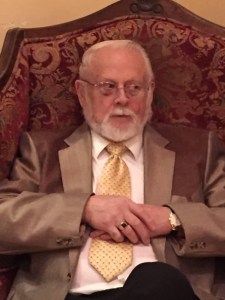 The service will be recorded and uploaded to the Schott Funeral Homes website following the service. Go to www.schottfuneralhomes.com, click on his picture, and from Ray’s obit page, click on the “tribute wall” tab to find the webcast link.

Ray passed away peacefully on Friday, March 19, 2021 at Lafayette Manor in Darlington, WI. He was 81 years old.

Ray Bryan Larson was born on May 10, 1939 to parents George and Betsy (Bakken) Larson in Albert Lea, MN. He grew up and graduated from Northwood High School. Following his schooling, Ray enlisted in the United States Navy. He served his country honorably aboard the USS Kidd from 1957 – 1961. A highlight later in his life was being able to re-visit the ship with his family later in life.

On February 3, 1962, Ray was united in marriage to Lois (Nelson) in Hayfield, MN. To this union, two children were born. The family called Stewartville, MN home.

Ray spent 35 years working for Mettler Toledo Scale as a Service Technician. Following his retirement, he drove limo for Clements Chevrolet in Rochester for a few years. He was a member of a few local car clubs, and was involved in the Emmons Legion Post 317. When he wasn’t working, you could find Ray working on old cars. He could take a car in the worst of shape, and quickly turn it into a treasure. He had a love for cars, but the biggest joy in his life came from his family. His children and grandchildren meant the world to him. He was an amazing husband, dad, and grandpa, and will be dearly missed by all who knew him.

He is preceded in death by both parents; wife, Lois in 2017; a daughter, Kim Hegna in 2000; grandson in-law, Ken O’Conner; sister, Blanch Larson; brother, Leland (Sally) Larson; and a sister in-law, Margaret Larson.