Selmer Alton Davidson (Sam), age 83, Olympia, WA, passed away at 11:25AM on February 21st in an assisted living residence surrounded by his wife Peggy, children and grandchildren. He was born on July 10th, 1937 into a Norwegian farming family, as the middle of 5 children born to David and Mildred (Anderson) Davidson. The Davidson family farm was on the MN-IA State Line west of Emmons. He grew up with three brothers and one sister, learning to farm, handle horses, and make jokes.. His friends and family will tell you that, according to him, he walked to and from school every day through deep snow, uphill both ways.. Though he earned a law degree, and practiced law. He always thought of himself as a Minnesota farmer, and never forgot his Norwegian heritage. 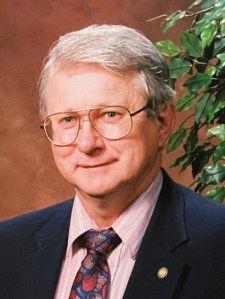 After graduating from Emmons High School in 1955 he worked as a pole lineman for the local telephone company, then did a hitch in the Army in Korea. After discharge he worked in a steel mill until he entered the University of Minnesota studying as much history and poli-sci as he could. He supported himself as a night watchman and telephone operator, when not in class, with a couple quarters spent in the Texas oil fields.

He then married and headed for Georgia and the Walter F George School of Law at Mercer University in Macon, Ga. Three years and two children later he had earned a JD and headed north where he worked for the IRS and then State Farm Insurance before returning to the Army as a captain in the Judge Advocate Corp. He spent a year in Vietnam, while his wife and two children awaited his return in California; then the family traveled to Germany for three years, where their youngest child was born The family had the opportunity to travel by camper around Europe, including Norway and Spain. He retired from the Army at Joint Base Lewis-McChord, Washington in 1986.

During his time in the Army he served as a defense attorney, and continued after retirement. He felt defense was the most needed and noble of an attorney’s callings. He loved the law almost as much as he loved his family.

He is preceded by his parents, two brothers, and a son-in-law. He is survived by his sister, Bernie, his brother, Ken, his wife, Peggy, his daughter, Lesli and fiancé, Joey Schremm, his son, Craig and wife, Elizabeth, his younger daughter, Sherri, and three grandchildren, Andrew and Mark Davidson and Samantha Owens