Should changes be made at intersection on Bridge Avenue? 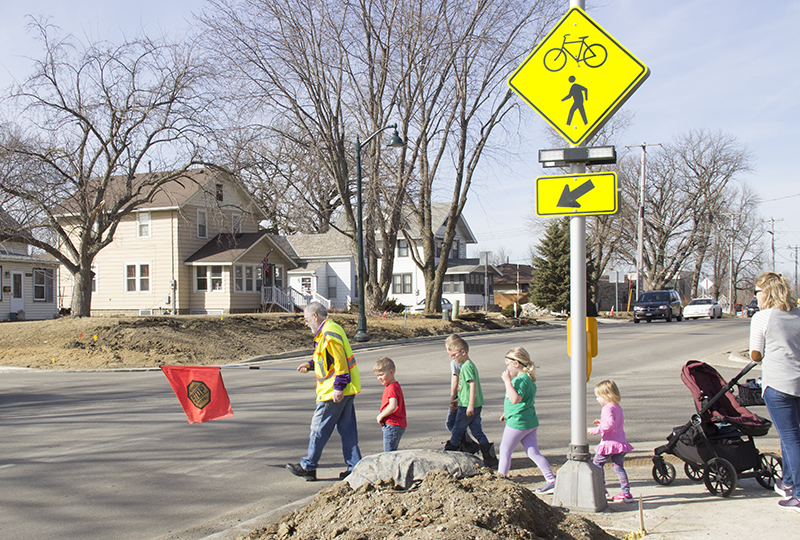 The school crossing guard leads a group across Bridge Avenue at the Hawthorne Street intersection on Monday afternoon at about the same time school was getting out for the day. Sarah Stultz/Albert Lea Tribune

Residents are questioning the safety of the Bridge Avenue and Hawthorne Street intersection after the removal of traffic lights there during construction last year.

In place of the lights, motorists traveling east or west on Hawthorne Street have stop signs, while motorists traveling north and south are met with bright yellow signs equipped with lights called rapid rectangular flashing beacons. The signs point to the crossing in the street and light up when a pedestrian pushes a button, signaling he or she is ready to cross the street.

Ashley Busall, whose parents live on Hawthorne Street near the intersection, said without lights or stop signs for the north and southbound traffic, cars are traveling too fast on the corridor and she is fearful for people crossing there. There have been times when the lights are flashing and motorists are not stopping for the pedestrians, she said.

While the crossing guard is helpful before and after school — Hawthorne Elementary School is only a few blocks away — she worries about other times throughout the day when children or others may cross. 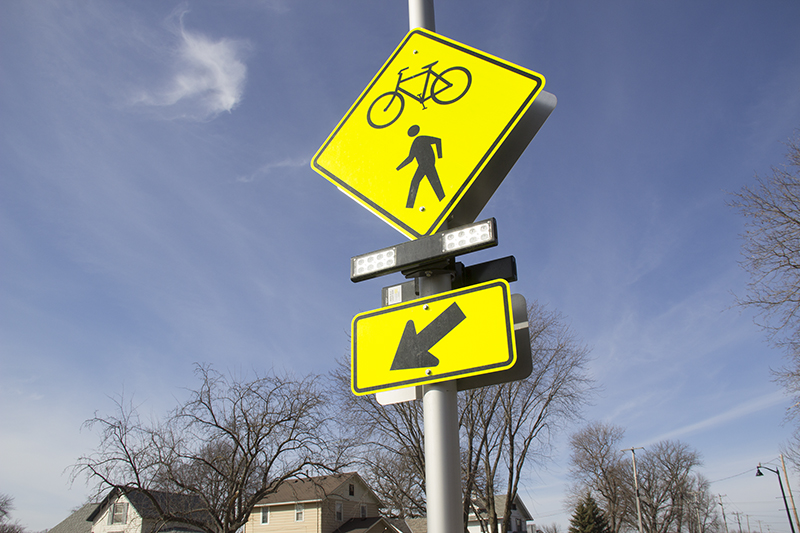 The Bridge Avenue intersection with Hawthorne Street presently has rapid rectangular flashing beacons that light up when a pedestrian is crossing. Sarah Stultz/Albert Lea Tribune

She also questioned whether the stoplights should be brought back or if the intersection should become a four-way stop.

Busall recently posted her concerns on the “You Know You Are From Albert Lea” Facebook page, encouraging other people to contact city and county engineering staff about the issue.

She said she has a 7-year-old child with special needs and a newborn, and the family avoids the intersection with her children because she does not feel it is safe.

She also referenced a concern about poor visibility for drivers stopped facing eastbound on Hawthorne at Bridge Avenue.

The intersection was brought up briefly at the Freeborn County Board of Commissioners meeting on Tuesday and is expected to be discussed in more detail at a future workshop.

Fifth District Commissioner Ted Herman asked if the lights were as bright as they could be to get people’s attention during the day. He also questioned whether hoods were being ordered to go on the top of the lights.

Freeborn County Engineer Phil Wacholz said the hoods have been ordered and will be installed this spring. He said he is also working to verify that the lights are working properly to get people’s attention.

Second District Commissioner Dan Belshan is questioning whether the area should be identified as a school zone and be given a lower speed limit.

Wacholz said if the board wanted to look into this option, a traffic study would need to be conducted and the results would go before the Minnesota Department of Transportation commissioner. This is an important tool when used correctly but would be implemented after addressing eight other items, including traffic volumes, traffic control devices, sidewalk analysis, use of fencing and crash history.

Wacholz said the traffic lights were ultimately removed from the intersection after a safety analysis of the corridor. The analysis showed there were 20 crashes during a five-year period, and out of that number, 13 were rear-end collisions. He said that was a symptom of a signalized intersection that wasn’t warranted.

He noted traffic lights are more difficult to remove through the state once they are in place and said a signal has to meet 80% of the warrant volumes to be considered justified. If the intersection has less than 60% of the warranted volumes the signal is considered unwarranted.

Wacholz said there are many factors he and other engineers consider when looking at intersections for safety and noted that the Bridge Avenue and Hawthorne Street intersection has many of those key characteristics, including sidewalks, no parking on Bridge Avenue, no parking on Hawthorne Street with 50 feet of the intersection and good sight distances. The sign distance will further improve for traffic looking to the north from Hawthorne when the front yard on that side is blended back to allow for better visibility for both cars and pedestrians.

He said the road at 30 mph gives enough time for cars to respond for pedestrians and noted the importance of traveling at safe speeds.

The road also has a single travel lane in each direction — as opposed to a multi-lane road — along with short crosswalk distance and intersection lighting to help with visibility.

“In many other instances, we don’t have the benefit of those items,” he said. “Add to that an adult crossing guard in the mornings and afternoons.”

The county engineer talked about the importance of traffic safety education for children of all ages — whether through parents, educators or others in the community.

“Ultimately, there’s parents and us as a community who need to make sure that any children who are crossing streets anywhere in town have the practice and training to traverse those areas,” he said.

He noted though his comfort level is relatively high with the current arrangement of the intersection, he wanted to emphasize that he will continue to look at options brought forward by the community and the county board.

“I’m not done making sure we have the Hawthorne intersection where we want it to be,” he said. “This is on my mind a lot, and we’ll continue to be looking at it.”

Construction slated to begin again at end of March

Wacholz said as long as weather cooperates, construction activity will likely pick up again at the end of March on Bridge Avenue from the Freeborn County Fairgrounds to Richway Drive. He said the goal is to get that section done and open to traffic as soon as possible.

There will also be some parallel work done north of Richway Drive. When the stretch from Richway Drive to Hammer Road will be closed has not yet been determined.

Wacholz said as soon weather conditions allow, landscaping and concrete work that needs to be finished on the southern portion of Bridge Avenue will be finished.

He asked that drivers slow down and honor temporary traffic controls put in place during construction.