The voices behind the line 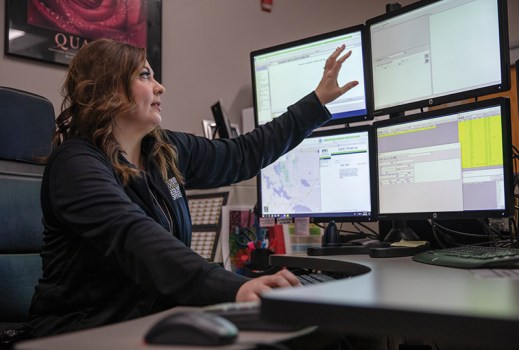 Karina Arnold shows some of the screens the dispatchers use while doing their jobs. Hallie Cantu/Albert Lea Tribune 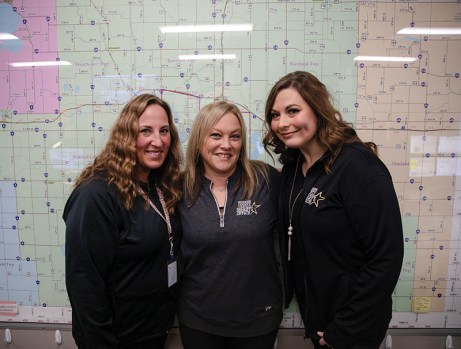 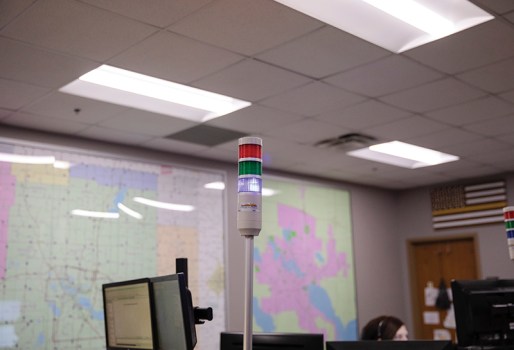 Call lights in the dispatch room light up with a different color depending on the scenario. Hallie Cantu/Albert Lea Tribune 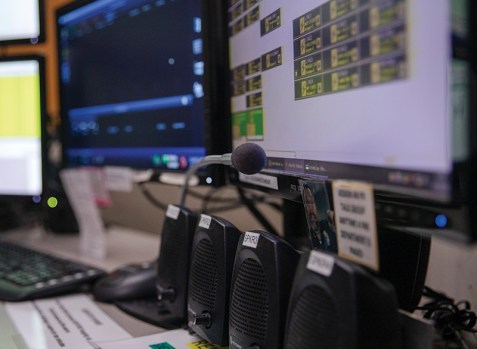 Inside the dispatch room shows all the equipment the dispatchers use to do their job. Hallie Cantu/Albert Lea Tribune 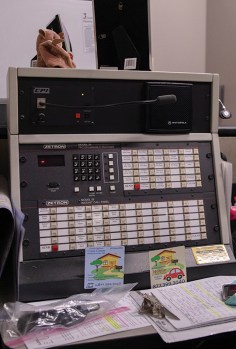 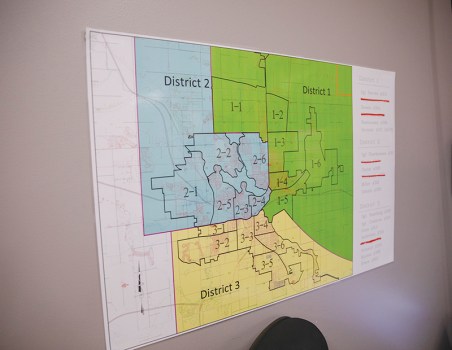 A map in the dispatch room shows how the the city is divided up for community policing. Hallie Cantu/Albert Lea Tribune 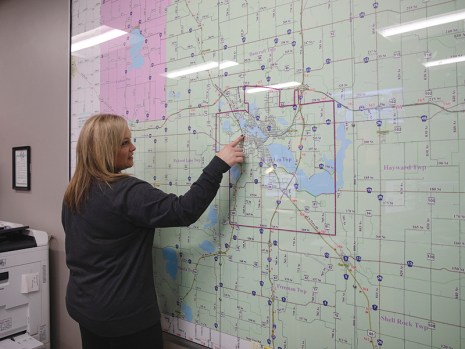 Lundak points to one of the many maps in the dispatch room. Hallie Cantu/Albert Lea Tribune 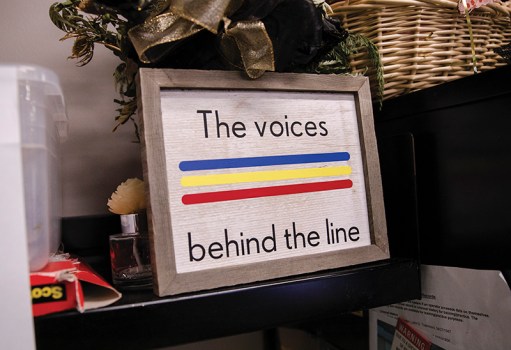 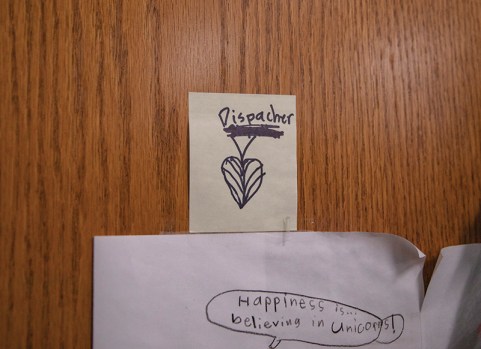 Artwork made by kids of dispatch workers and police hang throughout the walls in the dispatch room. Hallie Cantu/Albert Lea Tribune 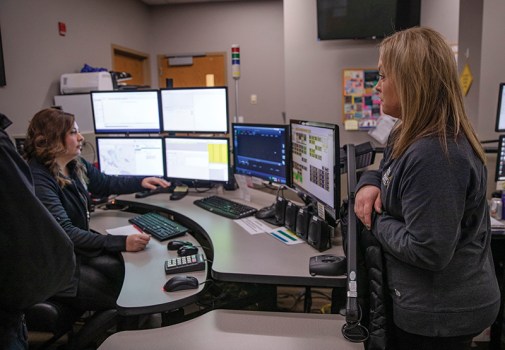 Karina Arnold and Cheyenne Lundak go over the process behind the calls. Hallie Cantu/Albert Lea Tribune 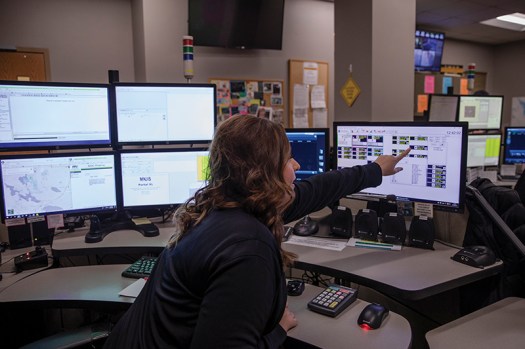 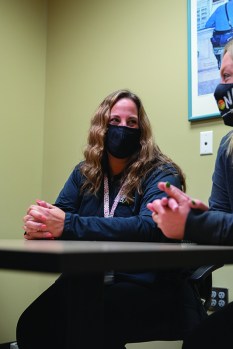 Jodi Olson goes through a day in the life as a dispatcher. Hallie Cantu/Albert Lea Tribune 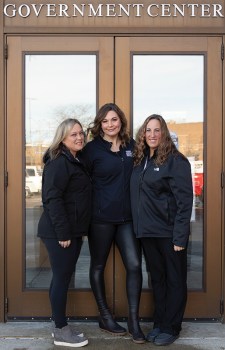 Freeborn County dispatchers find purpose in helping others through their job

Individual signs — each a different color — are encased by plastic page covers. They hang on cabinet storage doors in this room at the Freeborn County Government Center.

The simple sayings, in the backdrop of a bevy of communication technology, minimize the complexity of the dispatch work done in the room, yet speak to the impact the daily effort has on them and their community.

It’s what they do, what they believe, and who they are.

The job is hard. But they don’t want to do anything else.

“For every task, response and call, we are all for one and one for all. Not one member stands apart — we stand together with strength and heart.”

— Olson’s words on a green sheet

There are three stations, or consoles, in the dispatch room. Each has six monitors — one to maneuver between audio channels; one that identifies calls by type and urgency; two for tracking incidents; one for searching databases; and one for mapping.

It’s an imposing setup, but the functions allow for the quick thinking needed for the job to be just a bit easier.

And that can make all of the difference.

“It’s a lot of multitasking,” said Arnold, who has been with dispatch for six years.

At one of the stations, at all times, is a 3-inch three-ring binder with dividers. It’s stuffed to the brim with paper. The outside, inserted cover reads “Dispatch Bible.”

Lights behind each of the station’s monitors stand close to 6 feet and have red, blue and green indicators. Different lighting combinations mean different things, such as availability or on a call.

The monitors are a lot like screens in many work spaces: sticky notes cover the edges with reminders and password hints.

The channel monitor is branded Motorola. There are tabs for the different local, regional and state channels, as well as paging options for specific officers.

Differentiated ringtones (for 911 and non-emergent calls) are duplicated on the call screen. It works through priorities for the calls, based on type and urgency.

The two incident monitors are similar, but one is more locally focused and the other focused on Minnesota. There are forms and fields to quickly fill to transfer information to the field — caller information, people involved, location, type of call, response needed and more. One window lists available units on duty; another serves as an instant messaging-like program to communicate sensitive information that shouldn’t travel over airwaves — like Social Security numbers or, if brevity demands it, a joke.

The final monitor is dominated by Google maps. There’s also a smaller window with a link to the Department of Corrections (to check on parole issues). But the map helps dispatchers more often and includes the option of displaying moving law enforcement vehicles in the area.

A large box next to the station closest to the main door is a reminder of how dispatch work was done in the past. Lower on the technology end, and leaning heavily toward the big speaker and large white buttons end.

“For me,” Lundak said, “I was always interested in what (dispatchers) did and how they did it. I love it.”

“To the world, you may be only a voice in the phone, but to your caller, you are a HERO.”

— Arnold’s words on a blue sheet

This trio’s training was on the job.

Olson previously worked as an EMT and was recruited to the dispatch side by Arnold and Lundak.

“We were friends before, so it’s worked out OK,” said Olson, in her fifth year as a dispatcher.

And she had heard their stories and their pride.

“Most people want to go in and make a difference,” Arnold said. “It’s a great feeling that we are helping when people are calling on their worst day.”

Riverland offers a certificate in public safety dispatch that requires seven courses and 17 credits. But most of what’s required at the Government Center is on-the-job training.

“It’s not for everyone,” said Arnold.

“It depends how quickly you catch on, when you have that ‘ah-ha’ moment,” Lundak said. “For me, it was one year in.”

The three spoke positively about the Riverland certificate option, but Lundak, the veteran of the group with 13 years behind the monitors, specifically pointed to a seminar offered by FBI hostage negotiators as key.

The Freeborn County crew rarely deals with hostage situations, but the techniques are similar for a range of situations.

“I’ve used so much from that course in normal calls,” Lundak said.

Notably, the course roadmapped options for dealing with the mentally ill, a regular component of calls to the center.

During the day, at least two dispatchers work the calls; at night, it could be as few as one.

If someone is working solo, the most used button in the room is mute. The dispatcher can be juggling multiple calls, multiple agencies, multiple officers. Verbal cues will tell a lot.

“Our tone sets the scene for the officers,” Lundak said. “They can tell by our tone if it’s big, if it’s serious.”

If there is more than one on duty, teamwork kicks in. As one takes the call, the other starts contacting the right agencies.

“We try to help gather more information,” Arnold said. “Who is there, which room are they in, are there weapons, what kind, where are the weapons?”

Dispatchers remain on the line until officials arrive at a scene, and they remain available until a scene is cleared. Oftentimes, that can last hours.

All the while, the other calls do not wait.

“I don’t think people realize the number of calls in the county,” Lundak said. “When people say I’m ‘just a dispatcher,’ that really grinds me.”

“Sometimes COURAGE is the quiet VOICE in the dark saying, ‘HOLD ON’”

— Lundak’s words on a yellow sheet

Olson was working the overnight shift on that infamous Sunday in late November in Albert Lea.

A noise complaint was called into the center at 2:18 a.m. Eight and a half hours later, one person was arrested for shooting three, including a police officer.

When asked what was the worst call, Olson, who is also a medical examiner, was the quickest to answer.

“That was the hardest, by far,” she said. “I’ve felt 100 times closer to everybody here since then.”

Added Arnold: “I don’t want to hear shots fired ever again. It may be only 30 seconds until we hear something else, but it feels like five minutes.”

The worst calls for the others were as unsurprising as they were difficult to hear.

A 2-year-old was not breathing. Mom could be heard in the background, as well as Dad performing CPR. A sibling talked to dispatch.

“I have a dream every now and then where I hear the counting as he’s doing CPR,” Lundak said.

A suicide at a family home. The family was there.

“I was fresh off training…,” Arnold said. “Even when we try to not show emotion, we’re all parents. It doesn’t go away.”

But the most difficult calls are still worth the feeling of helping others in their community when they need it the most.

“It’s hard in Albert Lea because everyone knows everyone,” Lundak said.

And there’s the variety, as well. No day is the same, and the calls will cover a wide spectrum.

“One call will be about a cow on the highway, and the next is a family finding their dad dead. Someone’s worst day versus something super minor,” Arnold said. “Life is short, and we see so much of that, knowing in a matter of seconds, your world could be turned upside down.”