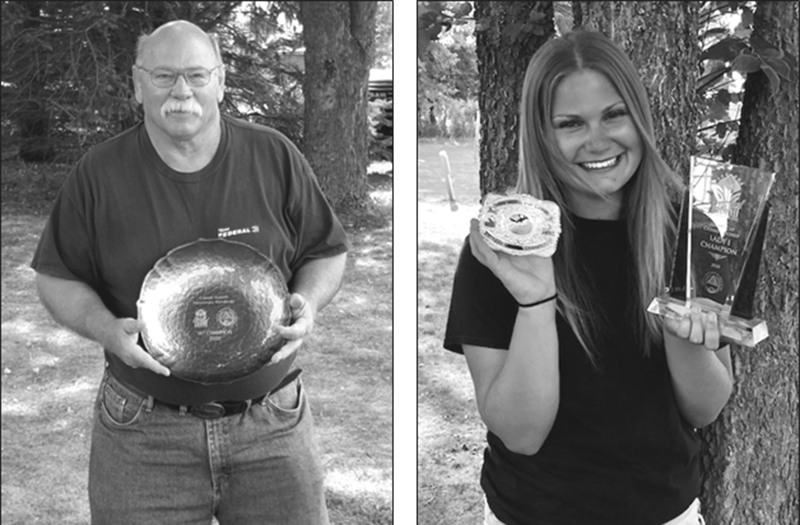 This was the third year the duo has competed with 500 to 600 trap shooters across the United States, and both of Alden’s shooters brought home trophies.

“This year at the Spring Grand, I won Lady I champion in the Caeser Guerini Preliminary Handicap event. The Lady I category is any female who is under the age of 55,” Petersen said.

Newman said, “I tied for first place, but lost in the shootoff and ended up winning Class B runner-up in the Double Class Championship event.”

“We started off teasing each other about going to Arizona, and then the next thing we knew, plans were made, and we really did go. It’s fun to compete at big shooting events, which is another reason we chose to go to the Spring Grand,” Newman said. “We thought it would be fun and we were able to get out of the Minnesota winter for a while. Shirley’s folks used to stay in Tucson, and so it’s fun reminiscing while we are there. We also enjoy the mountains and scenery while in Tucson.”

“With this event being held mid-February, it’s great to travel to Arizona to get away from the Minnesota winter and enjoy some sunshine,” Petersen said. “However, the first year we attended this event we had snow in Tucson!”

The duo began to shoot together after Newman saw the love and interest Petersen had for the sport.

“Bob invited me to go with him to compete in Fairmont at the Scheel’s shoot in 2017. This was my first-time shooting ATA. It was a small shoot, but I discovered my love for the competition of trapshooting. From that moment, I was hooked, and my family and I began traveling to many competitions with Bob.”

Petersen now has six years of shooting under her belt.

“I started shooting in sixth grade for the Alden-Conger High School trap shooting team when my brother, Riley Petersen, was a senior. Riley was a great trap shooter, and I looked up to him! I wanted to be on the same team as him, so I decided to sign up and give it a try.”

According to Newman, “I used to tease Ali about beating Riley some day when she little.”

Newman began shooting in the late 1960s with his cousin, Steve Newman. “He got me interested in the sport. We went duck and pheasant hunting all the time and then he asked me to be on his team in Alden. At that time, Alden had a trap range out by the ponds (sanitary ponds lagoons) that opened in the late ’60s. I remember Steve bought a reloader and the two us loaded our shells each week for us to shoot.”

“When the interstate came through town, the range had to be shut down. Freeborn, Bricelyn and Glenville also had local trapshooting. I enjoyed shooting at all three of those ranges. In 1978, I quit trapshooting after getting married, having children, farming and working in town. I just didn’t have time anymore with family and work. I picked back up trapshooting in 2000, when Alison, our youngest daughter, graduated and the Freeborn trap range reopened and I got on a team there. I have been shooting every year since. In 2004, I started shooting at ATA registered events.”

While competing in the Amateur Trapshooting Association’s Spring Grand, the Alden duo took part in competitions of shooting singles, doubles, and handicap.

Newman, who said his first team probably had the most influence on him, stated he continues to learn valuable information from all of his trapshooting friends. “I have also looked up to my friend, Jim Lembke, formerly from Alden, as he is a Minnesota ATA Hall of Famer.”

“I have had many shooting mentors that I look up to,” Petersen said. “I have learned so much over the years from my brother, Riley, good friend, Luther Langrud, my parents, my high school trap coaches, and my many ATA friends.”

However, Petersen said, “Bob is definitely my biggest mentor! We both enjoy shooting together. He gives me advice and has helped me gain confidence and skills over the years. We have so much fun together! One of our trapshooting traditions is to always wear our matching purple Federal Ammunition shirts for singles championship day. Another tradition Bob started is whoever has the highest score for each event has to dance for the other. Bob always asks, “Who is dancing this time?” A favorite memory of mine was last year when Bob and I were shooting singles together and I shot a 99 and he shot a 98. Bob was so excited for me that he bowed down to me. He loves to see me shoot well!”

Newman responded, “When shooting with Ali, he most enjoys seeing who is going to DANCE at the end of each round of competition!”

Newman said his favorite memory was the exact same as Ali’s — when she shot the 99 and he shot the 98 and he had to bow down to her.

“I also enjoy teasing Ali, Mike and Linnea about trap shooting and the great times our two families have had together,” Newman said.

As far as achievements, both shooters have numerous awards.

“I have multiple awards for both high school trap, ATA competitions, and AIMS competitions, said Petersen, who is also a member of AIMs, which is the youth ATA program that promotes Academics, Integrity, and Marksmanship.

“I’ve shot a 99 a few times, but I am still waiting for that 100 straight! Maybe this year will be my lucky year!”

Petersen’s favorite trophies are from this past August when she shot at the Heartland Grand in Ackley, Iowa. “I won a belt buckle for shooting a 99 in singles winning B Class champion and beautiful glass trophy for winning the Lady I handicap championship. I’m also proud to have made the Minnesota Sub-Junior All State Trap Team in 2019 and the Minnesota Junior AIM All-State Trapshooting Team for 2021.”

According to Petersen, Newman has won numerous awards for ATA competitions over the years. “I have been on the line with him several times when he has shot 100 straight. I hope to be there when Bob shoots his first 200 straight!”

Newman replied that making the Minnesota State Trap Team for three years is one of his biggest achievements.

“I won various prizes at various competitions,” said Newman. “My favorite prizes have been while competing at the Minnesota State Trap Shoot. I was happy to win a shamrock leather bag for the memorial handicap event and to win the AA singles shoot with 199 out of 200.”

Both shooters’ favorite local trap range is the Owatonna Gun Club. They said they enjoy getting in some extra practice there throughout the year, participating in their summer leagues, and competing in ATA events held there such the Cabela’s shoot.

One thing Petersen enjoys the most about shooting ATA trap is all the wonderful people and friendships she has made throughout the years.

“I have met amazing friends from all across the United States! In Tucson, Bob and I shot with our good friends Dan and Tommy Eckstrom from Annadale, and my good friend, Sophie Nostrom from the state of Washington.”

Newman also enjoys the people and friends he has   made at trap shooting events over the years, “And I hope to continue to make more. Nobody cares what you shoot—it’s just you and the birds— you are not in competition with anyone.”

“Shooting ATA is for people of all ages and abilities,” said Petersen. “I love that everyone on the range is happy for you no matter what score you shoot. It’s like a big family!”

Newman agrees. “No matter what age you are you can still participate in this sport together. Age isn’t a factor. I can compete with the younger ones on a level ground and still hold my own.”

Also, said Newman, each day of trapshooting is different. “The weather plays a factor. You could be shooting in the wind, rain, or snow. Some days you can’t miss a single bird when shooting to win. You can shoot a 199 and all you are going to get is an “atta boy”. On other days, you can have a tough day and shoot lousy and still win! One of my common sayings after an event is ‘If I only had one more bird’!”

Ali is the daughter of Mike and Linnea Petersen, and sister to Riley (22).

“I have been helping my grandsons Cody and Wyatt learn to shoot over the last few years,” said Newman. “Both boys also shoot for the Southland High School Trap Team. I enjoy shooting with them in Austin and Owatonna. The boys both hope to shoot ATA someday with me too!”